The Day After: A tough start, but it’s far from over… 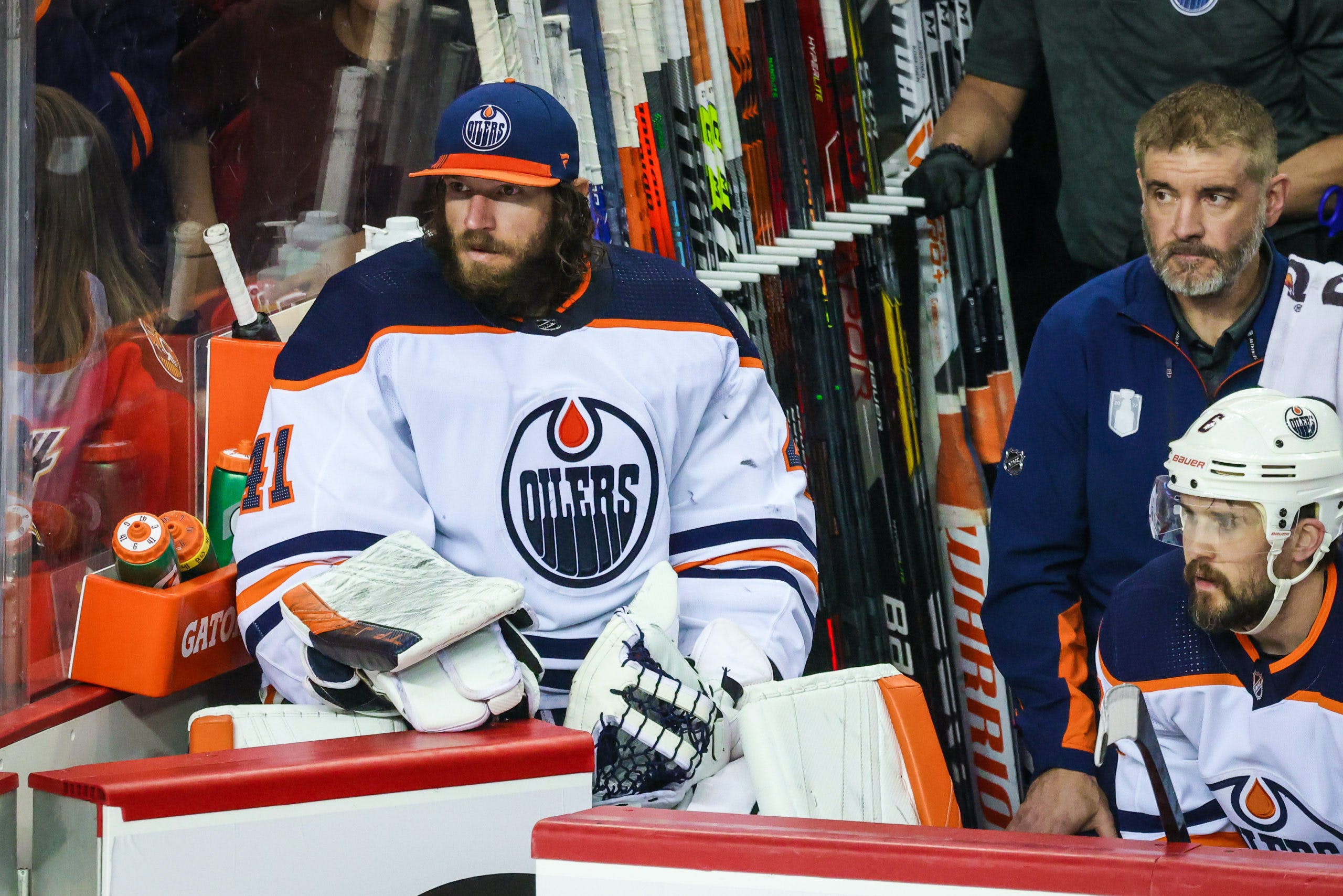 By Zach Laing
6 months ago
It’s safe to say nobody expected what happened in Calgary on Wednesday night in game one between the Flames and Edmonton Oilers.
I mean, who could’ve predicted it would’ve been the ninth highest-scoring game in playoff history?
Things were far from perfect for the Calgary Flames, but even worse for the Edmonton Oilers who had an all-too-familiar feeling walking out with a 9-6 loss.
But after all, it took 51 seconds for the Oilers to go down 2-0 with the Flames scoring on their first two shots, and allowed another five minutes later. To say Edmonton was flat would be, putting it quite mildly, understating things.
“To a man, not one of us was anywhere near we needed to be when we started the game,” said Oilers head coach Jay Woodcroft. “You don’t draw it up giving up two goals on missed assignments on the first two shifts.
“We gave up a goal at the start of the second period as well. We fought back and made it a game, but we can’t feel good about that in any way, because you scored six goals in a game and found a way to not win it.”
It was, all around, a terrible, horrible, no good, very bad day for these Edmonton Oilers.
Truth be told, the rot was deep in this one. Mike Smith set the tempo of the game by allowing two goals on his first three shots, and the third on the Flames’ fifth shot. Mikko Koskinen wasn’t much better in the long run, coughing up five goals on the 37 shots he faced by the end of the night.
A product of the Oilers chasing the game, Darnell Nurse and Cody Ceci were out for just one goal for and five goals against. Leon Draisaitl and Connor McDavid were out there for three and four goals for but were also out for four against, respectively. The list goes on.
In fact, by the end of the night, somehow the only three Oilers who weren’t out for a goal against were Brett Kulak, Kris Russell and Zack Kassian, although neither of these three was very good at all, either.
The latter of the three, someone who the Oilers rely on to provide physicality and emotion in a depth role, finished the first playoff Battle of Alberta in 31 years completely blank on the scoresheet, save for two penalty minutes during the game, in which the Flames used to score. That’s right, though, nothing on the stat sheet. Not a hit, not a shot, nothing.
One player who really stepped up when he was called upon, however, was Zach Hyman. He had massive back-to-back goals in the middle of the second frame that helped take Edmonton from being down 6-2, to 6-4, which turned to a 6-6 game early in the second. But from there, the wheels fell off.
“In between periods, we talked about the team that’s going to get to their defensive game first was going to win that game,” said Woodcroft. “We turned some pucks over after it was 6-6, and it ended up in the back of our net, so not good enough. As I said, we scored six goals on the Calgary Flames in their building on their starting goalie. That should be enough to win the game.”
Ultimately, it was once again Connor McDavid who was a determining factor in the success the Oilers had. He finished with a goal and three assists and was the most active Oiler in the physicality department leading all Edmonton skaters with five hits. Get in line, everybody.
But in Jay Woodcroft’s eyes, physicality isn’t just about laying hits on the ice.
“I think if you look at the game sheet, Connor led our team in hits tonight. It’s a good thing for him because he’s playing hard, but we can have more physical attachment to the game,” he quipped.
“To me, that’s not even the finished check or the scrum, it’s the 50/50 battle, it’s body position net front, how hard you are around your blue paint, how hard you are in front of the blue paint.
“We weren’t good enough to man, all of us.”
This is one of the many areas the Oilers need to improve on come Friday night in a building they’ve won hockey games in before. There’s no need to panic, either. While things were different in game one against the LA Kings, Edmonton still walked out down by one game. In response? They went back to work, took a look at what went wrong, and outscored the Kings 14-2 in games two and three. Will that happen against Calgary? I doubt it.
But at the very least, the Oilers know they have to respond with a much better performance. There are no ifs, ands, or buts about it.
After all, it is a seven-game series for a reason.

In the first round, the Calgary Flames played a low-scoring, tight-checking, trench war of a hockey series against the Dallas Stars. The games were fairly entertaining, but admittedly could’ve featured more offensive highlights. Well, that wasn’t an issue in Game 1 of their series with the Edmonton Oilers.
In a track meet of a hockey game, the Flames held on for an 9-6 victory over the Oilers to take a 1-0 lead in this series.
This game was nuts, and way closer than it should’ve been given which team carried play. The Flames were way better at puck possession and shot (and dangerous shot) generation in the offensive zone. They were leaky defensively, though, and in their own zone their puck luck resembled what they got for stretches in the Dallas series: their mistakes away from the puck resulted in Oilers goals.
Markstrom was also nowhere near as sharp as we’ve seen him in the past seven games, and nowhere near how sharp the Flames needed him to be. But the Flames were able to out-score their challenges, at least in Game 1. – Ryan Pike, Flamesnation