The Day After: Leon Draisaitl scores a hat-trick and Mike Smith records his first shutout in dominant win in Nashville 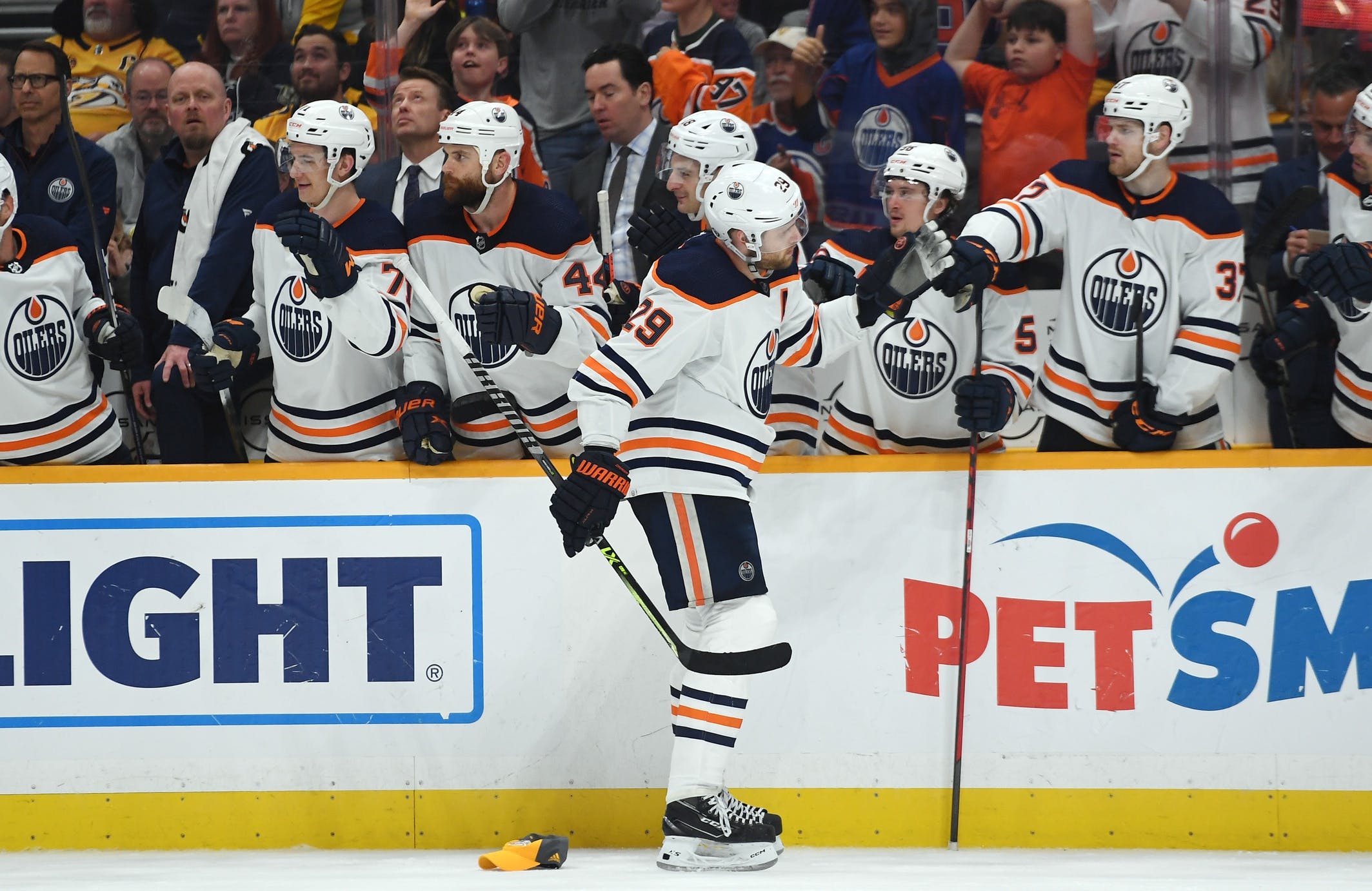 By Cam Lewis
7 months ago
That’s how you bounce back.
After an ugly effort on Tuesday in which the Oilers got pounded by a score of 5-1 to the Minnesota Wild, the team rebounded nicely in Nashville with a dominant 4-0 win over the Predators.
Leon Draisaitl scored a hat-trick, reaching 54 goals for the season, while Mike Smith put up his first shutout of the season, becoming the first 40-year-old to do so in an Oilers uniform since Nikolai Khabibulin.
While Minnesota has owned the Oilers for multiple years now, the same is the case with the Oilers and Nashville. Edmonton swept their season series with the Preds with Thursday’s 4-0 win. The Oilers’ winning streak over Nashville is now at six games, extending back to February of 2019.
You can see why the team chose Nashville as a destination for a Nation Vacation.
It’s very positive to see the Oilers bounce back and put together a big performance after an ugly loss. In the Jay Woodcroft era, the team has done a good job at not going completely cold and letting things spiral out of control.
For example, following that absurd 9-5 loss to the Calgary Flames, the Oilers bounced back and won their next game against the Arizona Coyotes by a score of 6-1. When they lost back-to-back games against the Colorado Avalanche and Dallas Stars right after the trade deadline, they came home and beat the San Jose Sharks 5-2. In early March, the Oilers went on a three-game losing streak highlighted by an embarrassing 5-2 loss to the lowly Montreal Canadiens, but they then went on a five-game winning streak that featured impressive wins over the Tampa Bay Lightning and Washington Capitals.

“We knew that in order for us to walk away with two points, we needed everybody firing on all cylinders. We came at that team in waves tonight, we skated well and we asserted what we wanted to do on them.” – Head coach Jay Woodcroft
“Sometimes you just have a team that it seems to work a little better against them than others.” – Leon Draisaitl on scoring his 19th goal in 20 career games against Nashville.
“If I can get there, it’s great I’m not going to try and stop scoring, but I’m also not going to force this, you know? So whatever happens, happens.” – Draisaitl on reaching the 60-goal plateau.
“It’s not how you start. It’s how you finish. It’s been a different season, but all you can control is your next game, and I feel like I’ve been really focused on that. I feel good in the net, and that’s all it counts.” – Mike Smith on his first shutout of the season.
“Holy (bleep), Smitty!” – Matt Duchene after Smith robbed him early in the third period.