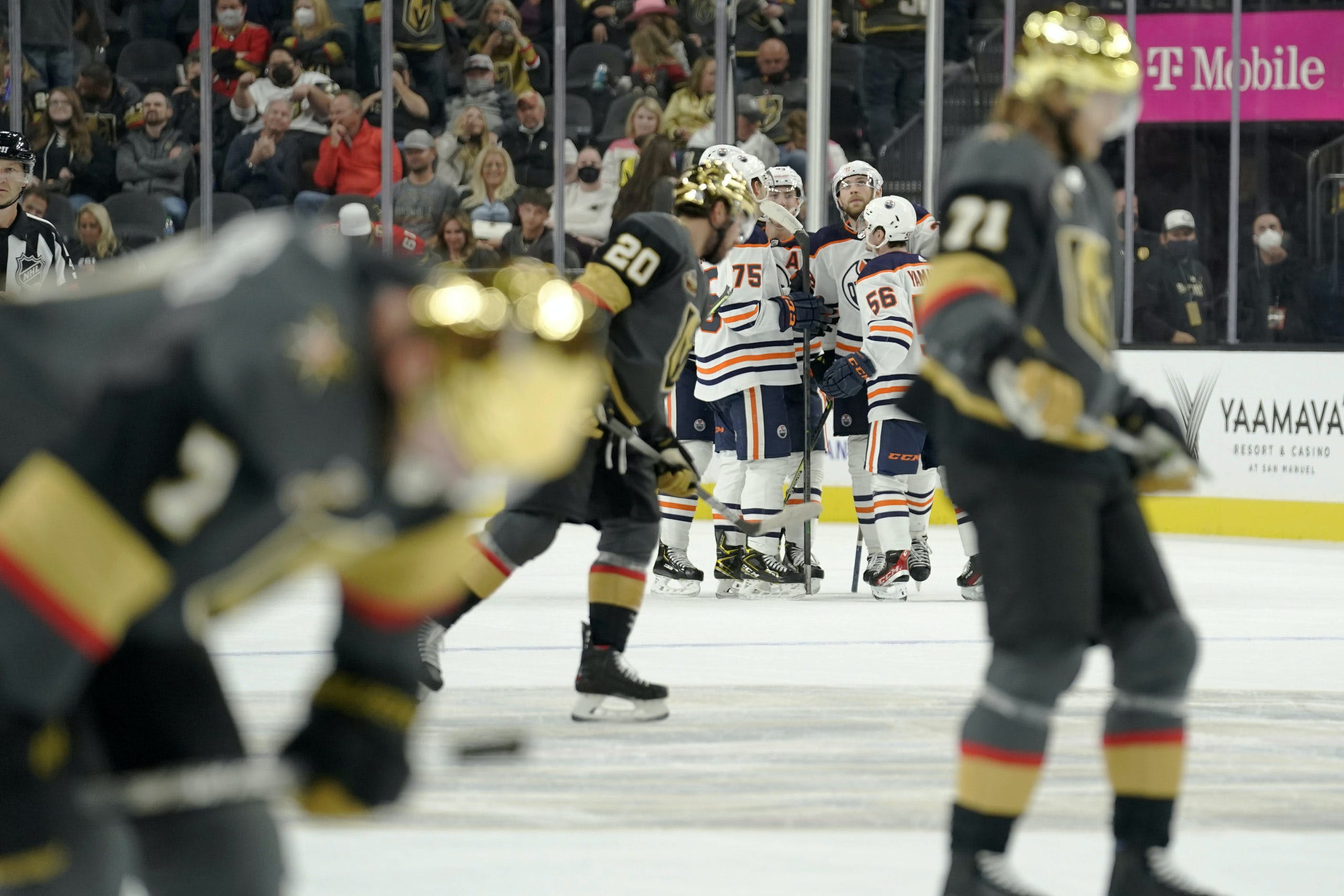 By Robin Brownlee
1 year ago
As much as I liked the odds of the Edmonton Oilers winning the Pacific Division before the season started, I didn’t expect that we’d see a 15-5-0 record at the quarter-mark of the schedule, even under the best of circumstances. What we’ve seen has not been that. Far from it.
My biggest question about the roster Dave Tippett had to work with when the season began was whether the addition of Zach Hyman and Warren Foegele would provide enough scoring depth and balance up front. After that, how would Duncan Keith and Cody Ceci fit on the blueline? How would Evan Bouchard respond to playing more minutes on a regular basis?
While answers to those questions have yet to play out completely, the story after 20 games for me has been how resilient this group of players has been along the way. The Oilers got three games out of starter Mike Smith before he hobbled out of the picture. In Smith’s place, Mikko Koskinen and Stuart Skinner have taken over the paint. Anybody expect Koskinen and Skinner to be as good as they’ve been these past 17 games? No you didn’t.
More recently, Tippett lost the left side of his defence. Darnell Nurse (broken finger) and Slater Koekkoek went out four games ago. Keith twisted or pulled something and went out two games ago. So, Kris Russell comes in and takes big minutes. In steps raw rookie Philip Broberg along with William Lagesson.
What could have been an upside-down-on-fire-in-the-ditch wreck has instead seen the Oilers go 3-1-0 since Nurse went out. That’s resilience. That’s moxy. That’s the story. 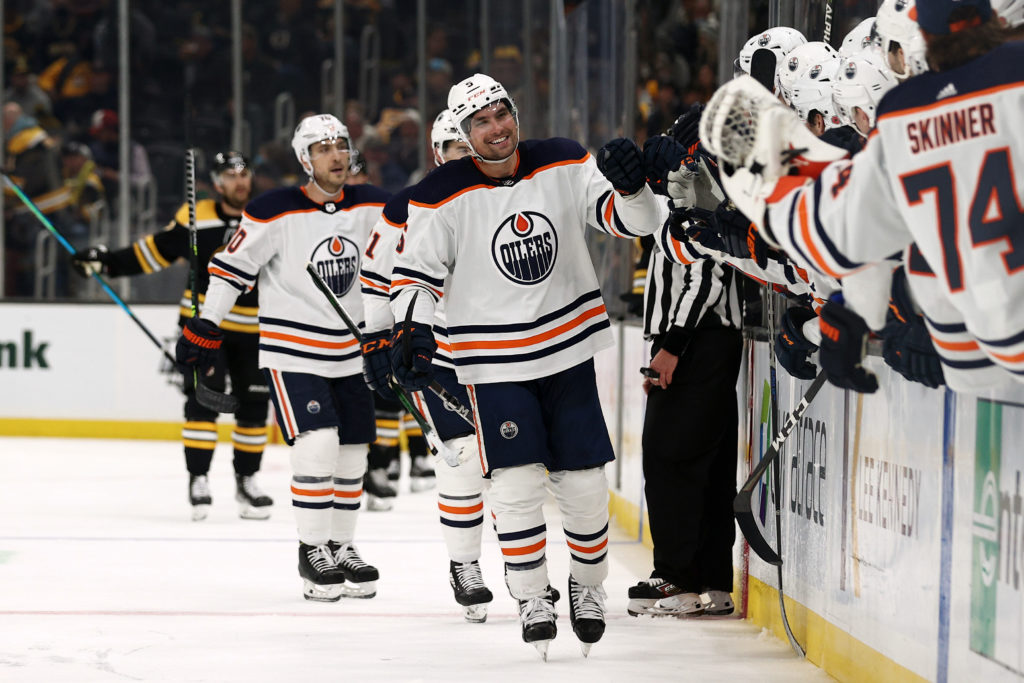 Nov 11, 2021; Boston, Massachusetts, USA; Edmonton Oilers defenseman Cody Ceci (5) is congratulated after scoring against the Boston Bruins during the third period at TD Garden. Mandatory Credit: Winslow Townson-USA TODAY Sports
As an added kick in the pills, Ceci was placed in COVID protocol by the team, this morning and Markus Niemelainen was recalled from Bakersfield. He’ll be added to the blueline mix when the Pittsburgh Penguins come calling tomorrow. Suffice to say, Tippett will need more of the same jam from this group.
Anybody paying attention these last several seasons can remember rosters thin enough that even having Connor McDavid and Leon Draisaitl tearing it up wouldn’t be enough to make up for losing a starting goaltender and half the defence. Yet here they are with the second-best record in franchise history after 20 games — the Oilers were 16-3-1 in 1983-84.
“You can always think what players might do, but until they get thrown into a situation you never know how they’ll react,” Tippett said before the team cancelled practice today in the wake of Ceci being put in COVID protocol.
“We’ve had some players come in who don’t have a long track record, and been thrown into tough situations because of the injuries, and they’ve responded very well. They’re still young players. They have lots to learn yet, but their first steps in the NHL have been pretty solid.” 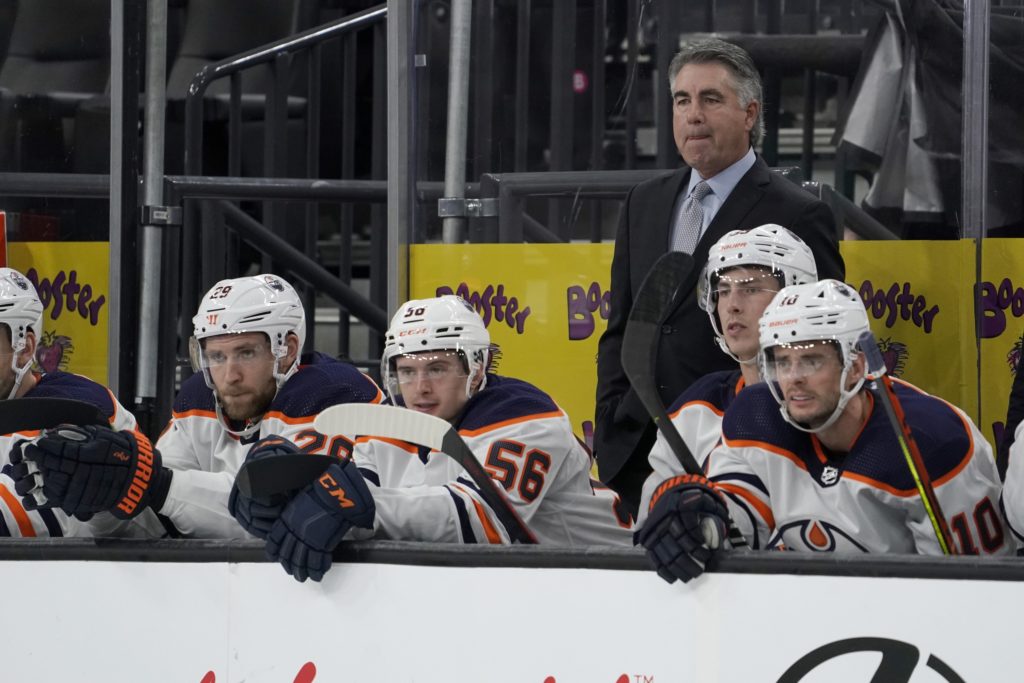 Oct 22, 2021; Las Vegas, Nevada, USA; Edmonton Oilers head coach Dave Tippett looks on in the third period against the Vegas Golden Knights at T-Mobile Arena. Mandatory Credit: Lucas Peltier-USA TODAY Sports
What we’re seeing because of the injuries is an expedited learn-as-you-go process. Skinner and Broberg have opened some eyes since being pressed into duty. Next, we’ll see what Niemelainen can do. While there’s no guarantee being thrown into the fray means they are ready to stick when everybody is healthy, having these young players step up as they have is a big part of that 15-5-0 mark and it could pay dividends down the road.
“They’re a close team,” Tippett said. “The new guys who’ve come in have been welcomed with open arms, and the chemistry is very solid. With some of the injuries we’ve found out about our depth . . . it’s been a good start, but we’ve got lots to work on to get to where we want to go.”