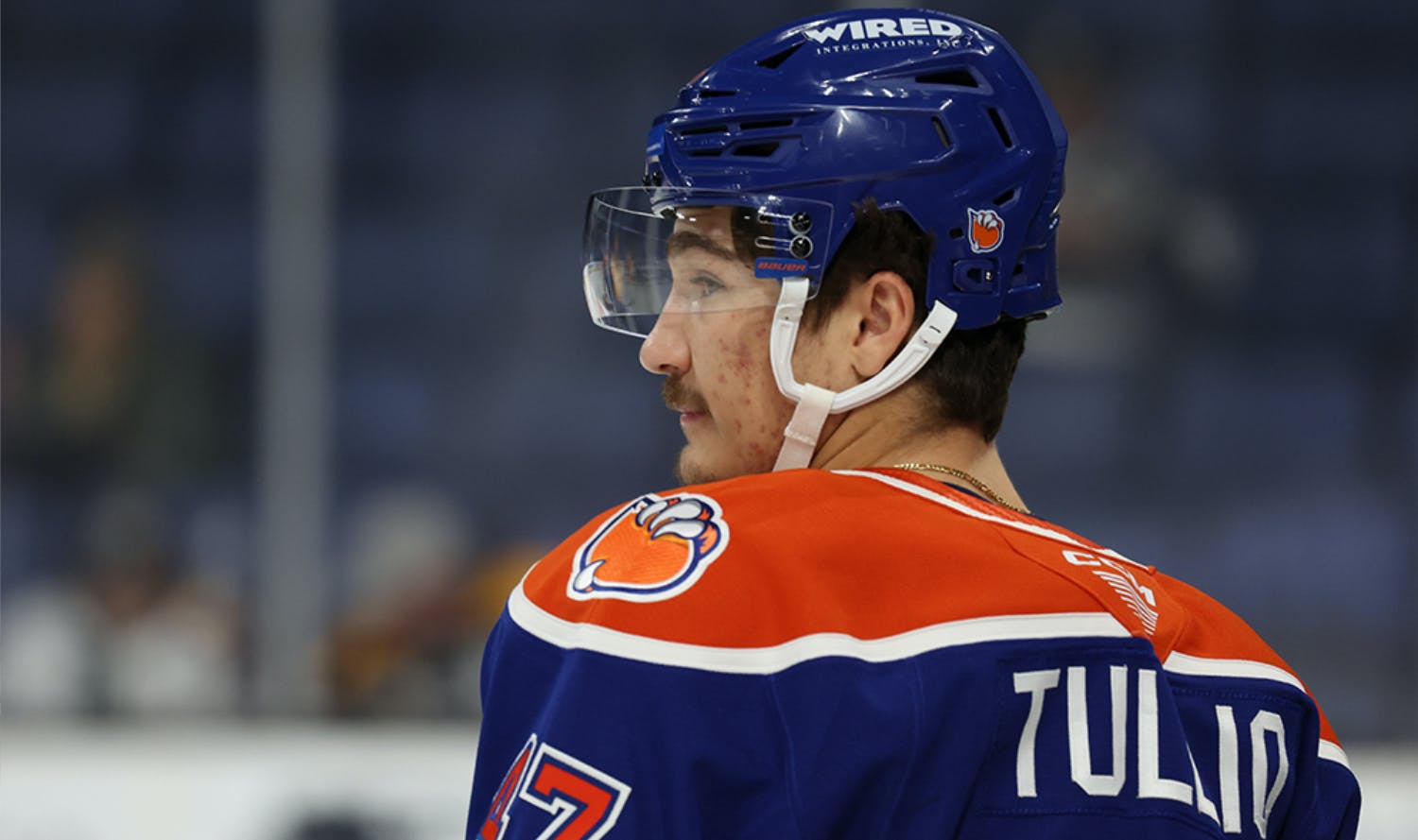 By Bruce Curlock
1 month ago
Hi folks. My name is Bruce Curlock. Zach Laing and the tall foreheads at Oilersnation have graciously offered me the opportunity to provide a weekly review of Oiler prospects.
For those who have seen some of my work on Twitter, I try to focus on players who are having some recent success and use video to illuminate parts of that player’s game that have led to success. The weekly article will not touch on each prospect, but on those who have had notable weeks for the most part. On rare occasions, I will delve into a player who is having some struggles and try to illustrate why that might be the case. Finally, I will rarely discuss prospects who have graduated to the Edmonton Oilers whether on a part-time or full-time basis unless they return back to the minors. For this week’s article, I will focus on some players who have started the year well and are trending in the right direction. So with that preamble, let’s dive into this week’s review.

Who Has Caught My Eye?

The 2021 first-round pick of the Edmonton Oilers has been the most consistent Bakersfield forward save for James Hamblin who is with the big club.  After 22 games, he is 8-5-13 good for second on the team in scoring and tied for the team lead in goals. This is no small feat for a twenty-year-old rookie in the first twenty games of his pro career. What is absolutely his defining skill is his offensive zone prowess. The three aspects of this skill for Bourgault start with his constant motion of the puck into positive space. Here is an example.
The other aspect of this skill is his vision. His ability to find players in better positions than him and execute passes to them is excellent.
Finally, and some will accuse me of burying the lede, his hands. If these clips don’t remind you of Jordan Eberle, you never saw Jordan Eberle.
Now, for all of this offensive prowess, I do believe that Bougault’s scoring will come from inside twenty feet. In this, he again reminds me so much of Jordan Eberle.  Take a look at these goals.
If you doubt, take a look at this clip with goals by both Bourgault and Eberle.
Briefly, I want to touch on another important skill for Bourgault. Xavier Bourgault is an absolute puck hound. He does it in all three zones of the ice surface and he has a knack to create positive transitions for his team.
Now, this player needs the full year at the AHL level. He still gets overwhelmed by bigger, stronger players on occasion. The experience and strength gained over the course of a full pro year will help resolve this issue.

Sometimes being a coach’s kid can be a vice, but most times it is a virtue. Michael Kesselring is a coach’s kid and for him, it has been a virtue. Drafted by the Oilers in the sixth round of the 2018 draft, the 6’6, 220-lb right shot defenseman has continued to develop each year of his pro career. Coming into this season he was slotted behind Vincent Desharnais and close to Phil Kemp on the depth chart. Through a combination of bad fortune for Desharnais and hard work by Kesselring, he has become the top pairing RHD in Bakersfield.
What has specifically improved this year? First, he is on the scoring heater of all scoring heaters. He is second for most goals by a defenceman in the AHL with eight to date. He is also averaging a half a point per game for a Bakersfield team that is 26th of 32 teams in goals for. Now, this isn’t coming magically to him. His shot volume has increased dramatically. He’s first among AHL defencemen and eighth overall in shots averaging 3.5 shots per game. He is scoring with both wrist shots and slapshots, and is doing it from distance.  Look at these clips.
The other notable improvement this year is Kesselring’s defensive play. I would suspect that one of the takeaways for him in the off-season was to be harder to play against.  If that was a goal he was given, he certainly took it to heart. This year he is using both his reach and his body to be very effective defensively and has gotten very physical.
The last aspect of Kesselring I want to touch on is his skating. The worry with big defenceman is their ability to skate. This can be straight-line speed or, more likely lateral mobility. The longer the limbs, the more coordination is required.  Kesselring’s straight-line speed is not an issue.
I think the key with Kesselring here is that he gathers himself quickly when setting off skating. The strides are not super explosive, but they don’t have to be given his length. The key is to get the legs moving quickly, which he does.
For me, though, what is exciting is this player’s lateral mobility.
Now does this mean if NHL-caliber forwards attack him wide, he will be able to defend that well? Not yet. That will be the key next step for him. How does he manage attacking players who put the puck into the triangle between his stick and skates at speed? Will his footwork be clean enough to defend that without loss of position or balance? It’s early, but the future looks promising.

The other Condor I wanted to give a quick nod to is Tyler Tullio. Before I begin this review, context is very important. Thanks to the decade of darkness, Oiler fans have seen a multitude of high first and second-round picks taken. These picks, for better or worse, were matriculated to the NHL on very rapid timetables.  That is not normal. Successful teams draft later and their picks take longer to develop as a general rule. Most of what Oiler fans should experience over the coming years (hopefully) is this scenario. We are seeing the green shoots of that now.  Tyler Tullio is an example of this type of development. He’s a fifth-round pick. He has areas to work on. He’s twenty. Be patient.
This player’s first season has been a roller coaster ride playing limited 4th line minutes. Has been healthy scratched, and has zoomed all the way to top-line minutes and first powerplay time. Whatever the rationales for this bumpy ride, there is a player in Tullio.
I believe Tullio’s strongest skill set is his motor. I’ve said a few times that if Tullio makes it, his jersey will be very popular with Oiler fans. He’s an absolute pain in the ass to play against and he never stops competing. Take a look at this clip below. This came right after the Condors were scored on to go down 2-0. The entire atmosphere in the building was deflated, but this twenty-year-old kid comes on the ice and takes charge.
Now that doesn’t mean Tullio is without skill. After all, he averaged far more than a point per game in the OHL in his three years there.  Year to date he has 4-3-7 in 20 games, which is not an eye-raising total, but his play is coming. He has 3 points in his last six games and he is second among Condors forwards in shots. His puck skills are excellent.
And for a smaller-stature player, he has a heavy shot and it seems to continuously catch goalies off guard.
One last theme with Tullio: skating. You’ll all become sick of me talking about this, but the bottom line is if you cannot get to the puck, you cannot play in the NHL. Part of the reason that Tullio fell to the fifth round was the combination of his size with boots that were considered slower.  Clearly, Tullio has done some work because there is a noticeable improvement. Watch this clip here. He has a nice wide stance for balance (and he does get knocked a bit, but recovers well). His skates return to the start position for the next stride quite quickly. His upper body is very compact and quiet. All good for maximizing skating energy. Now, the heel kick is still a little high and you’d like that stride a bit longer, but all in all, this is not a player that will have skating issues.

The last prospect I want to cover in the premiere edition is Reid Schaefer. Schaefer is the 6’4″, 220-lb eighteen-year-old first-round pick from 2022.  Those who follow me know I had concerns about this pick at first glance. The primary concern was that Schaefer had really never scored at any level before about halfway through his draft year season. The concern being did he catch lightning in a bottle? Well, Reid would like me to shut my mouth.
In his first 22 games this year he is 15-12-27 and is averaging more than four shots per game.  More important is that ten of the fifteen goals are at even strength with only two on the power play, one short-handed and two empty goals. Most important is the way he is scoring. This is not a man in a boys league using his body to just bully his way to the net. He scores from distance with an absolutely wicked release.
That doesn’t mean he will not go to the net. He does it routinely, but it is his hands that make the difference down low not his physical presence.
At this juncture, it is safe to say that Reid Schaefer has the ability to score and that he didn’t just catch lightning in a bottle.  His next progression will be to score with this release against pro goalies.
The other part of his game that raised concerns is his lack of lateral mobility. It’s tough to see improvement in a big man on something like this in a few months. It still remains a concern and it is something we will revisit a few times this year to see if we can pick up improvements. Here is one example where we see this lack of lateral ability. Instead, he enters straight ahead. While it is successful, pro defenders will shut this down. He needs to improve his east-west skating dynamics to give defenders something to think about and allow him to create angles of attack on defenders as they move to adjust.
Well folks, if you stayed awake to the end. Kudos! And thank you. Looking forward to this weekly opportunity to share thoughts on Oilers prospects.  See you at the rink.
Featured
Nation Takes
Oilers Talk
Recent articles from Bruce Curlock