The Sked Ahead: Oilers will be tested with busy month of November 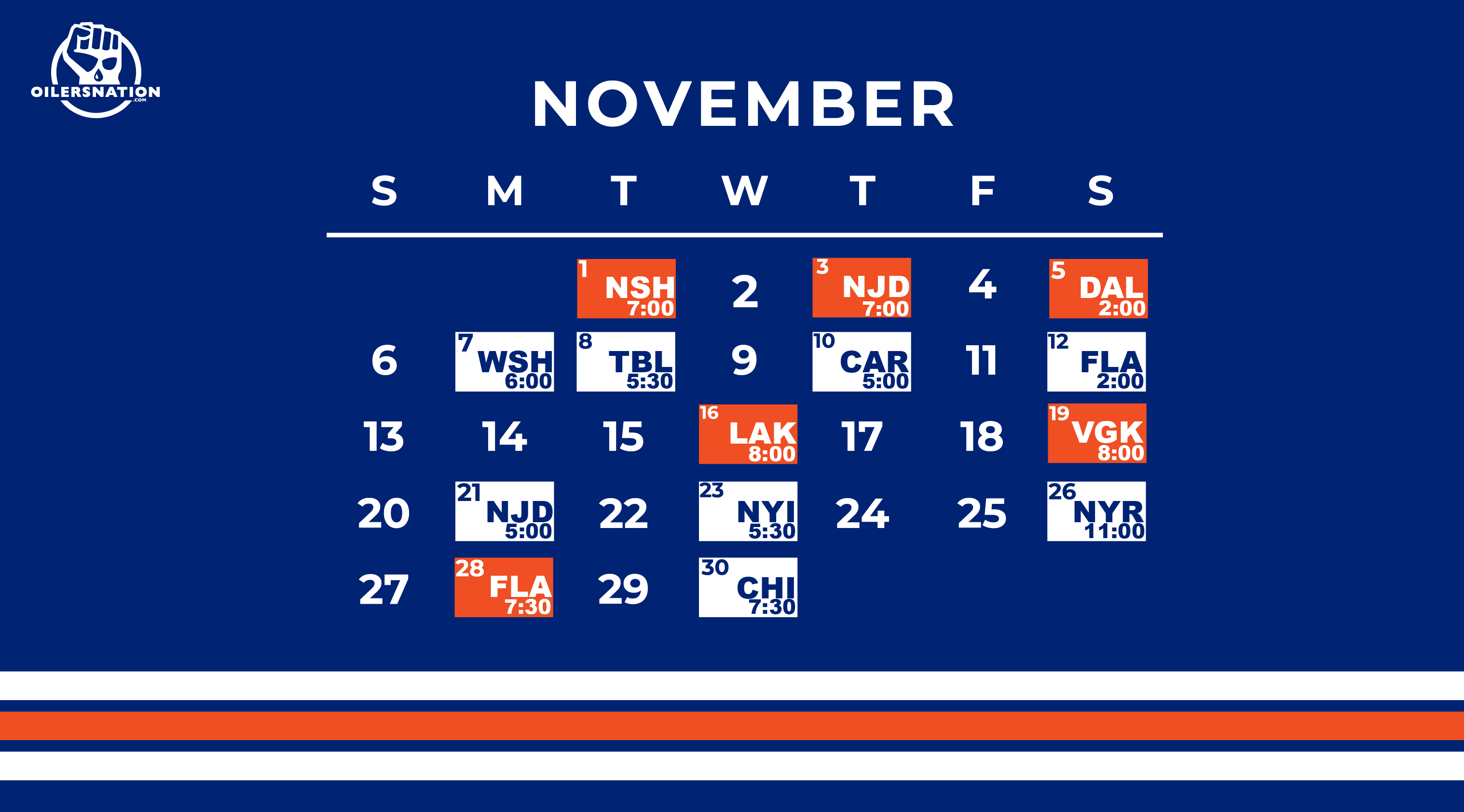 By Cam Lewis
21 days ago
Welcome to November!
The Edmonton Oilers kicked off their season with an up-and-down six-game homestand in which they went 3-3. They then found their groove sweeping a three-game road trip through St. Louis, Chicago, and Calgary, and ultimately went 6-3-0 in October.
Next up, they’ll be tested during a very busy month of November that features two different swings out east and 14 games in 30 days all told. Here’s how it shakes out…
Things kick off on Tuesday night when the Oilers host the Predators, who have gone 1-5-1 since winning their first two games of the season in Europe. The Devils, who are off to a strong 6-3-0 start will come to Edmonton on Thursday and the Oilers and Stars will play a matinee on Saturday. These are three teams with playoff aspirations but I wouldn’t call any of them serious contenders.
The Oilers will then hit the road to play four of the best teams in the Eastern Conference. The trip will start with a back-to-back against the Capitals and Lightning on the Monday and Tuesday and then the Oilers will travel to Carolina and Florida for Thursday and Saturday games. That’s four games against playoff teams over a span of six days, easily Edmonton’s toughest trip of the season.
Following that trip, the Oilers will get their first look at a pair of Pacific Division opponents when the Golden Knights and Kings come to town. They’ll have a bit of time to recharge here, as they get three days off following the eastern swing before facing L.A. and then two more days off before playing Vegas. These are important head-to-head games for seeding purposes when the playoffs roll around.
Immediately after the Vegas game, the Oilers will hit the road to play the New York teams. They’ll start with the Devils, then it’ll be the Islanders two nights later, and the trip will finish with a matinee game with the Rangers at Madison Square Garden. It’ll be interesting to see if the Devils are still looking like a playoff team by then. The same goes for the Rangers, who are off to a slow-ish start at 5-3-2 after reaching the Eastern Conference Final last year.
The Oilers will have one day off between their game against the Rangers in New York and their next game at home against the Panthers. They’ll then hit the road for a quick back-to-back against the Blackhawks and Wild, with the latter game kicking off the month of December. There ain’t much time for rest in November!
That’s six home games and eight road games in the span of 30 nights against opponents that range from legitimate Stanley Cup contenders to teams with reasonable playoff aspirations. The Oilers did very well on their first road trip of the season but these two trips, especially the first one, represent significant tests for the team.
I’d be happy with seven wins and seven losses with some Bettman points mixed in to mitigate the losses. What say you, Nation?
Featured
Oilers Talk
Recent articles from Cam Lewis