The streak of Edmonton Oilers at the Memorial Cup continues 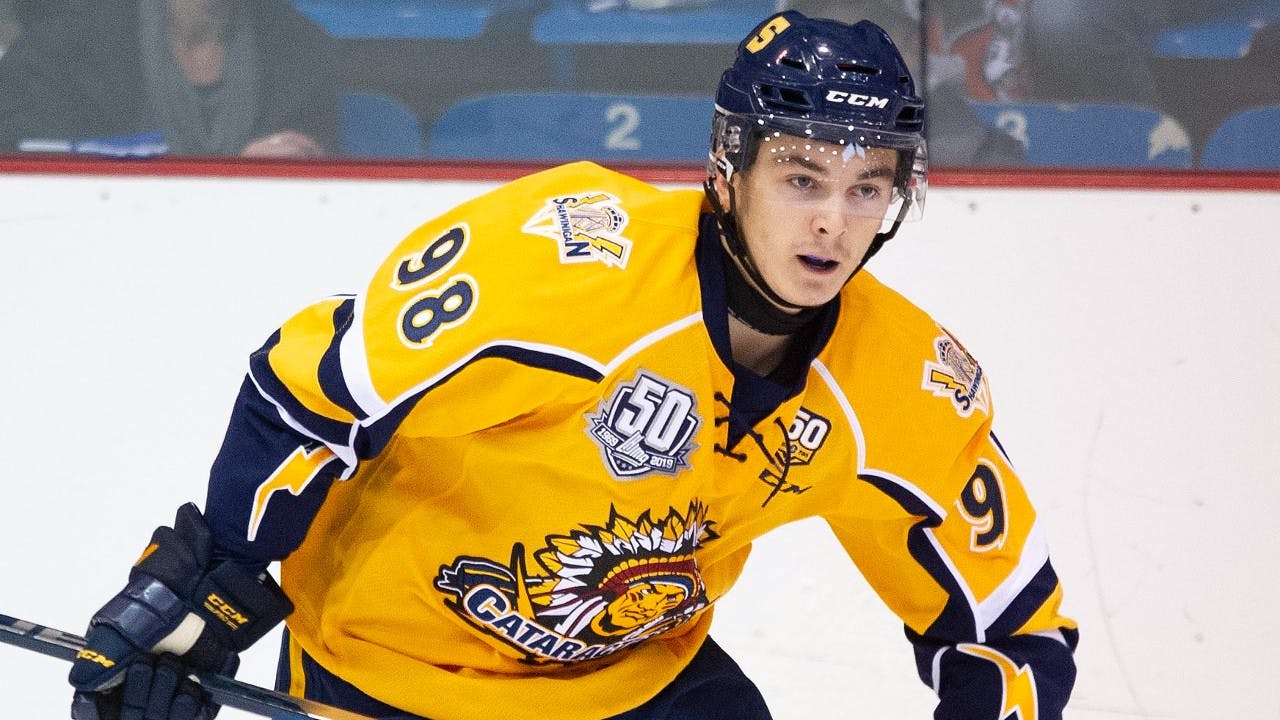 By Liam Horrobin
7 months ago
A great opportunity for Xavier Bourgault lies ahead as he and his Shawinigan Cataractes teammates travel to Saint John’s, New Brunswick, for the first Memorial Cup in three years.
Bourgault had a fantastic season with Shawinigan even after missing a large chunk of the year due to injury. The Oilers 2021 first-rounder scored 36 goals and 75 points in 43 games during the regular season and followed up with 12 goals and 22 points in the playoffs. Only Maverik Bourque scored more points than him.
This year, the Shawinigan forward is the Oilers’ lone representative heading to the Memorial Cup extending the streak of former/current Oilers at the tournament. The last time an Oiler wasn’t there was back in 2011 in Mississauga, Ontario when Jonathan Huberdeau and the Saint John’s Sea Dogs lifted the trophy.
The streak began where Bourgault plays now, Shawinigan, when they played host to the Edmonton Oil Kings, Saint John’s Sea Dogs and London Knights. And that is where we will begin our trip down memory lane.

During this era, it felt as though the Oilers didn’t send scouts outside of the city and just had them watch Oil Kings games. Seven members of the 2012 Edmonton Oil Kings played within the Oilers organization.
Three of them we will talk about shortly but as for the other four they all took different career paths. Martin Gernat and Travis Ewanyk never dressed in an NHL game and now play in Europe. Keegan Lowe played two games for the Oilers in 2018 and, if my memory serves me correct, did a good job. He captained the Bakersfield Condors for two seasons and now played in Italy for the HC Bolzano. The best player from that group was Laurent Brossoit. The Oilers never drafted him but acquired him from the Calgary Flames in the Ladislav Said trade. He played 21 games for the Oilers and is now with the Vegas Golden Knights with 106 career NHL games played.
Griffith also played in the 2012 Memorial Cup losing in the final to the Shawinigan Cataractes in overtime.

Ty “The Answer” Rattie made it to the Memorial Cup with the Portland Winterhawks after beating the Oil Kings in six games. Rattie had a phenomenal playoff with Portland leading the WHL with 20 goals and 36 points in 21 games. He transferred that play to Saskatoon for the Memorial Cup too. Rattie scored six goals and 12 points that year finishing second in the tournament scoring race, behind Nathan MacKinnon. Portland fell short that year; however, losing 6-4 to Halifax.
The London Knights made their back to the Memorial Cup for the second straight year. Griffith was still on the team but they weren’t able to get back to the final. They lost 2-1 to Portland in the semi-finals. Rattie scored the game-winner.

The Memorial Cup made its way back to Western Canada in 2014 for the first time since 2007 when Vancouver beat Medicine Hat 3-1. The Edmonton Oil Kings were crowned champions after defeating the Guelph Storm 6-3 in the final.
Three players from the Oil Kings team would go on the play within the Oilers organization. The first and likely most known is Griffin Reinhart. Reinhart was famously acquired for the 16th and 33rd overall picks in 2015. The 16th overall pick turned in Mathew Barzal. Reinhart never came close to becoming the player Barzal is today and recently retired from pro hockey after spending last season with the Belfast Giants.
While his career with Edmonton didn’t pan out playing only 30 games (one playoff game), as an Oil King he became one of their greatest players. He was the captain of the team that won the Memorial Cup and finished his junior career with 30 goals and 111 points in 209 games. He also played in 57 WHL playoff games and nine Memorial Cup games.
Also on that team were Mitch Moroz and Henrik Samuelsson who were traded for one another in 2017. Neither player played for the Oilers.

2015 was an interesting year for Leon Draisaitl. Now he’s a top-five player in the NHL but back then he struggled to find his footing in the league. The 3rd overall pick from the 2015 draft made the Oilers roster out of the camp but scored only twice in 37 games. Upper management sent him back to junior later on in the year which was baffling after they refused to let him play for Germany at the World Juniors that Christmas.
Draisaitl was traded from the Prince Albert Raiders, who had a 31-37-4 record, to the Kelowna Rockets. Kelowna’s team was loaded already with the likes of Josh Morrisey, Dillion Dube and Madison Bowey on the team. The Rockets finished with a 53-13-3 record in the regular season and soon became WHL champions after beating Brandon Wheat Kings in four games. Draisaitl had 10 goals and 28 points in 19 playoff games. In the Memorial Cup, the Rockets came so close but fell in overtime to the Oshawa Generals. Anthony Cirelli scored the game-winner early in the extra period.

Red Deer, Alberta, held the 98th Memorial Cup back in 2016. The London Knights (OHL), Brandon Wheat Kings (WHL), and Rouyn-Noranda Huskies (QMJHL) made their way to Red Deer that year. On that London Knights team was Edmonton Oilers 2018 first round pick Evan Bouchard.
Bouchard was a rookie in 2016 and played 42 games throughout the regular season. He dressed in 10 games during the Knights’ playoff run. London lost two games in the postseason and both came in the first round versus Owen Sound. They then swept Kitchener, Erie, and Niagara.
They didn’t lose a game at the Memorial Cup either, going a perfect 5-0 and beating Rouyn-Noranda in overtime. Matthew Tkachuk scored the game-winner. Bouchard didn’t play a game in the Memorial Cup.

The Erie Otters made it back to the Memorial Cup in 2017 for the first time since 2002. Of course, we all know that Connor McDavid was an Otter during his junior games but in 2017 he was a member of the Edmonton Oilers. It was Warren Foegele who played for Erie that season. Playoff Foegele was in full swing that year scoring 13 goals in 22 games which was tied for third on the team with Alex DeBrincat. Foegele was named the OHL Playoff MVP after his performances throughout. He kept it going in the Memorial Cup too with two goals and seven points. One of those goals came in the final against the Windsor Spitfires, who were coached by former Oiler Rocky Thompson. Erie fell short 4-3 to Windsor that year.
Ironically, the other Oilers alumni representing the copper and blue that year was Ethan Bear. Bear was playing for the Seattle Thunderbirds, the WHL Champions. Bear was held pointless and the Thunderbirds were winless in their first trip to the Memorial Cup since 1992.

Stuart Skinner played in the 2018 Memorial Cup with the Swift Current Broncos. The Broncos had a historic season winning their first Western Hockey League championship since 1993.
Skinner was acquired from the Lethbridge Hurricanes midway through the season and in 25 games for the Broncos had a 2.68 goals against average along with a 0.914 save percentage. In the playoffs, the Oilers 3rd round from 2017 had six shutouts in 26 games and was named the with his sixth coming in the series-clinching game. The Memorial Cup proved to be a different beast for Swift Current finishing last with a 0-2-1 record. Skinner played in all three games.
Manny Viveiros was the head coach of the Broncos that year. The next season, he joined the Edmonton Oilers as a new assistant coach under Todd McLellan. Viveiros is now the head coach of the Henderson Silver Knights of the American Hockey League.

Three promising Oilers prospects represented the organization in the 101st Memorial Cup in Halifax, Nova Scotia, which was the last time the tournament was held. Raphael Lavoie and Ostap Safin played for the host team the Halifax Moosehead while Dmitri Samorukov played for the Guelph Storm, the OHL champions.
Lavoie had a good tournament for the hosts scoring twice in four games including one in the final versus the Rouyn-Noranda Huskies. That goal gave Halifax a 2-0 lead early in the second period; however, they weren’t able to hold on and lost 4-2.
Safin was pointless in four games and Samorukov had one point for the Storm, who were eliminated by the Huskies in the semi-finals.
That’ll do it for our trip down memory lane.
Hopefully, Bourgault can endure the same success many of the Oilers have before him and help bring the Memorial Cup back to Shawinigan.
We’ll be rooting him on from Oil Country when it gets started on Monday in Saint John.
Uncategorized
Recent articles from Liam Horrobin