By Cam Lewis
3 months ago
34 years ago today, the Edmonton Oilers shocked the hockey world with “The Trade.”
Wayne Gretzky, the greatest player ever to play the game, was dealt to the Los Angeles Kings along with Marty McSorley and Mike Krushelnyski in exchange for Jimmy Carson, Martin Gelinas, three first-round draft picks, and a whole bunch of cash.
What became of all of those players and picks that were sent back to Edmonton for Gretzky? Let’s go through The Trade Tree for “The Trade” and see how far it stretches…

Carson was the big name coming back to Edmonton in the Gretzky trade as the No. 2 overall pick from the 1986 NHL Draft was coming off of a 107-point season with the Kings as a 19-year-old. In his first season with the Oilers in 1988-89, Carson scored 49 goals and 51 assists over 80 regular-season games but added just three points in seven playoff games.
Carson asked for a trade out of Edmonton in November of 1989, claiming later that being one of the players that came back for Gretzky put too much pressure on him…

“When I went to Edmonton I made it clear I didn’t want to play there. It was the negative feelings of the Wayne Gretzky departure that did it. The whole Gretzky syndrome. We’re talking about a legend, possibly the greatest player in the game. We would lose three games and everyone would start to analyze the whole trade over again.”

The Oilers dealt him to his hometown Detroit Red Wings, and coming back in the trade were Adam Graves, Petr Klima, Joe Murphy, and Jeff Sharples.
This was a big trade for the Oilers. Murphy and Graves formed the team’s “Kid Line” along with Gelinas and played a key role in Edmonton winning the 1990 Stanley Cup, their first and only without Gretzky, while Klima also scored a game-winning goal in triple overtime for the Oilers in the Stanley Cup Final that year.
Three of the players involved here have their part of the trade tree end pretty quickly while one stretches on for quite some time.
Graves left the Oilers as a free agent to sign with the New York Rangers ahead of the 1991-92 season. He was a part of the Rangers team that won the Stanley Cup in 1994 with multiple former Oilers, including Mark Messier and Kevin Lowe.
Klima was moved to the Tampa Bay Lightning in 1993 for future considerations, which wound up being nothing, and Sharples was dealt ahead of the 1990 trade deadline for Reijo Rustolainen, who helped the Oilers win the Stanley Cup that year and then left to play in Europe.
The Murphy part of the trade tree is where things really start to get interesting. He was moved in 1993 to the Chicago Blackhawks for Dean McAmmond and Igor Kravchuk, who were both quality players for the Oilers during the mid-1990s.
We’ll start with McAmmond. He scored 161 points over 303 games for the Oilers and was traded in 1999 back to the Blackhawks for Ethan Moreau, Christian Laflamme, Chad Kilger, and Daniel Cleary.
Moreau played 653 games for the Oilers over 11 seasons and served as their captain from 2007 to 2010 and left the team as a free agent. Cleary played 220 games for the Oilers before leaving the team as a free agent. He would wind up having a successful career as a bottom-six forward with the Red Wings.
Kilger played 87 games with the Oilers and got flipped in 2000 to the Montreal Canadiens for Sergei Zholtok, who was flipped a year later to the Minnesota Wild for a seventh-round draft pick that was used on Jean-Francois Dufort, who never signed.
Laflamme played only 51 games for the Oilers before getting dealt to the Habs in 2000 for Igor Ulanov and Alain Nasreddine. Both players left Edmonton as free agents but Ulanov came back for a second stint with the team in 2004.
Now let’s circle back to Kravchuk, the other player in the Murphy trade. Kravchuk was traded to the St. Louis Blues in 1996 for Donald Dufresne and Jeff Norton. Dufresne played a few games for the Oilers and then retired while Norton was moved to the Lightning for Drew Bannister and a sixth-round pick, which was used on Peter Sarno.
Sarno was traded to the Vancouver Canucks in 2004 for goaltender Tyler Moss, who left for Europe shortly after. Bannister was traded to the Anaheim Mighty Ducks for Bobby Dollas who was dealt to the Pittsburgh Penguins for Josef Beranek who was moved back to the Penguins for German Titov who left as a free agent.
So, all told, the Jimmy Carson part of the Gretzky trade played a significant role in the team’s 1990 Stanley Cup while also stretching all the way to the 2009-10 season with Ethan Moreau.

Gelinas was Los Angeles’ first-round pick at No. 7 overall at the 1988 NHL Draft just a few months earlier. Coming off of a 131-point season in the QMJHL, there was plenty of hype surrounding Gelinas as a prospect.
As previously mentioned, Gelinas played a key role on Edmonton’s 1990 Stanley Cup squad on the “Kid Line” that helped provide depth scoring in the playoffs. Gelinas would score 60 goals and 120 points over 258 games for the Oilers.
In 1993, the Oilers traded Gelinas to the Quebec Nordiques, who had taken quite a bit of criticism for passing him over with the No. 5 overall pick in the 1988 NHL Draft. Coming back to Edmonton was Scott Pearson, who was flipped a couple of years later to the Buffalo Sabres for Ken Sutton.
Gelinas’ part of the trade tree syncs up with Carson’s part of the trade tree here, as Sutton was traded alongside Igor Kravchuk in that aforementioned deal that brought Donald Dufresne and Jeff Norton to Edmonton. This ultimately comes to an end in 2000 with Titov leaving as a free agent.

The Oilers didn’t use their pick from Los Angeles in the 1989 NHL Draft and instead traded it to the New Jersey Devils for defenceman Corey Foster. Jason Miller, who New Jersey selected with that pick at No. 18 overall, played just six games in the NHL.
Foster, meanwhile, was packaged as part of a blockbuster trade that sent Jari Kurri and Dave Brown to the Philadelphia Flyers for Craig Berube, Craig Fisher, and Scott Mellanby. Fisher was traded a couple of years later to the Winnipeg Jets for cash while Mellanby was taken by the Florida Panthers in the expansion draft.
Berube’s part of the trade tree stretches for a while as he was moved shortly after in another blockbuster deal to the Toronto Maple Leafs, along with Grant Fuhr and Glenn Anderson, for Vincent Damphousse, Peter Ing, Scott Thornton, and Luke Richardson.
Ing was traded to the Red Wings for a seventh-round pick who never played in the NHL and Richardson played six seasons with the Oilers before leaving as a free agent. Thornton was traded to the Habs in 1996 for Andrei Kovalenko, and then Kovalenko was flipped three years later for Alexandre Daigle. Daigle was traded shortly after that to the Tampa Bay Lightning for Alexander Selivanov, who left as a free agent.
The interesting part of the Leafs trade with Damphousse, the No. 6 overall pick from the 1986 NHL Draft. Damphousse scored 89 points with the Oilers in 1991-92 and then got traded to Montreal, where he’d help the team win the 1993 Stanley Cup, in exchange for Shayne Corson, Brent Gilchrist, and Vladimir Vujtek.
Gilchrist was traded to the Minnesota North Stars for Todd Elik, who was lost to waivers, and Vujtek was traded to the Lightning for Brantt Myhres, who was traded to the Flyers a year later for Jason Bowen, who left for Europe.

Corson played three seasons with the Oilers and was named captain in 1994-95, but had his captaincy stripped by then-head coach George Burnett. The Blues signed Corson as a free agent in the off-season and the Oilers received two first-round picks as compensation, and they wound up flipping those two picks back to St. Louis for Curtis Joseph and Mike Grier.
Interestingly enough, one pick was used by the Blues on Marty Reasoner, who would end up getting traded to Edmonton as part of the package that sent star forward Doug Weight to St. Louis, and the other pick was part package the Blues sent to Los Angeles to acquire Wayne Gretzky in 1996.
CuJo was an excellent goalie in Edmonton for a few seasons before he left to sign in Toronto as a free agent. Grier also became a fan favourite with the Oilers but wound up getting traded to the Washington Capitals in 2002 for two draft picks.
One of those picks was used on Zack Stortini, who played 256 games with the Oilers before leaving as a free agent, and the other pick was traded to the New York Islanders along with Janne Niinimaa for Brad Isbister and Raffi Torres.
This trade was important to Edmonton’s run to the Stanley Cup Final in 2006. Torres, of course, was a key forward on that team who could score goals and throw crushing hits, while Isbister was traded for a draft pick that the Oilers would flip to acquire Yan Stastny, who they moved at the trade deadline to acquire Sergei Samsonov.
Torres was traded in 2008 to the Columbus Blue Jackets for Gilbert Brule, a former top draft pick who was struggling to find his game at the NHL level. Brule was selected off of waivers by the Arizona Coyotes in 2012, making him Edmonton’s last connection to the Gretzky trade.

Edmonton used the first-round pick from Los Angeles in 1991 to select Martin Rucinsky, a winger out of the Czech Republic. Rucinsky only played in the organization for a few months as he was moved in 1992 to the Nordiques for Ron Tugnutt and Brad Zavisha.
Tugnutt played 29 games for the Oilers and got claimed by the Mighty Ducks in the expansion draft. Zavisha was traded in 1995 to the Flyers for Brad McGill, who played eight games with the Oilers before retiring.
The puzzling thing here was Edmonton’s willingness to move Rucinsky so quickly. He played just two games for the Oilers and went on to score 612 points over a 961-game NHL career. 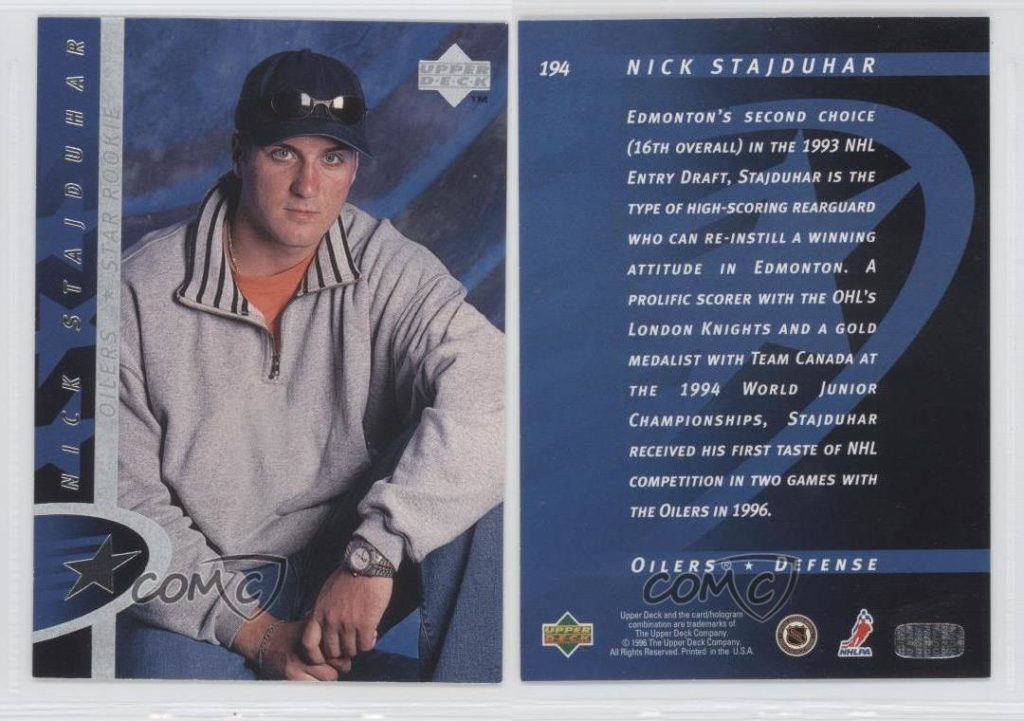 Finally, we have Los Angeles’ first-round pick in the 1993 NHL Draft, which the Oilers used on Nick Stajduhar, a big defenceman who was coming off of a season in which he scored 61 points in 49 games for the London Knights.
A couple of years later, Stajduhar’s career was derailed after being sucker punched in a bar room fight that left him severely concussed. He would wind up playing just two games in the NHL and retired in 2001, an unfortunate end for a player with a tremendous amount of talent.
Oilers Talk
Recent articles from Cam Lewis