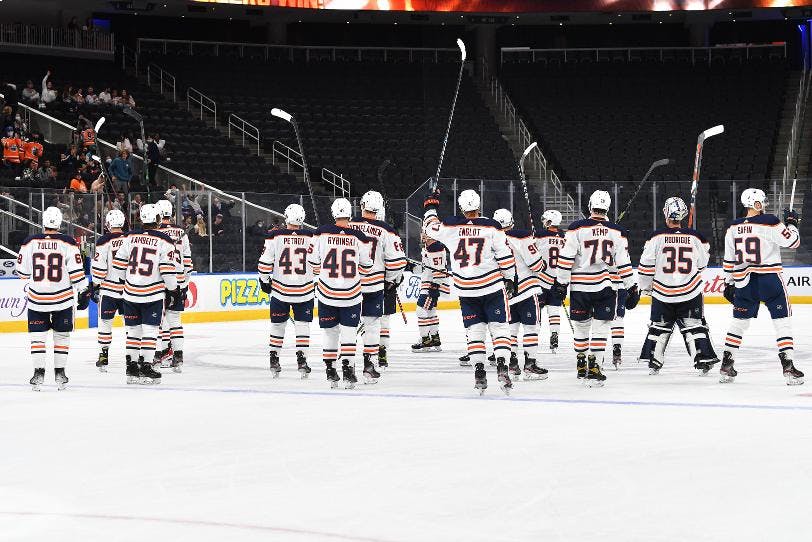 By Zach Laing
1 year ago
Rookie camp has all it wrapped up for the Edmonton Oilers and a select number of players will be invited to main camp which kicks off Wednesday.
The Oilers rookies fell last night to the Flames rookies as the teams split the two games.
Here’s three things to note:
1. The Dmitri Samorukov injury is disappointing and couldn’t of come at a worse time for the player. He was likely to join the camp and compete for a depth defensive position. Now with him set to miss six-weeks due to a broken jaw, he’s going to be well behind the eight-ball on other young defenceman, like Phillip Broberg. Phil Kemp has impressed early in camp, too, looking like a veteran amongst rookies.
2. The goalie battle. Olivier Rodrigue stole the show in game one after an rocky start to the game, while Ilya Konovalov led the charge in a quieter game two. He kept the Oilers in a tight match and impressed Jay Woodcroft. As I’ve said before, he’s a player that could surprise in main camp. Here’s what Woodcroft had to say:
“I thought Ilya gave us a chance to win the game,” he said. “It was a 2-1 hockey game. They scored a couple of empty-net goals, but we were right there. We certainly weren’t perfect. I thought we were the better team in the first period drawing some penalties and scoring a power-play goal. I thought they were the better team in the second period, and we did some better things in the third. We came up short today, but it’s not from a lack of effort or a lack of try on anybody’s part. Ilya did give us a chance to win the game, especially in the second period.”
3. With Dylan Holloway out due to his wrist injury, Raphael Lavoie has popped. He scored the opening goal last night and has been progressing very well. In fact, his development is exactly what you want to see from a young prospect. Ever since he was drafted he’s been on a linear progression line upwards — that bodes well for the Oilers, who are in need of a forward with his blend of size, skill and tenacity. He’ll be a player down the road. Fellow QMJHL’er and 2021 first-round pick Xavier Bourgault had a good camp too and had a nifty feed for Lavoie’s opening goal. I’m excited to follow his play in the QMJHL with the Shawinigan Cataractes.
Zach Laing is the Nation Network’s news director and senior columnist. He can be followed on Twitter at @zjlaing, or reached by email at zach@oilersnation.com.
Nation Takes
News
Oilers Talk
Recent articles from Zach Laing