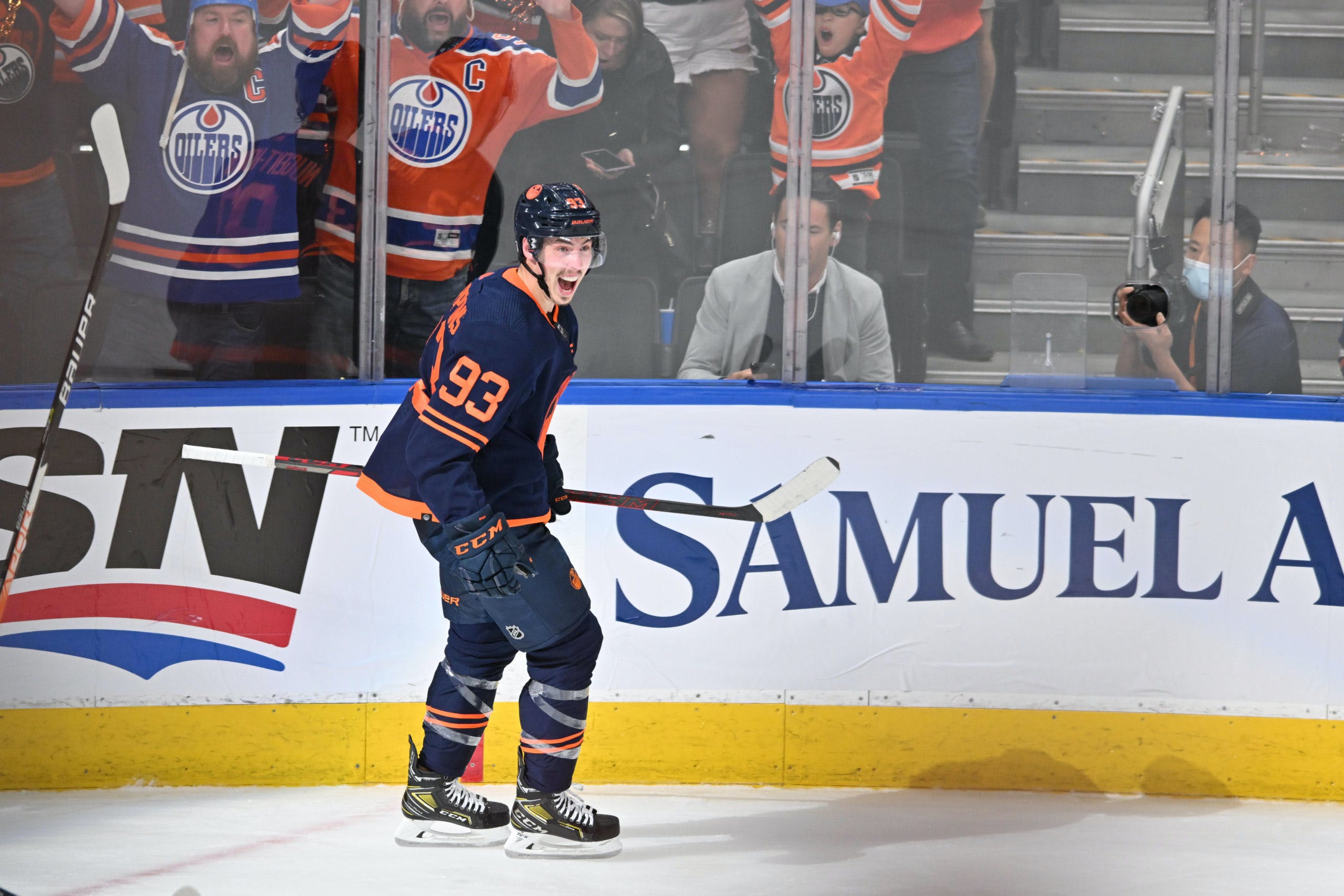 By Tyler Yaremchuk
1 month ago
The Oilers finished up their October schedule with a victory over the Calgary Flames on Saturday night. They’re 6-3-0, sit second in the Pacific Division, and have the seventh-highest points percentage in the entire NHL. It’s been a good first month for the Oilers, even if some tough moments were mixed in throughout their first nine games.
With tonight being Halloween night, I took some time on Oilersnation Everyday to look at the start of the season for not just the Oilers, but the entire NHL.
For the Oilers, has anyone been a bigger treat than Ryan Nugent-Hopkins? With five goals and six assists through eleven games, The Nuge seems primed for a career year and after a tough 2021-22 campaign that saw him post just 22 even-strength points in 60 games played, it has been very sweet to see him get off to the start that he has.
One big reason why I believe that this early-season heater isn’t a trick is that while yes, he’s scoring a lot to begin the year, he’s also getting a crazy amount of good looks at 5v5. It’s not like he’s just scoring on every chance he gets. His 12.76 individual scoring chances/60 at 5v5 not only leads the team but ranks him 14th in the NHL among players with at least 100 minutes.
Look at the game against Calgary. He had two great chances that Markstrom stopped and he rang one off the post. He’s not just scoring goals, he’s generating chances and that’s a very encouraging sign.
Right now, he’s on pace for 45 goals and 55 assists. He isn’t going to finish the year with those kinds of numbers, but I believe this could end up being a 30-goal campaign for Nugent-Hopkins and I wouldn’t be the least bit surprised if he ended up hitting the 70-point mark for the first time in his career.
The team seems to now view him as a top-six winger, which is where he should be playing, and he’s locked into a regular spot on one of the best powerplay units in the league. His shooting percentage will eventually come down a little bit and he will go through a cold streak at some point, but this start should propel #93 to a career year.
Nuge has been a treat for the Oilers and the same could be said for the likes of Ryan McLeod and Stuart Skinner. Without the contributions from those three, the Oilers definitely wouldn’t be 6-3 here on Halloween.
Fans are certainly hoping that the .888 save percentage that Jack Campbell has posted through the first month is nothing more than a trick. I don’t think he’s been bad and I actually think my Real Life Podcast co-host Jay Downton put it perfectly today on our show saying “it’s a good .888 save percentage”.
He isn’t giving up weak goals and he has made some good saves, and there have only been two bad games that have cratered his numbers. I’m fully confident that he’ll go on a hot streak at some point but for now, I have no problem saying that Stuart Skinner should be treated as the starter. He’s earned it for the time being. Campbell will grab the job back at some point. 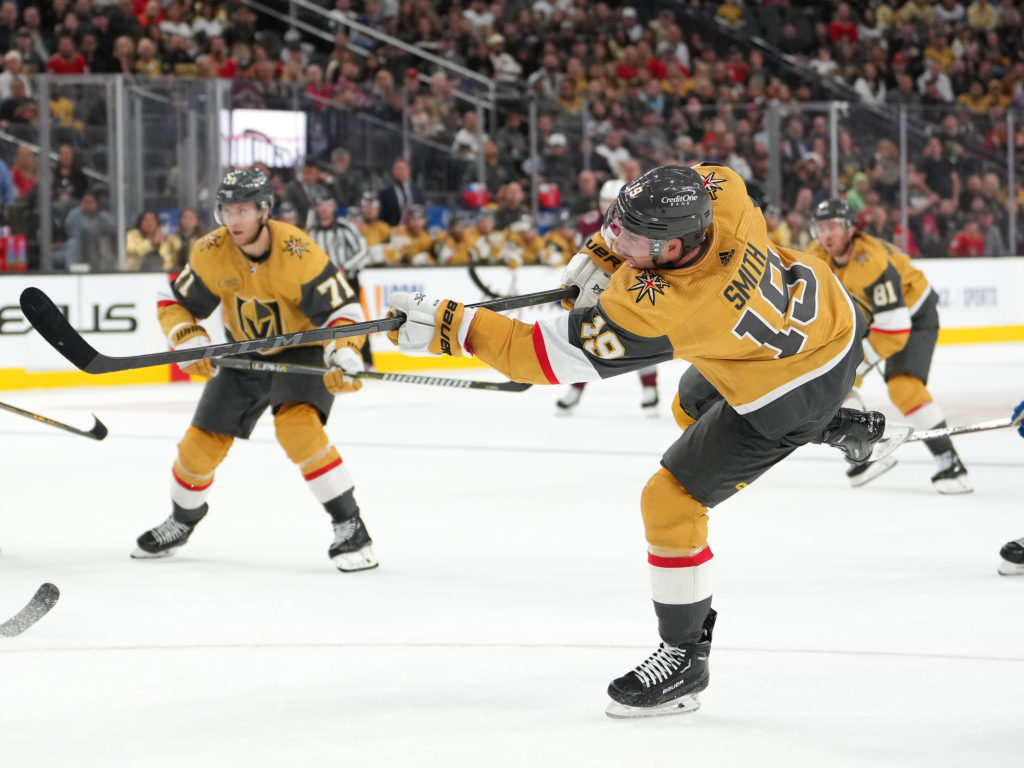 Oct 22, 2022; Las Vegas, Nevada, USA; Vegas Golden Knights right wing Reilly Smith (19) shoots the puck against the Colorado Avalanche during the third period at T-Mobile Arena. Mandatory Credit: Stephen R. Sylvanie-USA TODAY Sports
My biggest treat of a team was actually the Vegas Golden Knights. I picked them to miss the playoffs to start the season and I will admit that they’re proving me wrong. I think eventually their goaltending will slow them down and they won’t contend with Edmonton for the top spot in the division but the rest of that team is good enough and they’ll stay in a playoff spot. Bruce Cassidy has them playing very good hockey and Jack Eichel looks like a star once again.
I would love to give the Boston Bruins credit for their start to the season but if you’re an avid Oilersnation Everday listener you’ll know why I’m not doing that.
My treat of a player was Rasmus Dahlin. I believe he will start being mentioned in the Cale Makar/Roman Josi conversation when the season is done. His career numbers to this point have been very strong, even though we never really talked about him. Heading into this season he had 160 points in 277 career games. That’s an average of 47 points per 82 games. That’s good.
This year I think we’ll see him stay close to his current pace and finish with 70-80 points, solidifying himself as a premier offensive defenseman in the NHL.
My trick of a team was the Philadelphia Flyers. They’re league average or worse in most 5v5 shot metrics and their special teams have been mediocre. They’re simply winning games because Carter Hart is playing at a crazy good level. They’ll fall off eventually and my guess is that when they do, it’ll get ugly.
The team I couldn’t quite decide on was the Winnipeg Jets. They’re off a great start to the season and Connor Hellebucyk has been amazing. On top of having an elite goalie, they have a very strong top-six and their blueline is good enough to get them into the playoffs. Still, I think about all the drama that surrounded them last season, over the summer and into training camp and have this feeling that if things get slightly off the rails there, they might not find their groove again. I want to believe in the talent, but they burned me last season when I predicted that they’d go on a run, so I’m hesitant to say they’re legit.
What say you? Who’s been the biggest treat on the Oilers? And which team or player around the league is pulled the biggest trick through the first month of the season? Let me know in the comments!
Editorials
Featured
Oilers Talk
Recent articles from Tyler Yaremchuk