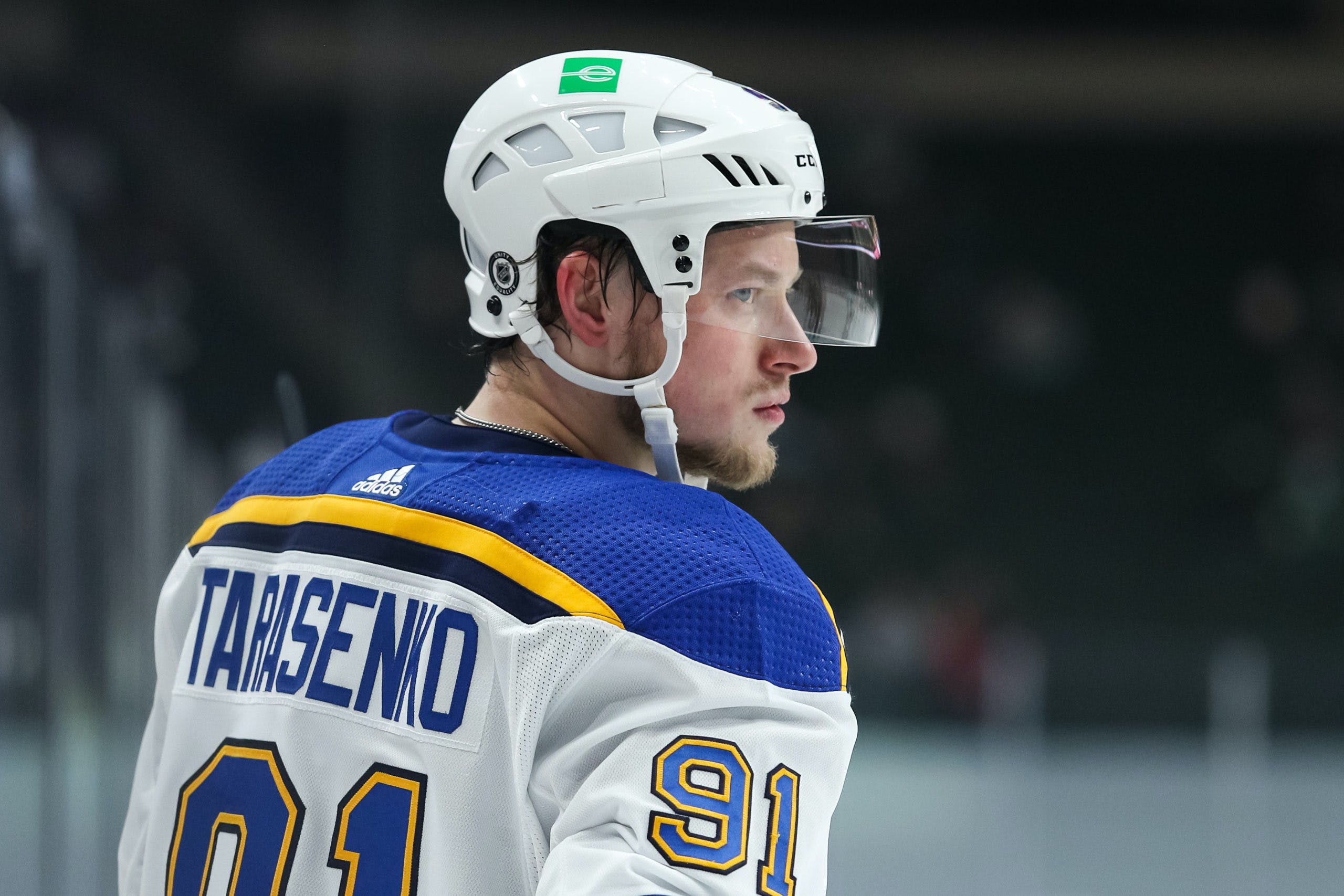 By Zach Laing
1 year ago
A bombshell report dropped in the hockey world last night as one of the games more prolific scorers publically asked for a trade.
According to The Athletic’s Jeremy Rutherford, St. Louis Blues F Vladimir Tarasenko has requested a trade, which comes after Frank Seravalli broke the news that the Russian sniper could be available in a trade just over a week ago at DailyFaceoff.com. In the article, Rutherford noted Tarsenko has submitted a list of up to 10 teams. That hasn’t kept the Blues from getting a headstart, according to Rutherford, who surveyed a handful of NHL GM’s that confirmed Doug Armstrong had been shopping Tarasenko “for a while.”
While the list is believed to include teams like Tampa Bay, Pittsburgh, the Islanders, Vegas, Washington, Montreal, Toronto and Florida, Rutherford speculated if Edmonton is a team he would be willing to waive a no-trade clause for.
“Would he waive his no-trade clause to play in Edmonton with Connor McDavid and company?” questioned Rutherford.
The biggest concern about Tarasenko is his health. He’s had three shoulder surgeries over the last 28 months and over the last two seasons he’s only played in 34 games, albeit scoring seven goals and 24 assists.
After all, this is what Rutherford has reported led to the trade request:

So why does he want out? According to sources familiar with the situation, he is upset with the team’s handling of his shoulder surgeries in 2018 and 2019 — his first two of three such surgeries, which were both performed by Blues physicians — and feels there’s no trust left between him and the organization.
In March, The Athletic wrote about those procedures and a third one, in 2020, which was carried out by non-club doctors at the Steadman Clinic in Edwards, Colo. The ligament damage from the first injury was not corrected in either of the first two operations, sources say, and wasn’t caught until Tarasenko was seen by the doctors at Steadman.
Furthermore, sources say that Tarasenko complained about discomfort in his shoulder before rejoining the Blues for the playoffs in the Edmonton bubble in 2020 and that he believes the club waited too long before doing additional testing.

For the sake of the remainder of this article, let’s assume Tarasenko is fully healthy and returns to the player he was. This may not be the most apparent reality and in my eyes I wouldn’t be trying to acquire Tarasenko unless he is, in fact, fully healthy.
So what would he bring to the Oilers if he were healthy? Scoring and point production have never been a weak spot for the nine-year NHL veteran. He’s consistently been a 60-70 point producer when healthy and has scored 218 goals in 531 NHL games. A powerplay threat, Tarasenko has been a strong shooter there.
Offensively he’s been as strong of a contributor as you could ask for throughout his career. Defensively, he’s seen his struggles. But with this last year and his 24 games as an outlier, Tarasenko has always been above average when accounting for his 5×5 shot, goal and expected goal rates.
Tarasenko holds all his fate in the trade market with his no-trade clause and is owed $7.5-million against the cap this year and next. His salary, however, is $9.5-million in 2021-22 and $5.5-million in 2022-23 before he hits unrestricted free agency.
It’s not often goal scorers of his ilk hit the market, so Edmonton should be checking in with the Blues on this. His ability as a left-shot, right-wing scorer would slot him on the Oilers top-line alongside Connor McDavid.
Could the Oilers actually make it work? That I’m less convinced of. Even through his salary, I don’t know if the Oilers have the assets to make it happen. According to Rutherford, the Blues believed they are still in a championship window making it unlikely they would accept picks or prospects in a deal.
Zach Laing is the Nation Network’s news director and senior columnist. He can be followed on Twitter at @zjlaing, or reached by email at zach@oilersnation.com.
Nation Takes
News
Oilers Talk
Recent articles from Zach Laing