Weekly Rumours – The Eichel Saga Is Over 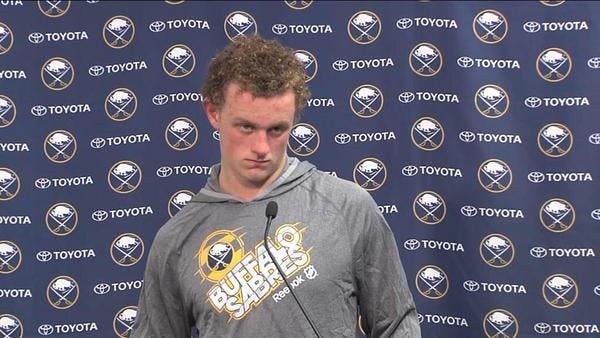 By Tyler Yaremchuk
1 year ago
The Jack Eichel Saga is finally over! The Vegas Golden Knights and Buffalo Sabres made a late-night move sending the injured Eichel along with a third-round pick to Vegas in exchange for Alex Tuch, Peyton Krebs, a top ten protected first-round pick, and a second-round pick.
My first thought was honestly that Buffalo didn’t get a lot back here. Eichel is a legitimate top line centre when he’s healthy and now that he can get the back surgery that he wants, I wouldn’t be surprised if he starts producing like the superstar that many thought he was capable of being when he was taken behind Connor McDavid in 2015. He just needs to get healthy, and that’s never a guarantee.
For Buffalo, you would have to think that they would have been able to get much more in return for Eichel if they would have just let him get the surgery that he wanted to get. A healthy Eichel would have been worth way more than the package that the Sabres ended up getting. They also could have helped their case by retaining some of his $10m cap hit, but that was apparently a non-starter for Sabres GM Kevyn Adams.
Now, yesterday was a wild day rumour wise and Kevin Weekes of ESPN reported that Matt Tkachuk, along with a handful of other assets, was a part of the Flames offer to the Sabres.
Based on what Frank Seravalli has said today on both The DFO Rundown and The Daily Faceoff Show, it doesn’t sound like Tkachuk was ever close to being moved. The Flames offers for Eichel, and it’s pretty well known that they were making an effort to acquire him, were mainly centred around future assets. They wanted to make this year’s team better.
For the Oilers, I think it would have been better to see him go to the Flames. I don’t believe the Flames are one piece away from being a Stanley Cup contender. Eichel would have made them better, but still not better than the Oilers in my opinion. As for Vegas, this move does elevate them in my opinion. A star top-line centre was really the only piece that they were missing and if they can get everyone in their lineup healthy, I think they have close to a perfect roster.
Now, the Golden Knights would also be about $6 million over the cap if everyone was healthy and that’s obviously not allowed. The estimated recovery time for Eichel after his surgery is about three to five months. He’s expected to play for the Golden Knights this season and the Olympics aren’t even out of the conversation for Eichel.
That means the Golden Knights either have to shed salary by making a trade (Reilly Smith and Jonathan Marchessault have been on the block in the past) or this could mean that the team is not as optimistic about the chances of Mark Stone playing in the regular season this year. Either way, Vegas will have to make some big decisions in the coming months as Eichel recovers from surgery.
It’s worth noting that the Hurricanes and Blues were also reportedly interested in Eichel.

During the inbox segment on The Daily Faceoff Show, Frank Seravalli and goaltending guru Mike McKenna got asked about the likelihood of Marc-Andre Fleury getting moved before the NHL trade deadline and if Edmonton could be a potential fit.
I could see the Oilers being interested in adding a goaltender before the trade deadline, even though Mikko Koskinen is playing great right now, and there’s no doubt that Fleury would be at the top of the list in terms of available goaltenders.
McKenna and Seravalli however made it sound like Fleury will only be moved if he wants to. The ball is entirely in his court and the Hawks won’t trade him without his permission. Would Fleury move his family up to Edmonton for just a few months in order to chase another ring? That’s the biggest question.
He also carries a cap hit of $7 million so the Oilers would need the Hawks to not only take Mikko Koskinen back in the deal, but also retain some salary. That would mean that the cost of acquiring Fleury would go way up.
I like the idea of the Oilers bringing in a goaltender, I’m just not sure if Fleury is a realistic target.