Where Are They Now: Zack Stortini By Jason Gregor
9 months ago
Zack Stortini was named captain of the Sudbury Wolves when he was only 17. He wasn’t the Wolves’ best player, but he was an extremely hard worker, who was physical, would protect his teammates and he was a great communicator. His work ethic led to a 14-year career playing pro hockey.
He was drafted 79th overall by the Edmonton Oilers in 2003. His first six seasons he played in the Edmonton Oilers organization. He played a year and a half in the AHL before being recalled and made his NHL debut on January 20th, 2007 v. the Calgary Flames. He scored his first goal and had his first fight in his sixth NHL game v. Vancouver.
Stortini played all but one of his 257 NHL games with the Oilers. He played one game with the Nashville Predators in 2011-12, but he spent the rest of his final eight pro seasons playing in the AHL. He never gave up on the NHL dream, but he became an AHL veteran who played for five NHL organizations with Nashville, Anaheim, Philadelphia, Ottawa and San Jose. Organizations wanted him for his work ethic and character.
In today’s episode of Where Are They Now, I caught up with Stortini. He and his wife Desiree live in Sudbury and are proud parents of young Frank Stortini, who celebrated his first birthday this past week on February 7th.
Gregor: You had a very unique career path. After five seasons in the NHL you played eight more in the AHL. The dream of getting back to the NHL was always there I assume, but you transitioned into an AHL vet to mentor players. Was it difficult accepting that role?
Zack Stortini: I have been very fortunate to have many opportunities and experiences that have shaped who I am today. Like every young player who wants to play in the NHL, I was lucky to be able to do so. Equally rewarding was the journey to get to the best league in the world and then help other young men reach their goal of playing professional hockey at the highest level. I am grateful for the friendships I have been able to make with the incredible people I have worked with throughout my career. It is never easy transitioning to a new role, but having capable mentors who care and are great leaders made the transition more fluid and rewarding.
You signed contracts with Nashville, Anaheim, Philly and Ottawa and then AHL deals with San Jose and Charlotte. Did you have a favourite AHL team you played for? Is so, why?
Stortini: It is unfair to have a favorite AHL team when I appreciate the strengths, values, and the people in each of the organizations where I played. Looking back at my time with each team, I have a wealth of experience learning from each organization’s philosophies, great memories of the people that have helped me and those that I was able to positively influence as well as friendships that I will cherish for the rest of my life. There are so many great stories of incredible people in each of those organizations that I look forward to sharing with the world — people who were great at developing, winning, and valuing other people. 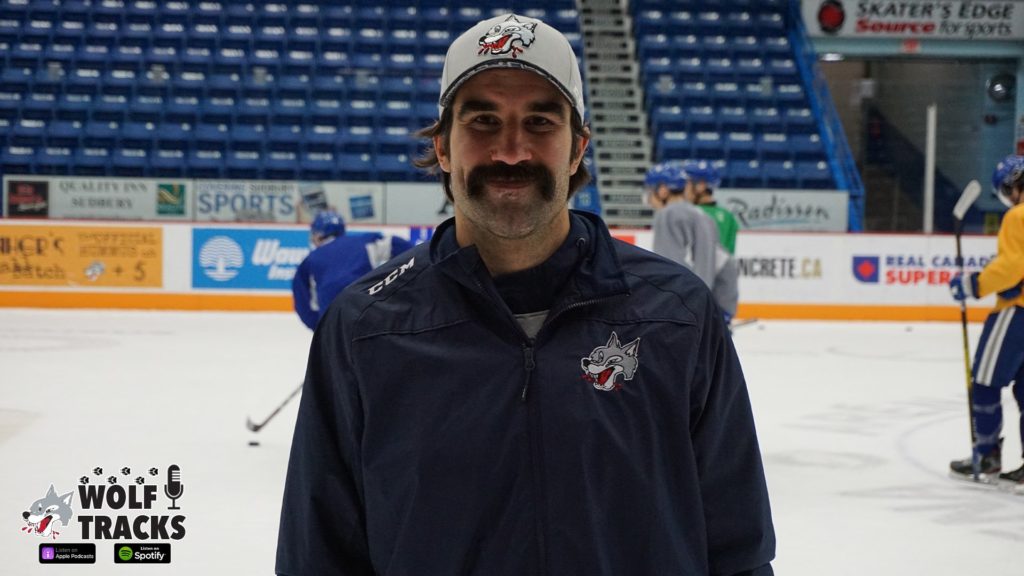 Photo: Sudbury Wolves
When did you get the coaching bug?
Stortini: I first started thinking about transitioning into coaching during my last few years in Charlotte. Coaches Mike Vellucci and Ryan Warsofsky are people who care and want what’s best for their players and team. The many conversations, the time they took to work with me and showing me a path to transition into coaching was not only appreciated but so very valuable. To learn from coaches who do it the right way — leading and caring for people — I have been lucky to have had many great coaches that I played for, but the timing in my career, it was Mike and Ryan who pulled me onto the coaching path. Ultimately winning a Calder Cup with Charlotte while seeing the influence of the coaching staff to instill a winning culture was motivation to want to follow in their footsteps.
What do you like most about coaching in Sudbury?
Stortini: I love working with talented, driven young athletes. Coaching with the Sudbury Wolves has afforded me the opportunity to work with incredible young men who are the best in their age group and want to continue to improve, learn and develop. Working with players at the cusp of being able to receive a return from the game of hockey is both challenging and rewarding. I am lucky to help a team that I once played for and a community I grew up in. Sudbury is an awesome supporter of the game of hockey, and it makes it fun being a part of a source of civic pride!
You were a captain in the OHL at 17. You were always a good leader/motivator to the team. How do you use that skill as a coach?
Stortini: It was an honour to be named captain of the Wolves many years ago. I am grateful to this day for the opportunity to lead teams and was lucky to have the chance to do so from a young age. Being a good leader is a necessary skill as a coach. Being someone who leads through example, holding other people accountable and showing appreciation for every individual’s strengths is something that I pride myself on. Leadership is one of the skills that I continue to work on and improve with the help of many great mentors.
What has been the biggest learning curve as a coach?
Stortini: As a competitive person, I am always looking for ways to improve. As a coach, the focus has shifted from having a more physical element — where I wanted to be the most well conditioned athlete on the team and a leader who could contribute on the ice — to being a leader who is capable of empowering others to learn, develop and be successful. The mentorship I continue to receive makes me better every day, an ethos I share with everyone I work with.
What area do you feel you’ve improved the most as a coach thus far? And what do you want to do better moving forward?
Stortini: As a young coach I feel my ability to relate to today’s athlete, communicate with people and lead with integrity are values that I will continue to build on. I am currently working with a leadership coach on further developing my communication skills and implementing them effectively. Using the soft skills based on the strengths of an individual’s personality, I am finding what I am learning positively improves the relationships that I have with athletes, coaches and everyone I work with.
Do you watch the Edmonton Oilers?
Stortini: I am forever an Oilers fan! Having the privilege of being a part of a great organization who prior to my arrival had enjoyed the ultimate successes of bringing together amazing people and winning championships, I will always be an Edmonton Oilers supporter. I continue to watch and follow the current players and team. They have some of the best players in the world. I’m hoping for them to have more success in the future and I’m and always cheering for their triumphs over adversity.
How many Oilers jerseys did you collect/keep from your time in the organization?
Stortini: I have been very lucky to collect several Oilers jerseys from my time with the team. Among my favorites are the Mark Messier retirement game jersey signed by some of the greatest players to ever play hockey. Another favorite is a team signed jersey. It brings me a lot of happiness to see the names of guys that I had the privilege to play with — people who were awesome teammates and continue to be awesome people and friends.
Favourite memory when you played in Edmonton?
Stortini: Some of my favorite memories would be going to one of our captain’s homes. Ethan Moreau would have all the guys and their families over for dinner and festivities —whether it was Halloween, Thanksgiving, or the Super Bowl — it was always fun. Guys would hangout and play basketball or mini sticks against each other or the young kids of players on the team. Everyone would talk and interact as a big extended family. To be a young man included in an elite group that welcomed not only me, but my wife, to be a part of the Oiler family was something special. We had the privilege to see firsthand what it takes to be successful leaders, partners, parents, and teammates in the hockey world and in life. I miss those nights with the guys and their families.

Stortini is in his third season with the Wolves. Last year was very challenging with the season cancelled and he and the coaching staff had to really encourage players not to get discouraged as many struggled with not playing and wondering how the lost season could impact their pro hockey dreams.
I won’t be surprised to see Stortini become a future head coach in junior or possibly higher. He is an excellent communicator, compassionate and always willing to learn.
Interviews/Pressers
Oilers Talk
Recent articles from Jason Gregor