Who Will Step Up to Fill Evander Kane’s Void? 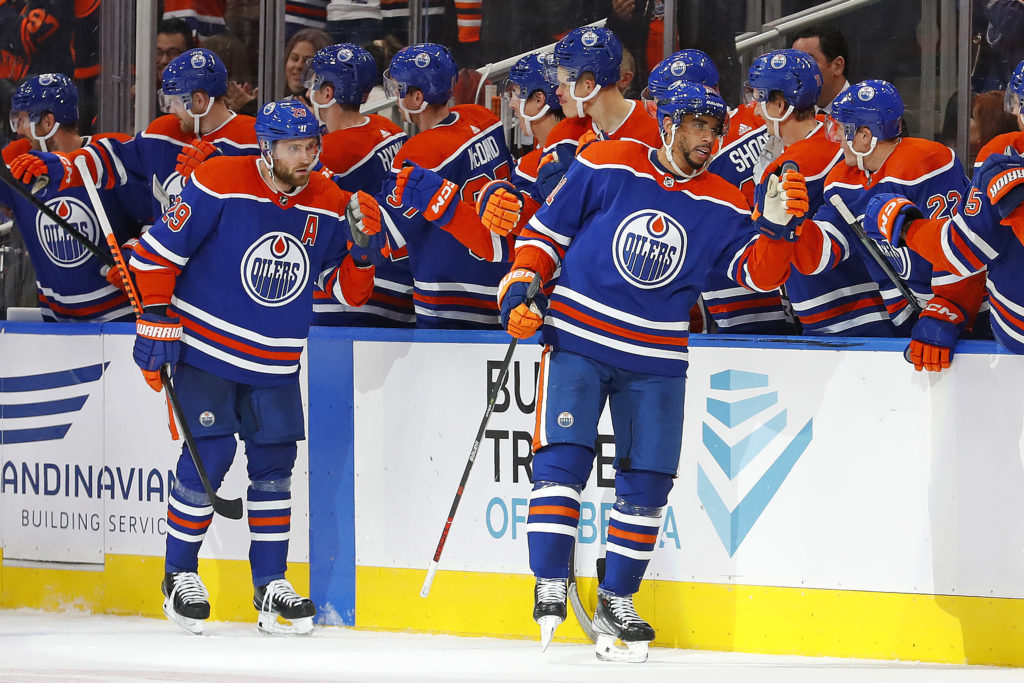 Oct 24, 2022; Edmonton, Alberta, CAN; The Edmonton Oilers celebrate a goal scored by forward Evander Kane (91) during the second period against the Pittsburgh Penguins at Rogers Place. Mandatory Credit: Perry Nelson-USA TODAY Sports
Kane is a true power forward. I think Hyman is a 2000-version of a power forward. Strong, skilled, and relentless, but without the fighting aspect. You don’t need the latter as much in today’s game. Kane has become a big fan of Hyman’s overall play after skating beside him for over 70 games.
“His strength on the puck really impresses me,” said Kane. “As a big strong guy, myself I wonder, why can’t guys move him off of the puck or how is he able to hang onto it down low or keep it on his stick with D-men all over him and come out of scrums and piles with the puck. But after playing with him and practicing with him, you have a great appreciation for his strength and his sturdiness on the puck. I think that is one of the things that he’s known for, but you don’t really get a true appreciation or impression until you are on the ice with him regularly.”
Hyman kills penalties, is the net front on the power play and plays top-six minutes at even strength. He’s incredibly versatile and reminds me a lot of Smyth. Except, last week, Smyth was quick to point out Hyman skates better. Hyman’s motor always revs high. He rarely takes a shift off. He’s in every battle, and that relentless effort makes him a great role model for the young Oilers forwards.
I asked Holland about how much Holloway, and even Puljujarvi and Yamamoto can benefit from watching how Kane and Hyman play.
“I’m a big believer in role models,” said Holland. “I really think Mike Smith had a positive effect on Stu Skinner as an example. I know Igor Larinov had a real positive affect on Pavel Datsyuk, and Nick Lindstrom on Niklas Kronwall. So, absolutely I think that helps and when people talk about culture, I think that creates it.
“For me culture is really good people, you have really good people who do it right every day, they have a great respect for how hard it is to be good, and they have a real commitment on the and off the ice. I think that’s why guys like Connor and Leon and Darnell Nurse, Hyman and Kane are great for a young player like Dylan Holloway. He’s watching really good pros and how they go about their business on an everyday basis. On the ice, helping to prepare for games, they get to go out for dinners with them on the road, he sits in the locker room. When you’re around that environment you start to understand how they train in the offseason, so that’s what culture is. I watched the growth of our team grow in leaps and bounds over the last three years and that’s a credit to the leadership of our team that they do it right.
“They have a passion for the game. They are incredibly committed. They are determined for team success and that’s a really good environment for the young guys like [Xavier] Bourgault, [Philip] Broberg, Holloway, Skinner and still Yamamoto and Puljujarvi and others. Certainly, the coaching staff is important and how they have everything structured, but it is the people you’re sitting next to in the locker room who are going to have the greatest impact in a young player’s career. And I think we have lots of really great people, we have a room full of really good people who really care. I think that it’s a really good environment for Holloway’s development and growth. Now, you’ve also got to play. There’s a multifaceted thing, but certainly being around those people is going to have a real positive impact on his career,” said Holland.
His last comment about “you need to play,” is accurate and with Kane’s injury Holloway should become a regular in the top nine. Will Jay Woodcroft deploy Ryan Nugent-Hopkins, Hyman, Puljuajarvi, and Yamamoto as his top-six wingers and play Holloway with Ryan McLeod and Foegele? We’ll see. Maybe he will keep Hyman on the right side and bump Holloway into the top six. We will find out at the morning skate tomorrow.
Regardless of who gets promoted and what the line combinations are, the Oilers will miss Kane’s scoring, his physicality and his intimation.
Players always want more opportunities and responsibilities, so who among Puljujarvi, Foegele, Yamamoto, and Holloway will step up and meet the challenge?
Editorials
Featured
Oilers Talk
Recent articles from Jason Gregor