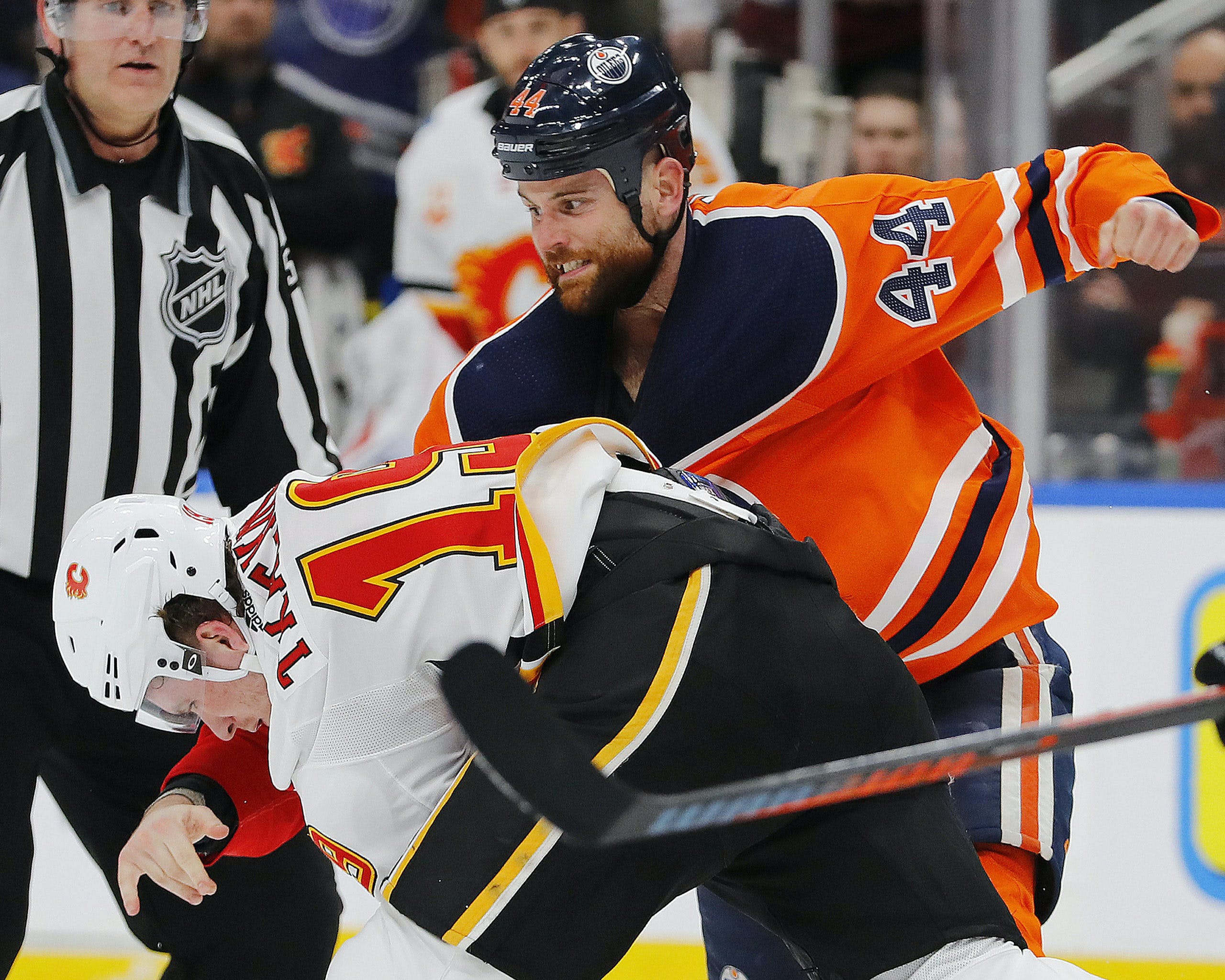 By Zach Laing
1 year ago
The Edmonton Oilers unveiled their expansion protection list and there really weren’t any major surprises.
All signs pointed to leaving Oscar Klefbom and Tyler Benson exposed as Zack Kassian and Josh Archibald got protected. But I’m here to tell you it was a mistake.
It was an easy decision to protect a young, still promising prospect in Benson, but Ken Holland went against his own volition to protect low-floor, low-ceiling bottom-six grinders in Kassian and Archibald.
This past year, Kassian was nothing short of a disaster. Fresh off signing a four-year, $3.2-million deal, he fell flat at the start of the season and was whisked off Connor McDavid’s wing less than 10 games into the season as he struggled to generate offence.
Then he got hurt. After being called out by his coach, Kassian fought Erik Gudbranson 1:43 into a Feb. 8 game and he broke his hand. A month later, he came back but still wasn’t the same. Just as he seemed to be finding his way in a bottom-six role, he again got injured in April landing him on the LTIR.
This up and down season is a microcosm of Kassian’s entire career. A first-round pick in 2009, he struggled to gain traction every step of the way in his NHL career. Even with the Oilers, where he found the most consistency of his career, he’s been very inconsistent.
When he’s on his game, he’s a dynamic player for the Oilers. He’ll play physically, get to the dirty areas, and puts up points. The problem is that more often than not this isn’t the type of game he brings to the ice.
At 30 years old with $3.2-million AAV and three years left on his deal, there’s a very good chance he doesn’t finish the length of his contract an Oiler.
In Archibald, the Oilers chose to protect a replacement-level player. A good penalty killer, yes, and he can bump up the lineup in a pinch, but the truth is that these Archibald-esque players are a dime a dozen in free agency no matter how you cut it.
With the Oilers protecting these two forwards, they’ve in turn allowed Seattle the easy choice to select Tyler Benson in expansion in a move going against everything Ken Holland has stood for in his career. For years, we’ve all heard out of Detroit how Holland loves to overripen prospects and allow them to develop before putting them in the NHL. It’s something we’ve already seen by Benson being in the AHL last year and Evan Bouchard riding the pine in Edmonton.
The change of course by potentially allowing Benson to walk is a risky move.
The Oilers are in need of cap space. It’s at a premium now more than ever after the club elected to trade for Duncan Keith’s full $5.5-million salary.
While Kassian and Archibald aren’t the types of players the Kraken would likely select in the first place, the Oilers in turn chose to expose an easy layup pick for an expansion team. Once again I don’t think the Kraken would take Kassian. But the risk of losing Benson, to me, is not worth it when I look at the Oilers organization.
It’s not like Benson is a scrub. He’s had a very productive start to his pro career In three seasons of AHL action, scoring 34 goals and 141 points in 156 points. Last season, he scored the fifth-most points in the A. In 2019-20, he scored 36 points in 47 games. In 2018-19, his first pro season, his 66 points in 68 games were the eighth-most in the league. This past year he spent time in the Swiss League scoring 19 points in 15 games.
According to prospect projections from JFresh Hockey, Benson has a 44 percent chance of playing 200 NHL games with a positive WAR. His career NHLe for the AHL has him as a ~40 point/82 gm season player in the NHL.
Protecting Kassian and Archibald over Benson is an unforced error by the Oilers and one that could cost them by limiting their cap space flexibility and allowing a good prospect to walk for free.
Zach Laing is the Nation Network’s news director and senior columnist. He can be followed on Twitter at @zjlaing, or reached by email at zach@oilersnation.com.
Nation Takes
News
Oilers Talk
Recent articles from Zach Laing