With Leon Draisaitl out of the lineup, Edmonton Oilers score four in first period against Seattle Kraken 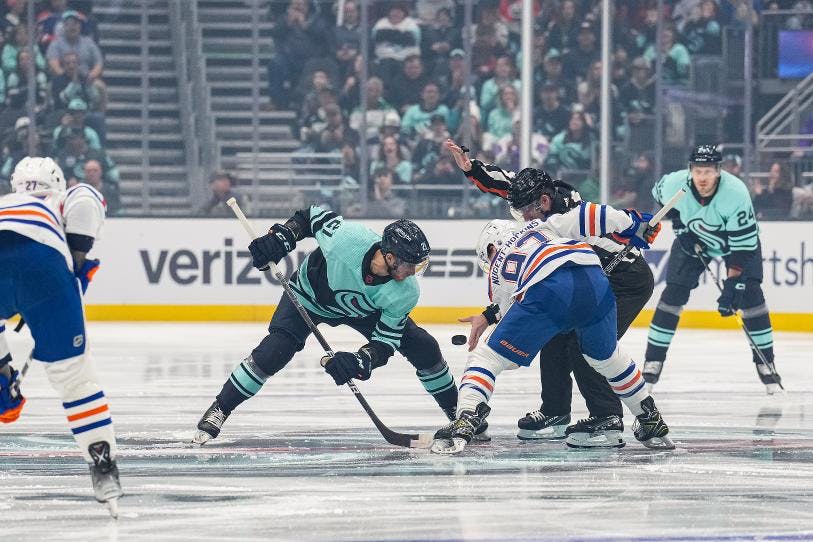 By Zach Laing
26 days ago
Leon Draisaitl was missing from the Edmonton Oilers lineup as they took on the Seattle Kraken Friday.
The first to report that he was likely out of the lineup was our own BaggedMilk.
What’s kept Draisaitl out of the lineup is unknown, but the Oilers have responded tremendously. Five minutes into the game Edmonton was already spotting a 3-0 lead having chased Phillip Grubauer from the Kraken net.
Zach Hyman got the first one on the powerplay with Klim Kostin scoring on a beautiful backhand goal in tight in front of the net. Moments later, it was Darnell Nurse blasting one home.
Jesse Puljujarvi scored his second goal in his last five games later in the frame, and the Oilers held a 4-0 lead heading into the first intermission.
Draisaitl, meanwhile, misses his first game of the season. Heading into the game, he ranked second in the league in points with 57 — a five-point lead over the third-placed Jason Robertson. He also entered the game tied for fifth in goals with 21 on the season.
Given that he’s out tonight, it’s hard to imagine him being in the Oilers’ lineup Saturday night when the team take on the Winnipeg Jets at home.
Zach Laing is the Nation Network’s news director and senior columnist. He can be followed on Twitter at @zjlaing, or reached by email at zach@oilersnation.com.
Featured
Nation Takes
Oilers Talk
Recent articles from Zach Laing