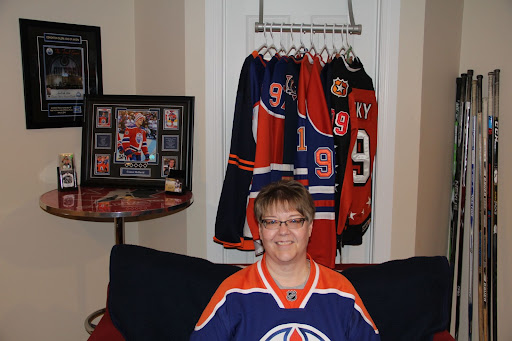 KYLA: Who is Donna? What’s your day job, what are your passions, what’s something interesting about you?
DONNA: Who is Donna? I suppose it would depend on if you asked my family, friends or co-workers! I grew up on a dairy farm about two hours north of Edmonton near Athabasca. My Mom taught private music lessons in our house and my dad of course was a farmer. My brother and I were typical farm kids who had to do chores in the morning, go to school, come home and do more chores, then do it all again the next day.
As I grew older I became interested in so many things but still didn’t know what my true passions were. We didn’t have a lot of opportunities to travel as kids but when I did get the chance I jumped at it! I remember standing in the middle of Red Square in Moscow, as a 17-year-old girl being surrounded by black market purchasers wanting to buy the Wayne Gretzky jersey right off my back. They loved hockey as much as I did but couldn’t get any jerseys in the recently collapsed USSR and were paying top dollar. I wouldn’t sell – it was insane and I loved it! Travel and sports became my new passions and still are to this day!
I eventually took those passions, combined them with my love of music, and became a Music and Social Studies teacher. Along the way I had many interesting jobs and learned some unique skills. I did everything from street sweeping, sewer cleaning and even dug a few graves. But, the day job that stuck was as a teacher. Watching kids’ eyes light up when they hear or learn something new or having them ask question after question about the world around them is what makes my heart happy everyday!
KYLA: How did you get into hockey and sports in general?
DONNA: I got into sports as a kid after school so I didn’t have to go home and do chores. I joined every sport and club possible as that was my only out from milking cows after school. Organized hockey of course was not an option as girls didn’t play on hockey teams then. I did however play soccer or hockey with the boys everyday at school during any break possible.
Why hockey you ask? There were not a lot of other things to do. We watched hockey on TV, we listened to games on the radio, we collected hockey cards, we played hockey outside, we talked about our favorite players and we pretended to be our favorite players. It was just what we did. I wanted to play and I wanted to be as good as the boys! I had to work hard. But, I was tough, had the grit, determination and drive to be just as good as any boy. Plus, I loved the competition!
I never played organized sports outside of school until I was an adult and joined my first hockey team at age 33. I wanted to be part of the community and do something I loved while at the same time get to meet new people and be part of new adventures. Sports, specifically hockey, is a huge part of who I am.
KYLA: What do you love most about continuing to play sports as an adult?
DONNA: As an adult, sports is about spending time with others outside of my work environment. My sports family is different from my work family. It’s an opportunity to interact with others, share my love for the game and of course get some kind of exercise. It’s important for me to be part of a bigger community and sports does that.
KYLA: As someone who works with kids, what impact do you see sports having on youth and why do you think it’s important that kids, and especially young girls, play sports? 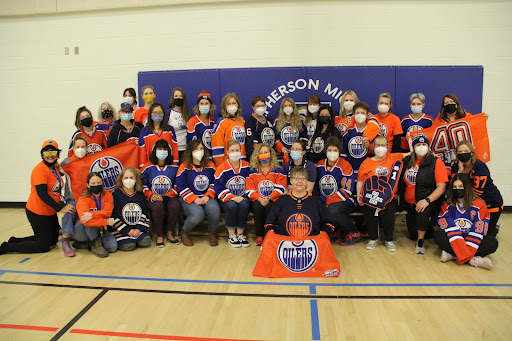 The “Mighty” Women of Oilersnation from A. Blair McPherson School
DONNA: Everyday I have the perfect opportunity to make a positive influence on youth. Yes, we are here to grow their minds and make them become positive contributing members of society. Sports can help us do that. Besides the obvious positive impacts on their overall development and physical health, sports impacts kids socially, emotionally and even academically. Sometimes sports is the only thing that gets kids to school and that’s okay. Once they are there we can then build those connections to other parts of their education needs.
Girls should definitely be involved in sports. It helps build their confidence, self-esteem and they are definitely fierce competitors. Teachers are role models, cheerleaders, and coaches when we bring sports into schools. There are many other ways we do this but sports is a great one. I am lucky to be surrounded by an amazing group of colleagues who serve as role models for girls every single day. We want them to be successful and confident women as they grow older and sports can help them get there. None of us are sports superstars but we know we can make an impact in their overall development and empower them as strong, independent, healthy, and confident women.
KYLA: What’s your favorite Oilers memory?
DONNA: I have so many memories associated with the Oilers it’s hard to pick just one! As a kid my best memories were watching games with my brother on our fuzzy old-school Zenith TV. We had to set the dial just right to even see any type of picture. Saturday nights on CBC were always clear as that’s pretty much the only channel we got in the country. But, in the winter it was a bonus when it was cold as we would actually be able to watch the Wednesday night games on TV if we crawled up on the roof and turned the antenna just right. I would hang out the window while watching the tv and my brother would turn the antenna until we got the best possible picture. Sometimes we had to adjust between periods but at least we got to watch! If we couldn’t watch we would listen to Rod Phillips in our bedrooms even though we weren’t supposed to. When the Oilers would score we would bang on the wall and then hear the yell down the hall from our parents – “Go to sleep you two!”
As an adult, the best memories probably come from the 2006 playoff run. Even though the Oilers were in 8th place, my brother and I were so excited we were in the playoffs! We decided this was our chance to attend our first EVER playoff game. Even though it was early in our careers, we spent the money to go to game 3 against the Red Wings. That game did not disappoint as it went to double overtime! Thankfully we won the game but the funniest part of that night was calling home (on a payphone as it was pre-cellphone days) after the first overtime to say we were going to be late. A family member at home had fallen down the stairs and was waiting for us to get home to take her to the hospital as her leg appeared to be in bad shape. We weren’t about to come home during overtime so she waited on the living room floor until the game was over and we could take her to the hospital where she ended up being in a cast for the next two months! She has still never let us live it down that we chose the Oilers over her.
Although the prices got higher and it was harder to get tickets we ended up going to a game in each round. We got to see wins over the Sharks, Ducks, and Hurricanes. For game 7,  we rented a community hall, invited all our family and friends, and although it wasn’t the outcome we hoped, together we celebrated the BEST CUP RUN EVER! One day we will get to do it again!! 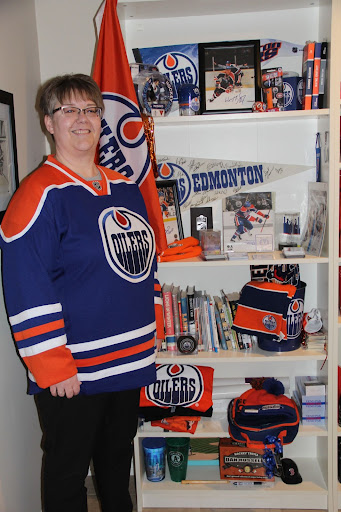 KYLA: What does hockey and being a part of the Oilersnation community mean to you?
DONNA: Hockey is connection. It connects people of all ages and from every possible background. It connects families, communities, provinces (well maybe not Flamesnation and Oilersnation), our country and in many cases connections have been made around the world where no one would have thought possible. To me, all of these connections lead to enjoyment and happiness and no one can say we can’t benefit from a little more happiness in our world right now!
Being part of Oilersnation brings me happiness. We all know it’s been many long years on the Oilers rollercoaster,  but it’s still something we are proud of and provides everyone with a sense of belonging. We are part of something bigger and win or lose we are connecting to so many others with our overall love of the game! I laugh out loud on the daily at the comments, memes, videos and everything else shared by other Oilersnation members.
Oilersnation brings me joy and I’m proud to be a Woman of Oilersnation!
CONNECT WITH DONNA ON TWITTER!