KYLA: Who are you?! What’s your day job, what are your passions, what’s something interesting about you?
JENNA: Nation! My name is Jenna Winterburn (yes, just like Winterburn Rd.) I am the evening radio host at Play 107. A little about me… I am a born and raised Edmontonian and damn proud of it! My passions include our Edmonton Oilers, the Philadelphia Eagles, golfing, red wine, being in the mountains, being an over-the-top-dog mom and stand-up comedy!
Something interesting about me… I have NEVER been stung by a bee/bitten by a wasp! Ever!
KYLA: How did you get into hockey and/or sports in general?

JENNA: I had a hockey stick in my hands before I could even walk and when the walking started, I had skates on my feet! This is all thanks to my Dad. He was the most passionate hockey and Oilers fan! Everything that I know about hockey is because of him. We lost him in 2015 and I am forever grateful that he introduced the beautiful sport of hockey to me. He actually passed away while playing a rec league game. I take some comfort in knowing that he left this world doing what he loved most – playing puck!

Growing up, I wasn’t a team sports kind of gal. I tried a few but then I fell in love with Taekwon-do when I was 11 or 12. I stayed in that for over a decade, earning my black belt and some medals along the way! I am still really proud of that accomplishment! When I look back, I was pretty badass!
KYLA: What’s your favourite Oilers memory?
JENNA: I really had to think about this question because there are SO many that come to mind. The first one that I remember is from when I was very young, maybe 7 or 8 and getting to skate at Rexall Place with Georges Laraque, Anson Carter and Sean Brown. I don’t remember or know how this came to be but, I still have their autographs from the day!
At a previous place of work, I had the opportunity to host a skate at Rogers Place and Glenn Anderson was the big guest of the afternoon. He was the most down to earth and nice guy. My father-in-law’s favourite player is Anderson. He signed his jersey for my FIL with a really sweet custom message and it made my FIL’s day.
The little memories that will always stick with me are some of my favourites, too. I remember my friend and I making signs and standing by a busy road in our jerseys asking for cars to honk during the 2006 cup run. One of mine and my fiance, Dean’s first dates was to an Oilers game. Just being in a packed barn with 18,000 other people. There is nothing quite like it.
I could honestly sit here and make a list of memories that goes on forever but, I’ll stop here 😉
KYLA: Rumour has it that your fiance has an Oilersnation tattoo – what’s the story behind that? 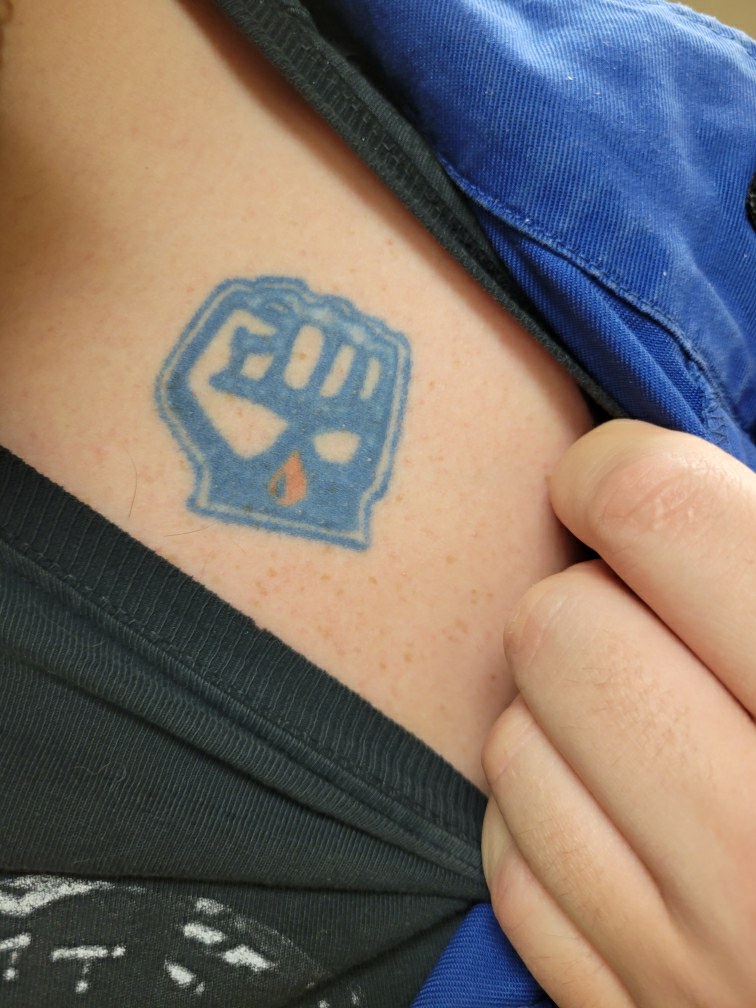 JENNA: I can confirm! He does indeed have an Oilersnation tattoo! Dean is VERY hockey passionate, especially about the Edmonton Oilers. He is like a walking encyclopedia for the team. I have always known about the Nation but Dean’s love and appreciation for it only heightened mine over the years. He is a big fan and I am pretty sure he has 90% of the Nation merch! He is my hockey, Oilersnation loving guy. Him and I actually met thanks to an Oilers Meme Fan page! 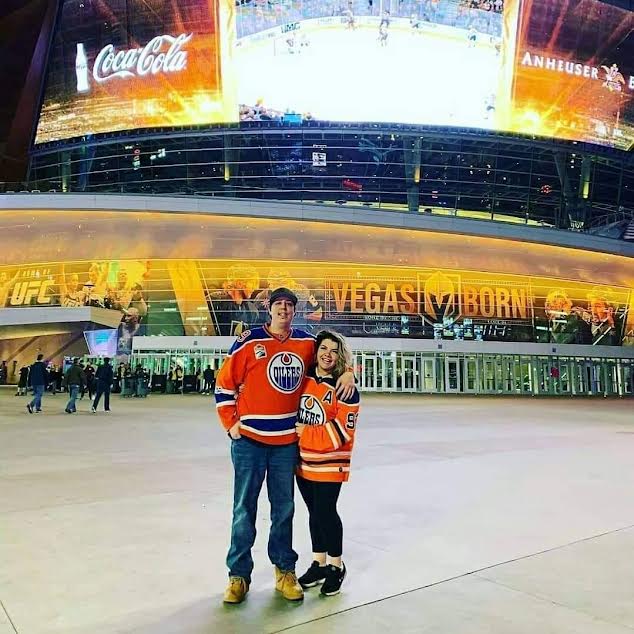 KYLA: How did you get into a career in radio and what has the journey been like for you?
JENNA: I love this question. I sound so silly when I try to explain why. I was serving/bartending out at a golf course in B.C, I was truly living my best life but I knew that a career and some stability was something that I needed in my life. I quite literally sat down and wrote out my likes/dislikes and I also did a list of my strengths/weaknesses. I compared the two lists and realized that I like people, I am a social being and that I am good at talking! A career in radio only made sense. It also helped that I had compliments on my voice throughout the years.
I finally enrolled in the Radio Broadcasting program at NAIT, a decade since my last time in a classroom. I learned SO much through those two years. I struggled a lot, as I was living alone and was putting myself through school but it was worth it! Out of school, I started doing weekends at KiSS 91.7 for a few years and then moved over to where I am now at Play! I am so lucky to be here.

KYLA: What does hockey and being a part of the Oilersnation community mean to you?
JENNA: Hockey is definitely a passion and a hobby of mine. I like reading the articles and following the tweets, trying to stay on top of everything happening in the NHL world. Sometimes it’s for my fantasy team, but, usually, I just want to be in the know!
Hockey gives me something to look forward to (the only good thing about winter is the return of the NHL, in my opinion!). Plus, when Edmonton gets excited and gets behind our team, the electricity in the city is… well… super electric and it’s the coolest thing to be a part of. Oilersnation keeps that sort of electricity coming all of the time! Getting analysis and opinion from people that are fans just like me is awesome! The Nation is always retweeting or replying to comments and that really makes you feel important and involved. Plus, the guys fire out hilarious memes. I love it.

Editorials
GDB 20.0 Wrap Up: The snakebite is real as Oilers can’t buy a goal, fall 3-0 to the New York Islanders
Do Not Sell My Info
Privacy Settings