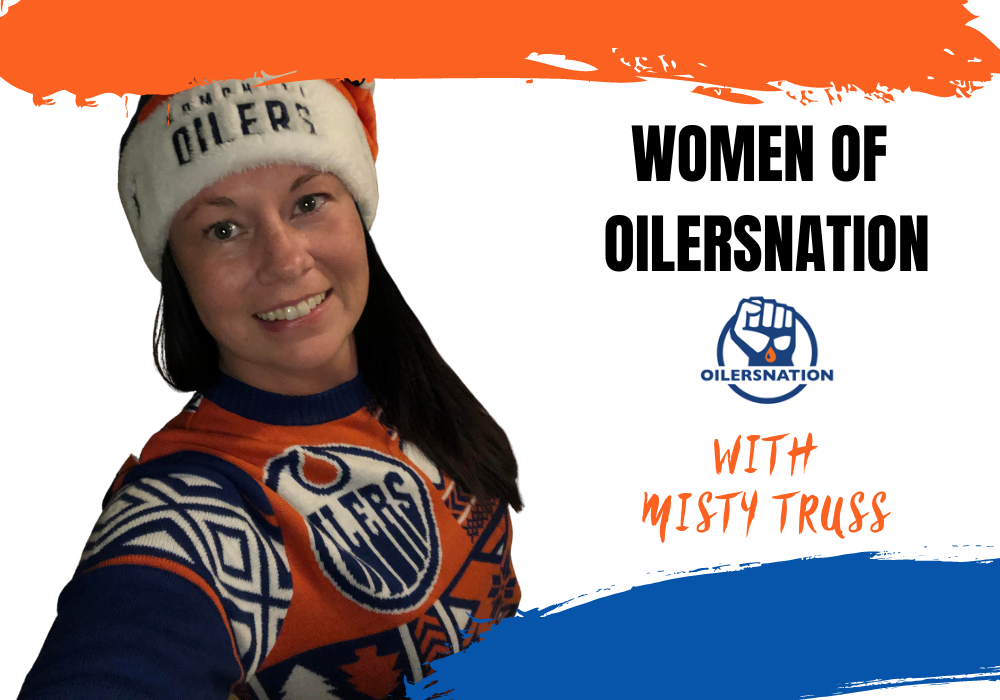 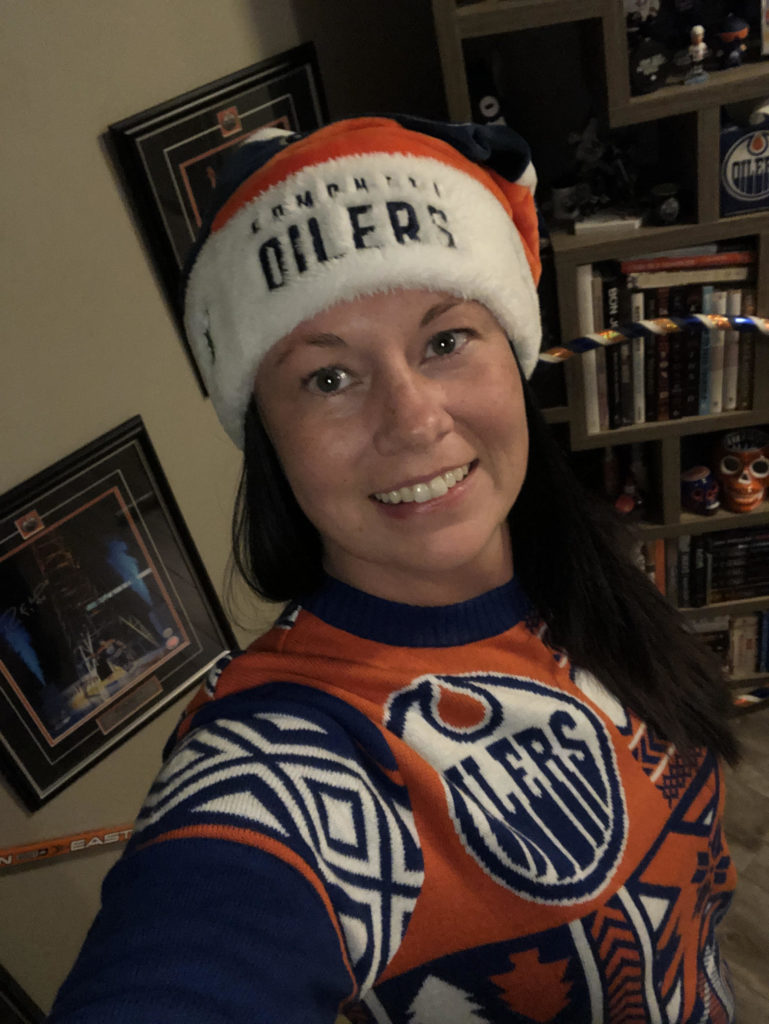 KYLA: Who is Misty? What’s your day job, what are your passions, what’s something interesting about you?
MISTY: Hi! My name is Misty. I was born in Lloydminster, SK and have lived in various places in both BC and Alberta.  I am currently working in the healthcare field as a Pharmacy Technician at the Alberta Hospital.  I love my job and I work with a great group of people.  The hospital is situated on such beautiful grounds, and I get to enjoy nice walks on my lunch breaks throughout the year on our 2km walking trail.
My passions include: Sports (hockey, football, baseball, F1 racing, 90’s wrestling, Olympics), etc.  When I am not planning my life around watching sports I enjoy being active, watching doggy videos, music/concerts, and spending time with my very dear friends.
A few interesting things about me:
I love attending concerts.  It’s medicine for the mind for me.  I’ve seen Bon Jovi, Bruno Mars, Metallica, Kings of Leon, Tom Petty, Garth Brooks, Zac Brown, Chris Stapleton, AC/DC and Tool just to name a few.  My next concert (if it doesn’t get postponed again), will be Rage Against the Machine!
I take care of my health and wellness. I started really noticing the benefits and need for this once I turned 40!  A person’s physical and mental health is so important.  I try to be active, whether it’s walking/jogging/going to the gym/or trying Pickleball for the first time this summer!  I like to push and challenge myself mentally and physically throughout the year.  I’ve done various 5-10km walks/runs, which I am proud of and eventually I hope to do a half marathon. 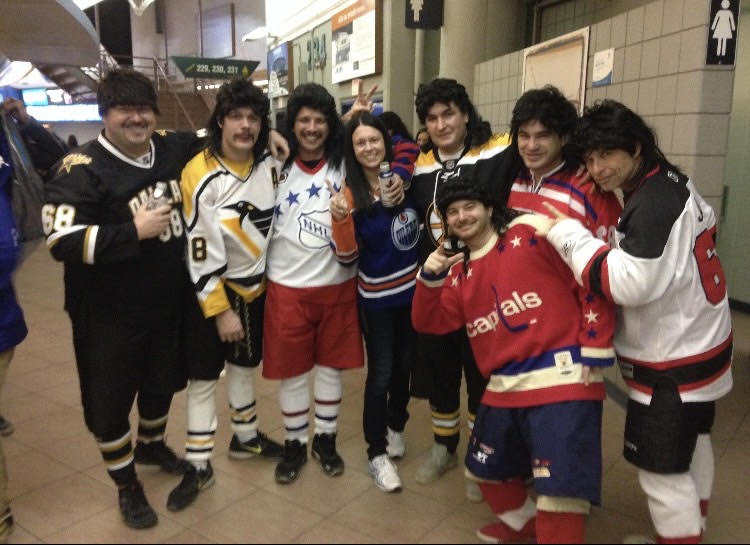 Another fun fact is that I met the Traveling Jagrs!  I’ve always been a big fan of Jaromir Jagr and there’s a group of guys from Calgary who dress up like Jagr and wear mullet wigs and various jerseys of teams that he’s played for throughout his career.  I went to the games in Edmonton when Jagr was in town and I’ve ran into the Traveling Jagrs on more than one occasion.  Just a fun bunch of guys that are passionate about their hero, which I can relate to and admire!
KYLA: How did you get into hockey and sports in general?
MISTY: I’m not sure what it was exactly, but I do remember when I was a little girl and I went to see Santa Claus and he asked me if I wanted a barbie doll or a hockey stick.  I chose the hockey stick and I still have that stick to this day.
I fondly remember my weekly conversations I had with my grandfather (who passed away this year) on the phone every Sunday night and our main topic of conversation was hockey, how the Oilers were doing, and whether we thought they’d make the playoffs that year.
We didn’t have much money growing up but I remember taking a year of gymnastics and loving it.  It’s unfortunate I didn’t have the support/money to participate in sports as a kid because I think I could’ve really benefited from it.  But maybe that’s why I grew to love it so much as I could only watch and cheer from afar.  I did play a year of softball a few years ago and had a blast.
KYLA: I hear you’re also a Smytty fan – What’s your favourite Ryan Smyth memory? 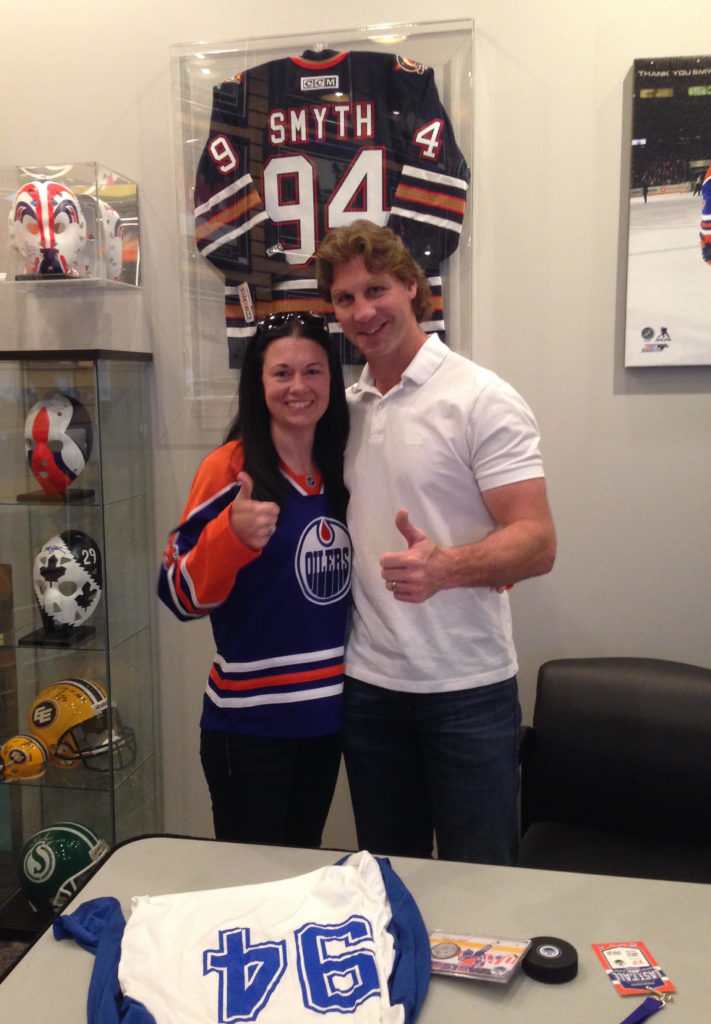 MISTY: At this moment, two stand out in my mind.  Of course, the game where he took the Pronger shot to the face and lost 3 teeth in the 2006 Stanley Cup playoffs against the Sharks.  Then he came back after getting his face stitched up and got an assist on the winning goal in triple OT!  However, that playoff run ended in heartbreak as they lost game 7 to the Hurricanes in the Stanley Cup final.  Smytty has won many accolades and medals but never got that elusive Stanley Cup.  I am still bitter about it!
And of course, his last game at Rexall.  I remember managing to buy seats a couple rows behind the Oilers bench for the final game of the season in 2014.  I got them for a great deal as the Oilers didn’t make the playoffs that year and Ryan Smyth hadn’t announced his retirement yet from the NHL.  He announced his retirement a few days before the game and I was so thankful I had purchased these tickets!
I really just spent the whole game watching Smytty.  Knowing this was the last time I’d be seeing him play, my focus was all on him.  I was able to see such special moments between him and his teammates.  After the game, he did his final skate on the ice.  His wife Stacy and his children came out.  He was so emotional himself & it just made me more emotional.  My favourite player retiring and being able to see it live and up close.  It doesn’t get better than that.  I’ll never forget it.
KYLA: You’ve participated in multiple Mud Hero runs and MS walks over the years. What do you love most about doing those?
MISTY: I first learned about the disease through my friend.  Her mom had MS and she told me about her struggles.  Then, one of my best friends got diagnosed with MS and I wanted to support and help however I could.  They have a yearly MS walk/run that I’ve participated in since 2013.  There is a group of us that go every year to help support and raise money for MS.  Since then, I met another girl at work who has MS and we’ve become really good friends, so the fight against this disease is personal for me.
The Mud Hero run is all about fun!  Multiple obstacles while covered in mud.  They have 6km or 10km routes.  It’s challenging and you feel a sense of accomplishment once you’re done.  I love how everyone cheers you on and even if you miss or can’t complete an obstacle, people will encourage you on to try again so you can complete it.  I first attended the event in 2015 with my sister and a group of friends.  Since then, I’ve participated every year since with various other friends and have a blast every year.
KYLA: What’s your favourite Oilers memory?
MISTY: When the Oilers won the Stanley Cup in 1990.  I feel like I was more invested in this playoff run as I was a bit older.  When the Oilers won the cups in the 80s, I was still quite young.  But I remember quite a few things about their 90’s run.  The first game of the Stanley Cup Final where Petr Klima scored the OT goal in Boston in the third overtime.  The power went out that night and the game was delayed and I remember staying up late and running outside to yell and scream when Klima scored!  Bill Ranford was outstanding during that playoff run and won the Conn Smythe.  I really wanted them to win a Cup without Gretzky.  I still remember Messier celebrating the cup win with that huge grin on his face and saying “This is for Gretz!”
KYLA: What does hockey and being a part of the Oilersnation community mean to you? 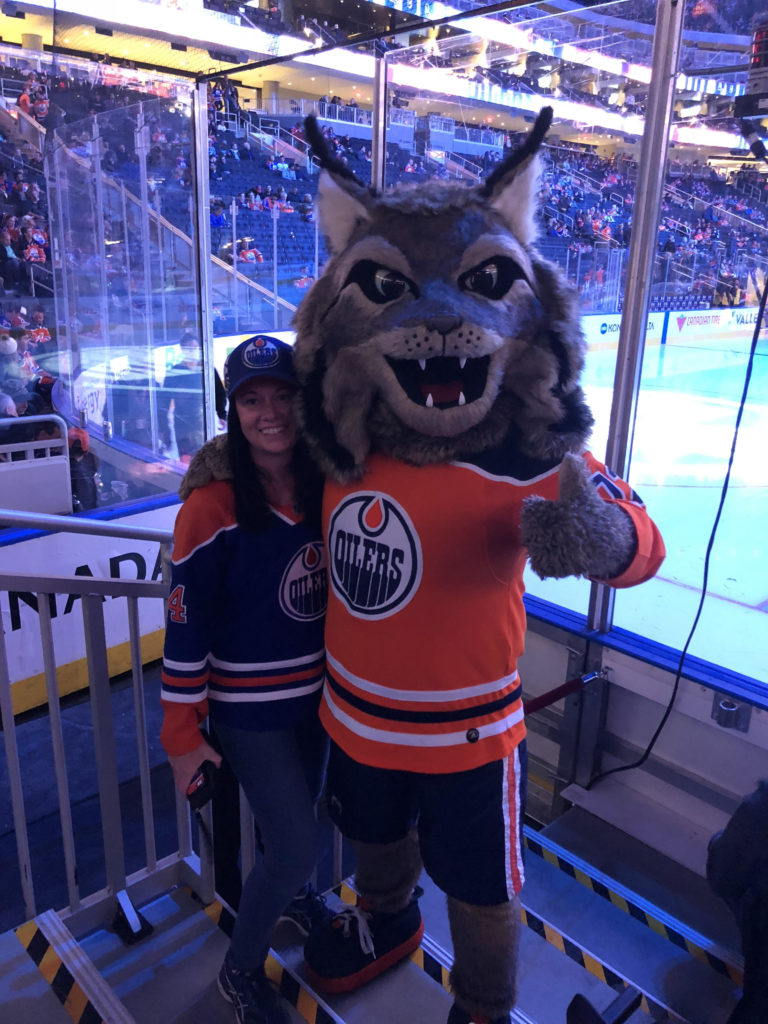 MISTY: I know it sounds silly but hockey is everything to me.  I follow the NHL all season long and everyone who knows me knows that hockey is my passion. Being a hockey fan is such an emotional rollercoaster!  Happiness, sadness, rage, laughter, tears, etc.  Even if the Oilers aren’t in the playoffs, I watch the playoffs faithfully.  It doesn’t get better than watching good and exciting hockey.  Of course, I root and cheer for former Oilers (Patty Maroon, Jordan Eberle, Cam Talbot, etc).  Thank goodness I have my Patty Maroon to cheer for—Mr. Three time Stanley cup champion in a row!
Being part of the Oilersnation community is a huge honour!  It’s a place to connect with fellow Oilers fans who understand your obsession.  I am just a die hard hockey fan and always will be.  It’s so nice to be part of a community with people who are as passionate about the Oilers as I am.  I hope one day I can meet everyone in person!  Thank you so much for asking me to be a part of the Women of Oilersnation!
CONNECT WITH MISTY ON TWITTER!