By Cam Lewis
1 year ago
Last week, we took a look at how the teams in the Pacific Division did last season and looked ahead at what to expect in 2021-22. Sticking with the theme of predictions, this week’s What Would You Do Wednesday will be about predicting next seasons’ award winners.

2021 winner: Connor McDavid
A member of the Edmonton Oilers has won the Hart Trophy in back-to-back seasons, as Connor McDavid took home his second Most Valuable Player award in 2021 after Leon Draisaitl won his first in 2020. It’s always a good bet to assume McDavid will win again next season.
McDavid’s season in 2021 was absolutely insane. He scored 105 points in the 56-game shortened season, just 11 points shy of matching the career-high he set back in 2018-19 in 22 fewer games. The next highest scorer was Draisaitl, who had 84 points, and then Brad Marchand, who had 69.
After that showing, it was automatic that McDavid would win the Hart Trophy. He received every single first-place vote, becoming the first unanimous winner since Wayne Gretzky in 1982.

2021 winner: Connor McDavid
Just like with the above, the Art Ross Trophy for the league’s leading scorer has been won by an Oiler in back-to-back seasons. Draisaitl led the league in 2019-20 while McDavid took the scoring title by a massive margin in 2021. Again, it’s a good bet to assume McDavid will win this one again.
In six seasons in the league, McDavid has won the Art Ross three times. He didn’t win in his rookie season as he was injured half of the year, Nikita Kucherov won in 2019 with a massive 128-point showing on a stacked Tampa Bay Lightning team, and Draisaitl, as previously mentioned, won in 2020 partially due to McDavid playing seven fewer games over the course of the year.
If McDavid operates at the same pace over an 82-game season that he did in 2021, he’ll score 154 points. It’s very exciting to think about what he can do next season.

2021 winner: Auston Matthews
Since the Rocket Richard Trophy was introduced in 1999, @Alex Ovechkin has won the award nine times. No other player has led the league in goals over that time more than twice, as Ovechkin, Pavel Bure, Steven Stamkos, Jarome Iginla, and Sidney Crosby are the only multi-time winners.
Last year, @Auston Matthews became the 14th different player to win the Rocket, as he led the league with 41 goals over the course of 52 games. That’s impressive production, especially considering the fact Matthews was playing a good chunk of the season with a wrist issue that ultimately resulted in off-season surgery.
Matthews is probably the favorite to lead the league in goals in 2021-22, though many names, such as McDavid, Draisaitl, Ovechkin, David Pastrnak, and Nathan MacKinnon, will be in the mix as well. 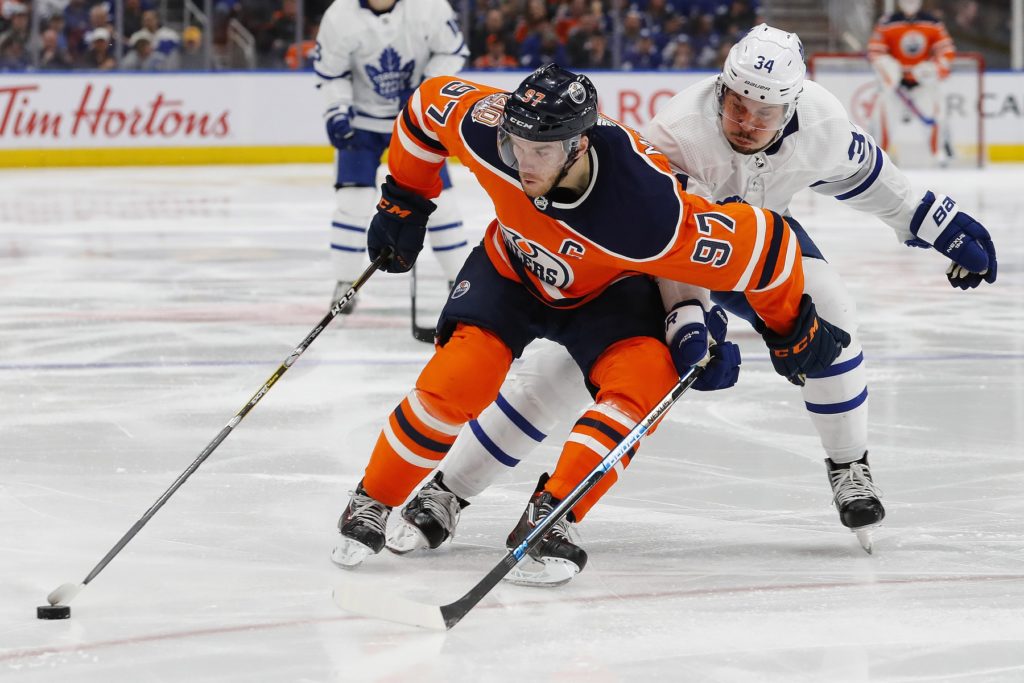 2021 winner: Adam Fox
Unlike in the 2000s when Nicklas Lidstrom was nearly an automatic, the Norris Trophy has become one of the most difficult awards to project over the past decade.
Since Lidstrom was last crowned as the league’s top defenceman in 2011, nine different defenders have won the award. There’s also been a first-time winner in each of the past five seasons and nobody has gone back-to-back since Lidstrom did so in 2007 and 2008.
The unpredictability of the Norris was on display in 2021, as Adam Fox of the New York Rangers won the award, something very few would have predicted heading into the season. Fox had a great rookie season in 2019-20, scoring 42 points in 70 games while logging 18:54 per night, and then he broke out in 2021, scoring 47 points in 55 games while playing 24:42 per night.
Veterans such as Victor Hedman and Roman Josi will be in the mix along with Fox and other young defenders like Cale Makar, Miro Heiskanen, and Charlie McAvoy. We could also see a darkhorse first-time winner, such as Dougie Hamilton or Darnell Nurse, win this thing in 2022. It’s anybody’s guess.

2021 winner: Marc-Andre Fleury
Like the Norris, the Vezina Trophy for the league’s top goaltender is a difficult one to project. Since four-time winner Martin Brodeur last won in 2008, we’ve seen 11 different winners, with Tim Thomas and Sergei Bobrovsky being the only ones over that period of time to win twice.
In 2021, veteran Marc-Andre Fleury won the award, adding a nice piece of hardware to a surefire Hall of Fame career. Fleury played in 36 games for the Golden Knights and posted a .928 save percentage, the highest figure of his career. He narrowly edged out 2019 winner Andrei Vasilevskiy, who had a .925 save percentage over 42 games.
Vasilevskiy has finished in the top three in voting for the award in each of the past four seasons, so he’s always a good bet to win. The same goes for Connor Hellebuyck, the 2020 winner, as he’s finished in the top five in voting in three of the past four seasons.

2021 winner: Kirill Kaprizov
Given No. 1 and No. 2 picks from the 2021 draft, Owen Power and Matty Beniers, are likely returning to the NCAA next season, the Calder Trophy race for the league’s rookie of the year is wide open.
Last season, Kirill Kaprizov, a fifth-round pick from the 2015 draft who spent half a decade in the KHL, won the award after putting together a 51-point season with the Minnesota Wild. He was 24 years old, so this situation was somewhat reminiscent of when the undrafted Artemi Panarin won in 2015.
There are plenty of names to consider here. Cole Caufield, who was huge for the Habs in their playoff run this spring, is probably the current favourite, while Trevor Zegras, Moritz Seider, Spencer Knight, and Nick Robertson, among others, are also in the mix.
What say you, Nation? Who do you predict to take home next year’s NHL awards? Let us know in the comments…

‘In life, there are so many moments to celebrate, I don’t want to waste a great moment on a bad drink. That’s why I choose Deuce Vodka’ – Brett Kissel.  Click here to find Deuce Vodka in a store ne
Oilers Talk
WWYDW
Recent articles from Cam Lewis