By Cam Lewis
1 year ago
Over the offseason, a big point of conversation was how much the newly-signed @Zach Hyman could produce playing alongside @Connor McDavid.
Hyman was a fan favourite in Toronto. He went from being a middling prospect to earning a depth role on the Maple Leafs to becoming a major contributor in the team’s top-six. Hyman’s role was being the straw that stirred the drink alongside Auston Matthews and Mitch Marner, serving as the player who went to the dirty areas of the ice, won puck battles, and crashed the net.
Naturally, it seemed as though Hyman would be an ideal fit alongside McDavid, the most skilled player in the league. But, on opening night on Wednesday, Dave Tippett had Hyman on the team’s second line with @Ryan Nugent-Hopkins, while McDavid formed the familiar dynamic duo with @Leon Draisaitl.
The McDrai duo is controversial around here. While they’re obviously dynamite as a pair, the counter argument is that loading the two former Hart Trophy winners on one line makes Edmonton’s offence too predictable and easy to contain.
On Wednesday against the Canucks, the McDrai line scored the Oilers’ only goal at even-strength, but it was the Hyman, Nugent-Hopkins, and Kailer Yamamoto trio that really drove play and dominated Vancouver in terms of shot differential.
That brings us to this week’s What Would You Do Wednesday FRIDAY EDITION question. How do you feel about the McDrai combination? Is it better for the Oilers to split McDavid and Draisaitl up? Should Tippett continue to blend lines to make the offence unpredictable? What about using all three of McDavid, Draisaitl, and Nugent-Hopkins as centres? 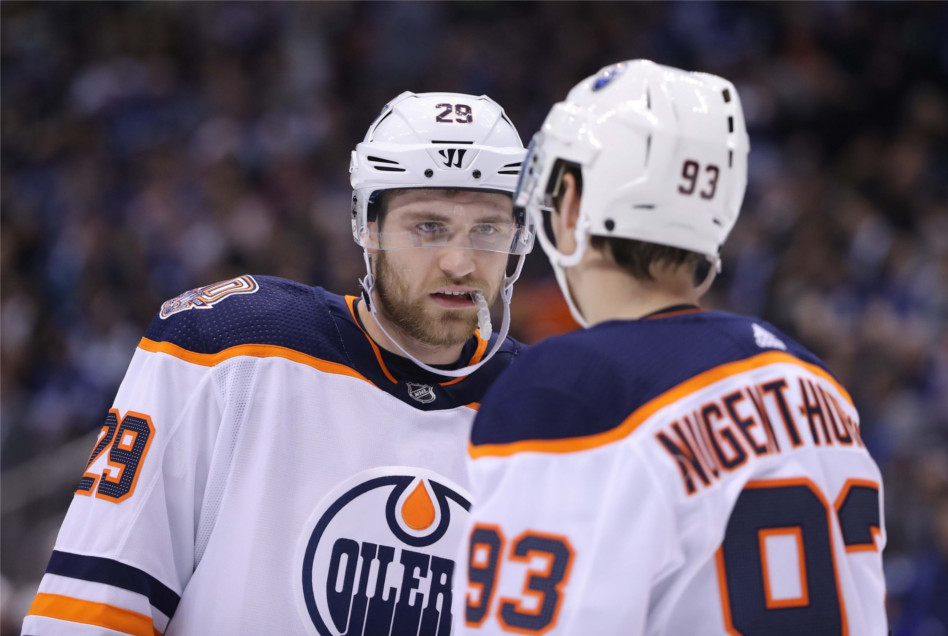 Since the start of the Dave Tippett era, Draisaitl has been McDavid’s most common linemate in terms of forwards. The duo played 1,000 minutes together at even strength between 2019-20 and 2021 and outscored their opponents 83-to-68 (54.9 goals for percentage). In the 1,084 minutes Draisaitl played without McDavid, he had a 59.7 goals for percentage, and, in the 1,124 minutes McDavid played without Draisaitl, he had a 55.1 goals for percentage.
Back during the 2019-20 season, the Oilers called up Kailer Yamamoto in late December and inserted him on a line with Draisaitl and Nugent-Hopkins. The results were excellent as the trio was among the best in hockey the rest of the season, outscoring their opponents by a whopping 28-to-8 over 317 even-strength minutes. While that line was thriving, the challenge was finding adequate wingers for McDavid.
In 2021, Tippett opted to split up that dynamite line, moving Nugent-Hopkins to McDavid’s left. Draisaitl wound up splitting his time as Edmonton’s second centre with Dominik Kahun and Yamamoto or playing as McDavid’s winger. The Draisaitl, Nugent-Hopkins, Yamamoto trio only saw 103 minutes together at even-strength in 2021.
With the addition of Hyman, the Oilers have themselves another legitimate option to play in the top-six. Warren Foegele, who has 10 even-strength goals in each of his last three seasons, further stretches out the team’s depth options. Zack Kassian is coming off of a poor 2021 season but he scored 15 goals in back-to-back campaigns before that.
So, how can Tippett best utilize the forwards he has at his disposal?
The good thing about the McDrai duo is that it takes so much effort to contain them, Edmonton’s second line winds up getting easier minutes. That’s what we saw against Vancouver as Hyman, Nugent-Hopkins, and Yamamoto rolled over the Canucks.
Back in the offseason, the lines that largely everyone wanted to see was reuniting the successful Draisaitl, Nugent-Hopkins, Yamamoto trio while placing Hyman alongside McDavid and Jesse Puljujarvi. Logic would indicate that Hyman would thrive playing with McDavid because he goes to the net and puts his stick on the ice, but that might conflict with the style that Puljujarvi has found on McDavid’s right.
Another option I haven’t seen discussed all that much is using McDavid, Draisaitl, and Nugent-Hopkins as centres. Perhaps the play here is operating with pairs (McDavid and Puljujarvi, Draisaitl and Yamamoto, Nugent-Hopkins, and Hyman) and then mixing in Foegele, Kassian, and others, such as Brendan Perlini, Tyler Benson, and Colton Sceviour.
What say you, Nation? What do you make of the McDrai combo? Should Tippett lean into it? Or should he look to spread his MVPs out more? Let us know!