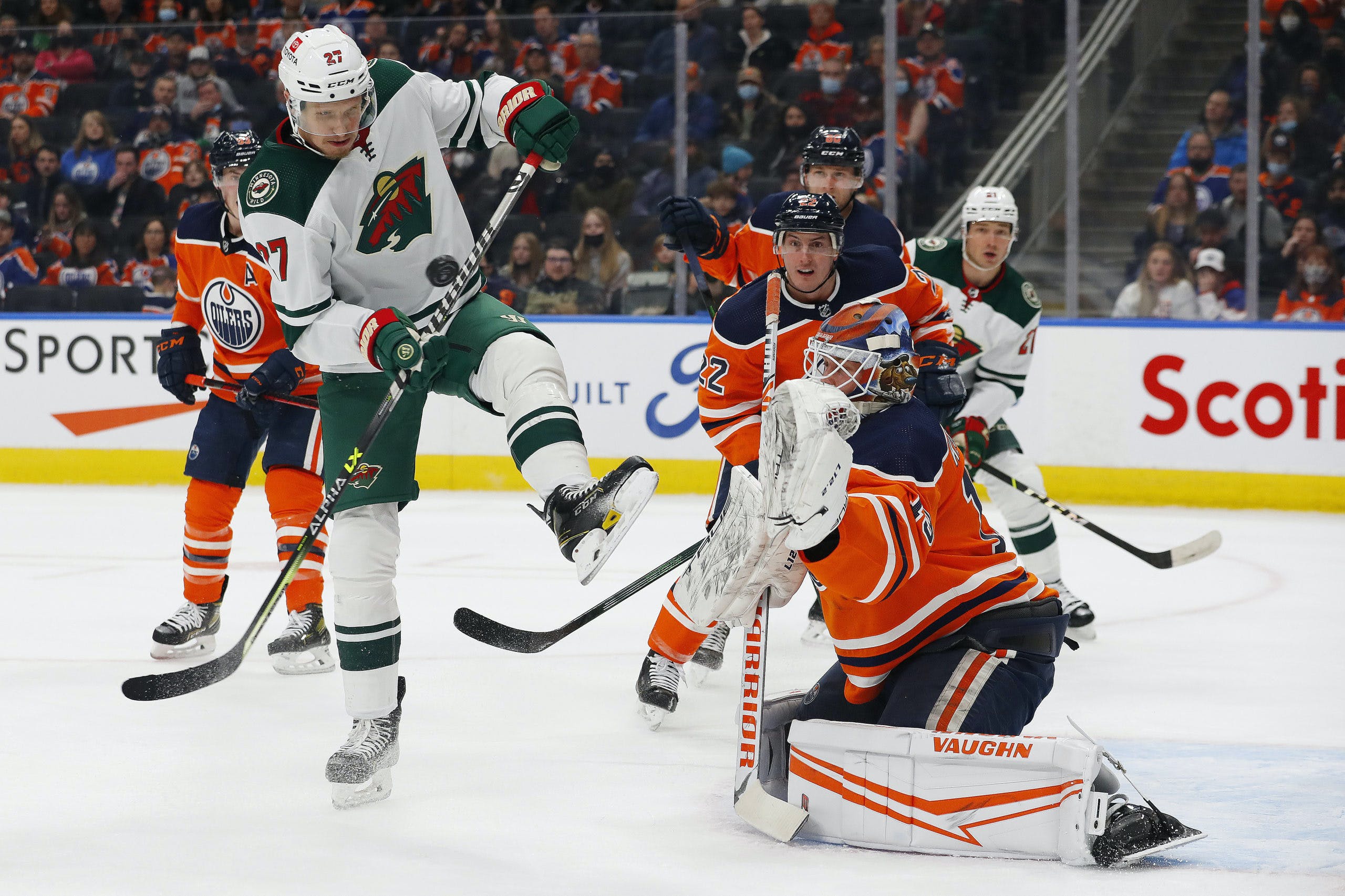 Photo credit: Perry Nelson-USA TODAY Sports
By Zach Laing
9 months ago
Comments
Ewwwwwwww. Final score: 7-3 Minnesota.
Well, they were going to lose a game at some point, right? Bright spots were few and far between tonight. BaggedMilk has the Wrap Up here.

minnesota breaks open the scoring less than three minutes into the game. pic.twitter.com/ugTOFFrB2I

alright well all of a sudden it’s 3-0 wild. pic.twitter.com/KAhRQbidhi

the oilers powerplay gets them on the board with its second goal in the last two games. pic.twitter.com/I4S2vNP4eB

this massive stop from mikko koskinen was exactly what the oilers needed earlier in the game from smith. pic.twitter.com/hGvMm9Xagk

Advertisement
Ad
Advertisement
Ad
On the game and what’s ahead: “We didn’t have much jump today. Got off to a really bad start. This league’s too hard to come back from a 4-0 deficit. I thought we had a little push in the second there, but couldn’t really get anything going. It’s going to be a tough road trip. It’s going to be a long one against really good hockey teams in this league, but we’re a really good team too. We obviously didn’t have our best tonight, but we’re going to regroup and have a successful road trip.”
On if anything can be attributed to five games in seven nights: “Yeah I mean of course, we’ve been playing a lot of games. No question, but every team goes through this. We don’t want to use this as an excuse. We had no jump today and our execution wasn’t where it needs to be. That’s a good team. You have to tip your cap every once in a while. They made some good plays. we know what we have to do to be better.”
Advertisement
Ad
Advertisement
Ad
On if the oilers can brush this game off for what it was as a team who had won five straight previously: “Yeah, I’m positive that it’s just one of those nights. We played five really, really good games in a row. Even tonight, there were stretches where we were okay. We know we’re a good team when we play the right way, when we play our way. We just have to regroup a little bit and get back to that.”
On Benson’s first goal: “It’s always great to see. I’m sure he would’ve liked it to be in a little bit of a tighter game. Regardless, this is a great moment for a younger player. It’s a special moment. Regardless of the score, it’s an amazing moment.”
On not losing two in a row: “That’s always our mentality. We know that this is going to be a hard road trip. A lot of games, really good teams we’re playing. Those are the games you want to be in — those are the challenges you get up for. Those are the teams we want to compare ourselves to eventually or right now. Good test for us. regroup, park this one, get back at it.”
Advertisement
Ad
Advertisement
Ad

On the game and what’s ahead: “Like Leon said, it wasn’t a sharp enough start and you’re trying to chase the game. You park it and move onto a big road trip here. We have a couple days to rest and recoup and then looking forward to playing some of the best teams in the league. That’s what you look forward to as a player.”
On the Oilers play in front of Mike Smith: “It was too many grade a’s whether it’s breakaways or two on ones. It’s tough to give your goalies those looks early in the game.”
On the upcoming road trip, how it’s spaced out: “I think we’re excited to get on the road. First and foremost we’re playing good teams, so that always brings your jump and your passion. You want to have a good road trip. We have some practices, so we can work on some of the systems that have been implemented the last couple weeks, grow our game. We’ve done some really good things, but there’s some errors we need to clean up at the same time. With practice and reps and becoming more and more familiar with the system we’re going to continue to get better.”
Advertisement
Ad
Advertisement
Ad

On tonight’s game, what’s next for the Oilers: “Tonight, obviously not happy with the result. Wasn’t happy with the way we began the game as a group. I thought we made some errors that can be cleaned up. You find yourself down 4-1 at the end of the first period you go into the dressing room and you talk as a group the things you want cleaned up. I thought we got a little better as the game went on, but just some mental errors that ended up in the back of our net. Give credit to the other team, they’re a good hockey team as well. Certainly, certainly our team can be better, we can be better. Now to the second part of your question about this upcoming road trip, we’re going to handle it the way we’ve handled our business over the last little while which is we’re going to take it one day at a time. We’re going to worry about the next opponent, but before we can even get to that, we’re going to worry about resting and recuperating after playing five games in seven nights. We’re going to travel down to Florida, get a good team practice in — something we haven’t had a lot of, and we’re going to come up with a game plan versus the two-time Stanley Cup champions.”
Advertisement
Ad
Advertisement
Ad
On playing in five-in-seven, if tonight was fatigue-related: “I don’t think we’re in the business of making excuses. The schedule is what the schedule is, and no one in that room I don’t think would go there. For me, what i believe is that when you find yourself in situations like this, this is why you have the structure in place — to protect the individuals during tough circumstances. In between periods, we talked about sticking together and grinding through those tough circumstances. nobody was pointing fingers, there were no independent contractors out there. We ground through it as a team. We’re going to use it as a growth opportunity going forward.”
On Mike Smith’s game: “You can’t pin that on Mike, or Mikko in any way. To me, I don’t think the team played to our capability tonight. I thought we saw some things we haven’t seen over the last week or so. The amount of odd-man rushes in the first period along was probably more than we’ve given up in the last five games. This is not on any one person. We’re going to stick together as a team on this and we’re going to own it as a group.”
Advertisement
Ad
Advertisement
Ad
On if the Oilers can brush this game off for what it was as a team who had won five straight previously: “Just going back to our initial conversation tonight, I don’t think so. We’re about the get better, the getting better every day. We’re not relying on what we did a week ago, we’re not relying on what we did yesterday. We took our lumps today against a good hockey team. We’re going to learn from it. We’re focused on having a good travel day tomorrow and then bringing a good attitude into our practice day. It will be nice to have a practice day on Tuesday. Like I said, our focus and attention is on preparing for the Stanley Cup champions here.”
On the road trip being a litmus test: “I understand the narrative, I get it. But like I said, I’m going to keep going back to this: we’ve asked our players to keep our picture small, to not worry about the noise from the outside, to just worry about controlling their effort, their energy level, their detail in practice and being their very best on a daily basis. That’s where our attention is. it starts with a travel day. It moves onto a practice day and eventually, we’re going to be ready to play the Tampa Bay Lightning.”
Advertisement
Ad
Advertisement
Ad
On Benson’s first goal, his time with him: “Tough game for the team tonight, certainly. I don’t think anyone is walking out of the building tonight feeling great about our team performance, but on an individual basis for Tyler to score his first NHL goal, he’s going to feel good about that and try to build on it as he moves forward.”
Zach Laing is the Nation Network’s news director and senior columnist. He can be followed on Twitter at @zjlaing, or reached by email at [email protected]