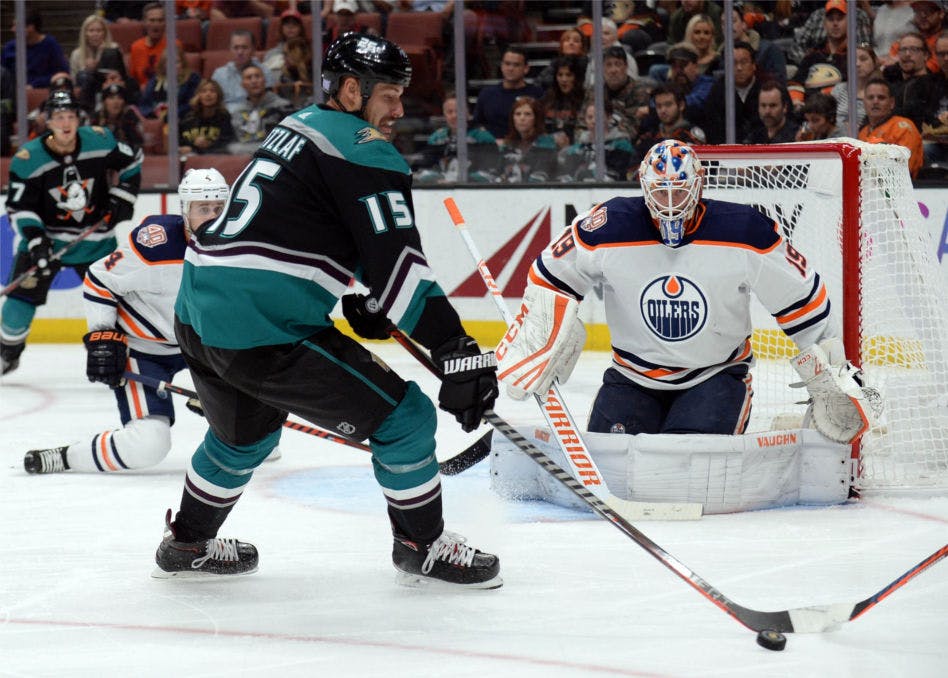 Photo credit: Gary A. Vasquez-USA TODAY Sports
By Jason Gregor
1 year ago
Comments
We continue our series on specific positional needs for the Edmonton Oilers. Last week we looked at scoring left wingers. I kept the list short, but felt after publishing the article I should have include other players who would be good additions. So today we will expand the list of centres.
Edmonton desperately needs a third line centre who can provide some 5×5 scoring and win faceoffs. Preferably he shoots right, but I wouldn’t disregard a quality centre just because they shoot left.
Young Ryan McLeod has lots of potential and upside, but Edmonton can’t enter the season assuming he is ready to be the third line centre. They need a proven option who can provide offence and win faceoffs. If McLeod develops during the year and they end up with two third line quality centres then they will be a more legitimate contender.

Jan 18, 2021; Anaheim, California, USA; Anaheim Ducks center Ryan Getzlaf (15) during a stoppage in play against the Minnesota Wild in the second period at Honda Center.
Ryan Getzlaf turned 36 earlier this month. He would be an unreal third centre, who could move to second line when you want to play McDavid with Draisaitl. How realistic is it? Probably not very much. I could see him testing market, but ultimately deciding to stay in Anaheim due to family reasons. He checks a lot of boxes. He has skill. He’s big, strong, can win faceoffs and won a Stanley Cup.
Advertisement
Ad
Advertisement
Ad
Derek Ryan turns 35 in December. He’d be a one-year deal candidate. He only had two goals and 13 points last season, after 38, 38 and 29 the previous three seasons. He is very good on faceoffs and has solid possession numbers.
Tyler Bozak turned 35 in March. He’d be another one-year deal player. He only played 31 games last season, but he had 17 points and nine were at 5×5. He is a Saskatchewan kid, so playing in Western Canada would appeal to him, and he has loads of playoff experience.
Nick Bjugstad made $5.25m last season in the final year of a $4.1m cap hit contract. He’s a large human at 6’6″ and 208 pounds. He turns 29 in July. He did play 44 games this season after only playing 13 in 2020. He has good skills, but his injury history likely means he takes a significant pay cut and a shorter term deal.
Advertisement
Ad
Advertisement
Ad
Travis Zajac turned 36 earlier this month. He didn’t fit in well with the New York Islanders after being a trade deadline acquisition. He is excellent at faceoffs, but his offence has started to dip the past few seasons. His possession numbers have not been good.
Luke Glendening is 32 years of age. He spent eight seasons with the Detroit Red Wings and they are not re-signing him. He is outstanding at faceoffs, 59.2% at 5×5 the past three seasons. He can kill penalties, and in Detroit he was mainly a defensive zone starter. He only started 33% of his shifts in the offensive zone. He won’t provide much offence. I see him more of a fourth line centre.
Brandon Sutter turned 32 in February and will be getting a pay cut from the $4.5m million ($4.375m cap hit) he made last season. He has been injured in each of the past three seasons playing in only 113 of the possible 209 games and when he did play he had many defensive zone starts with Vancouver. His goal production (eight and nine goals) the past two seasons, in 44 and 43 games, prorates to 15 and 17 in a full season. He is very good on faceoffs.
Advertisement
Ad
Advertisement
Ad
Here are their 5×5 stats over the past three seasons:
No surprise Getzlaf is the best offensive player. Bozak and Ryan have produced quite well you consider minutes played and both are 56% on faceoffs. Sutter’s goal totals are equal if you prorate them, but injury issues are a concern. Bjugstad is also a solid goal scorer, but not a great passer.
And some possession numbers from 2019-2021.
HDCF equals high danger scoring chance for.
PDO is combination of on-ice SH% and on-ice Sv%
Ozone% is % of time a player starts in offensive zone.
Glendening and Sutter don’t start very often in the O-zone and part of that is why their possession numbers are so low, but their possession numbers are a concern. Ryan has solid possession numbers. He is a smart skilled player and he’s excellent in faceoffs. Bjugstad has solid possession numbers, but he also played on playoff teams compared to some of the others. Having better teammates will help your possession numbers, but you also have to be a good enough player to play regularly on a playoff team.
Advertisement
Ad
Advertisement
Ad

Feb 8, 2020; Edmonton, Alberta, CAN; Edmonton Oilers forward Connor McDavid (97) controls the puck against Nashville Predators forward Nick Bonino (13) during the third period at Rogers Place. Mandatory Credit: Perry Nelson-USA TODAY Sports
Ideally, Edmonton gets a right shot centre because Leon Draisaitl, Connor McDavid, Ryan Nugent-Hopkins (when he fills in at centre), Jujhar Khaira and Ryan McLeod are all lefties. But I wouldn’t disregard Phillip Danault, for instance, just because he shoots left. Here are some left-shooting pending UFAs to consider. He is likely getting a bump from him current $3.25m salary, but how much?
Phillip Danault turned 28 in February. He’s been very productive at 5×5 the past few seasons. He has 101 points at 5×5 compared to 82 from RNH over the past three seasons. Danault is 55% on faceoffs and has incredible possession numbers despite a low percentage of offensive zone starts.
Paul Stastny turns 36 in December. He’s been a very solid point producer his entire career. He can play on your second line if you need him, but he’d be an excellent third line centre. He is solid on faceoffs, has played over 100 playoff games and is a very cerebral player and really studies systems and what the opposition is doing. He made $5.5m ($6.5m cap hit) this season with Winnipeg, and he won’t command that again. I’m curious what type of salary and term he will garner.
Advertisement
Ad
Advertisement
Ad
Nick Bonino just turned 33. He’s been a consistent 15-18 goal scorer and is reliable defensively. He won two Stanley Cups with Pittsburgh. He is a solid, consistent third line centre. Not flashy, but reliable.
Alexander Wennberg turns 27 in September. He had a bounce-back year in Florida with 17 goals and 29 points in 56 games. He did score 59 points in 2017, but that seems like an outlier at this point. He is a smart, skilled offensive player, but he is only 47% on faceoffs. He won’t solve the faceoff woes of the Oilers.
Casey Cizikas is 30 years old. He consistently outscores the opposition despite low offensive zone starts. He has 28 goals at 5×5 the past three seasons and his most common linemates in that time were Matt Martin and Cal Clutterbuck. They are a very effective line for the Islanders. He made $4m this season ($3.35m cap hit) so his price point might be too high.
Advertisement
Ad
Advertisement
Ad
Here are their 5×5 stats over the past three seasons:
Danault is best faceoff man and produced the most points. He also played with more offensive players in those seasons, but he earned his ice time. Cizikas and Bonino were very productive goal scorers in their time on ice.
Here are some possession numbers from 2019-2021.
HDCF equals high danger scoring chance for.
PDO is combination of on-ice SH% and on-ice Sv%.
O-zone% is % of time player starts in offensive zone.
Bonino outscoring teams despite only a 31% O-zone start is solid, while Danault’s possession numbers with his 40% O-zone start is really impressive. I don’t think Wennberg’s 55% O-zone start really matches a third line centre spot and I don’t see him as someone who can play second line centre on a strong playoff contender.
Advertisement
Ad
Advertisement
Ad
Danault would be a great UFA signing, even though he shoots left, but his price point might be too high for the Oilers to be serious contenders.
Whom do you like? Which center would you want Edmonton to sign?