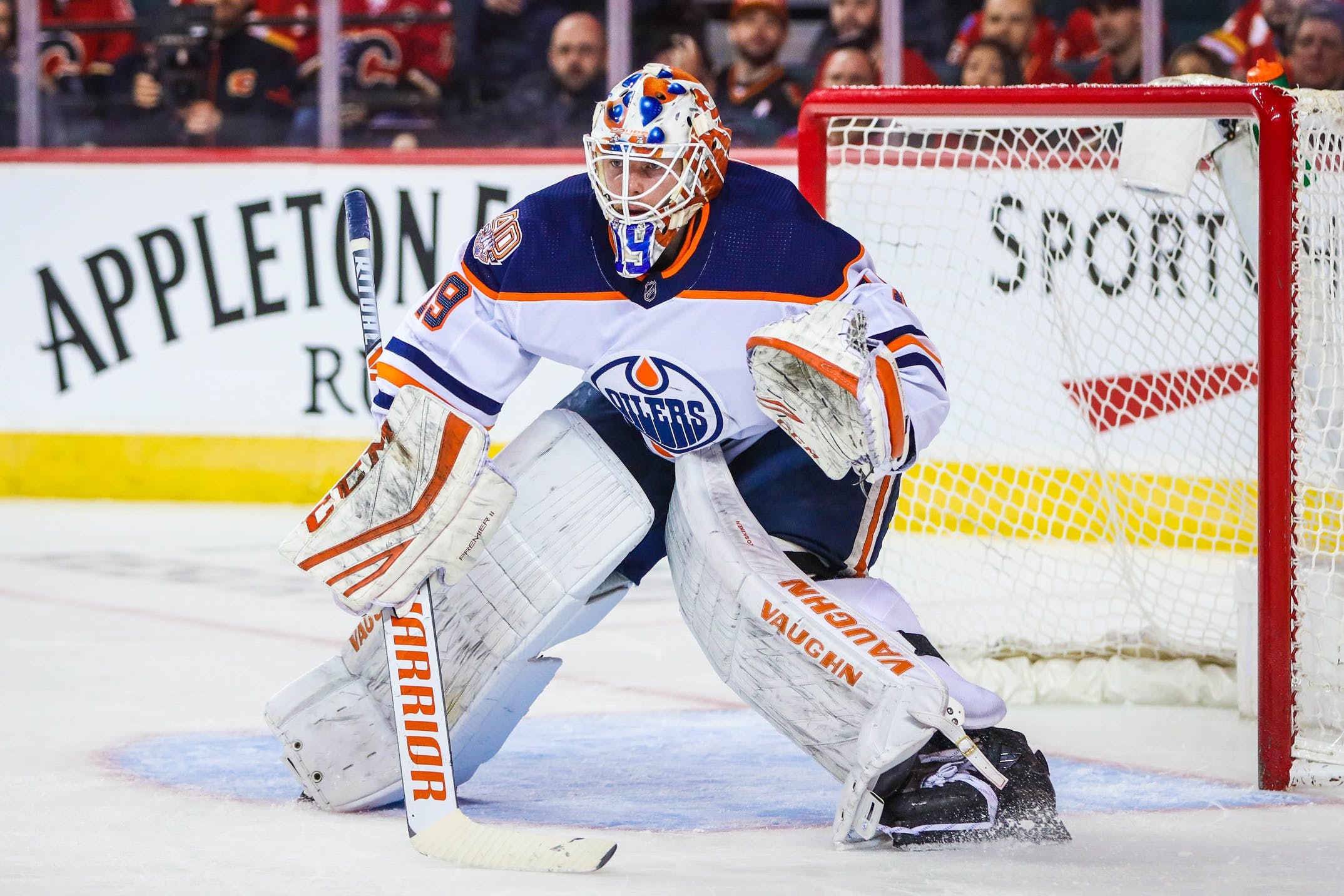 Photo credit: Sergei Belski-USA TODAY Sports
By Robin Brownlee
3 years ago
Comments
There exists a reasonable middle ground between freaking out about @Mikko Koskinen’s sieve-like performance in the @Edmonton Oilers’ 6-1 loss against the Vancouver Canucks at Rogers Place Thursday and making excuses for yet another game in which he simply wasn’t good enough. I’m doing my best to find it.
It’s difficult. After watching Koskinen give up four goals on 23 shots through 40 minutes before giving way to Shane Starrett, I’m leaning toward the former. Not because a pre-season game between watered-down line-ups means anything, but because we saw the same kind of performance from Koskinen too often in many of the 55 games he played last season.
There were a lot of players in the line-up coach Dave Tippett iced against the Canucks who didn’t show much, but the vast majority of those players, be they prospects who aren’t quite ready or fringe guys who’ll play most of their careers in the AHL, aren’t going to be here when the puck drops for real on Oct. 2. Koskinen will be here, sharing the crease with 37-year-old @Mike Smith, who is a wildcard after a tough season in Calgary. He’s been sick.
Advertisement
Ad
Advertisement
Ad
Given the swings in consistency we saw from Koskinen last season on the way to posting a record of 25-21-6 with a 2.93 GAA and a .906 save-percentage, he could very well stand on his head when he gets the net against the Calgary Flames tonight. That was the book on him last season. Great. Awful. It would be a lot easier for observers like me to find the middle ground if he’d find his.

WHAT’S IT GOING TO BE?

At 31 and at this point in his career, Koskinen isn’t a developing prospect. What we see is pretty much what we’re going to get. Can he tweak his technique? Sure. Major changes? I think not.
The thing is, I don’t expect Koskinen to be great – and the Oilers don’t need him to be to contend for a playoff spot – he just needs to cut down on the nights where it looks like he can’t stop a beach ball, like Thursday. The Oilers just need him to be good, more consistent. I wrote about his swings in performance here, so I won’t go over all of it again. I don’t think I’m alone in that.
Advertisement
Ad
Advertisement
Ad

It's pre-season. It doesn't count. It's only one game. Sure, but two goals on eight shots, both high glove side, on Koskinen. Come on, man.

I’m not fretting over the forwards and D; pre-season is for them to be sorted out, and especially this year with so many. But having one old goalie puking and another making me puke…after last season, definitely fretting.

Yup I said yikes too!!

Tippet, as you’d expect, wasn’t about to overreact to a listless effort in one mean-nothing game or Koskinen in his post-game availability last night. “First game,” said Tippett. “I’m sure there are some goals that he would like back, but it’s the first game. He’ll play again Friday.” Fair enough.

I honestly have no idea why Koskinen can look so good in some games and so bad in others. Some people suggested last season it would take Koskinen time to adjust to the smaller ice surface in the NHL. I won’t discount that as a factor, but it still doesn’t explain why he was so good on the new ice surface one game and so bad the next.
It’s also been said by those with a better handle on goaltending than me that Koskinen’s fundamentals need work. “So much of the game is about being in position, and being in position is not just about being in the middle of the net,” Kevin Woodley of InGoal Magazine told Mark Spector of Sportsnet last April.
Advertisement
Ad
Advertisement
Ad
“It really is about being set and square, and on most of the glove saves, he is neither set, nor is he square. Not all, but most. Your footwork is what allows you to beat those plays. You beat the play with your footwork. The faster you’re there the more time you have to pick up all the information. Is he passing? Is he shooting?”
Makes sense to me. The question I’d ask, though, is how does a goaltender make it to the NHL at all, not to mention get a three-year contract for $13.5 million, without a grasp of fundamentals like being square to the puck and footwork? I find that mind-boggling going into a season where the Oilers will have no chance, none, to contend for anything without better goaltending.
Advertisement
Ad
Advertisement
Ad
It goes without saying, or it should, that the penalty killing has to be better, that Tippett has to coax more balanced scoring from his forwards, that the team as a whole has to be better in front of whoever is standing in the blue paint and on and on. But none of that matters without better goaltending. Just stop the puck.