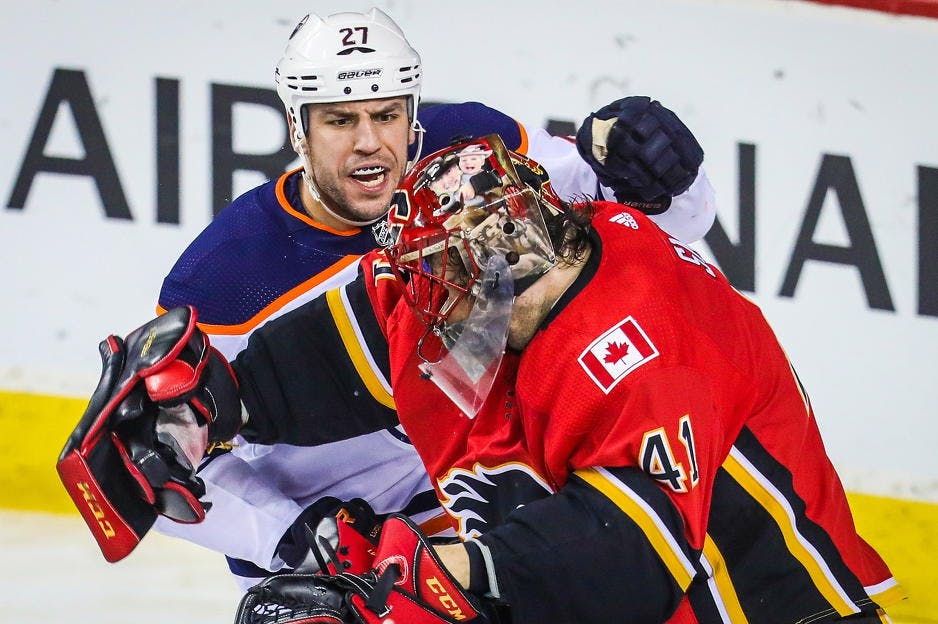 Photo credit: Sergei Belski-USA TODAY Sports
By Zach Laing
3 years ago
Comments
The Edmonton Oilers have made yesterday’s news official announcing the club signed 37-year-old goaltender Mike Smith to a one-year, $2-million contract.
Smith joins the Oilers after spending the last two seasons with the Calgary Flames.
With the club south on the QE2 for the past two seasons, Smith played in 97 games for the Calgary Flames winning 48 of those games. His .909 sv% during that time is a weird mix of one good season, and one terrible season.
In 2017-18, Smith posted a .916 winning 25/55 games played, while last season he drastically regressed posting a .898 sv% winning 23/42 games played.
At 37-years-old, he evidently isn’t getting any younger.
Edmonton bet big with signing Mikko Koskinen to a three-year, $4.5-million contract after he hit a mid-season hot streak. Truth be told Edmonton was going to need to big up someone who could help split games this upcoming season and Holland has hedged his bet with Mike Smith.
Advertisement
Ad
Advertisement
Ad

Mike Smith tells @Sportsnet that his relationship with Dave Tippett….Dallas, Arizona, Edmonton…was a key to signing with Oilers.#Signingseason

Now, the true question is, what are the Oilers going to get out of him. It’s clear he is no longer the .930 sv% goalie he was in 2011-12, but in the last seven seasons, he’s posted a .911 sv%; nothing spectacular, but nothing terrible.
His numbers were just under that for the last two seasons.
Edmonton is counting on him to provide numbers at least that good next season and I’m not sold the Oilers will get that. Smith, too, has a history of soft tissue injuries which is never a good sign as an aging goaltender.
Smith really did up his game for the Flames in the playoffs posting a .917 sv% in their five-game series against the Avalanche. Is it a sign that maybe he could bring that again this upcoming season?
Advertisement
Ad
Advertisement
Ad
One can only hope.
Am I sold on this signing? Not at all.
Were their other options for a stop-gap, one-year goaltender who does bring with him a veteran presence? No, I don’t think so.
One thing to note, however, is that Smith’s best season came in Arizona while Dave Tippett was patrolling the bench. There’s certainly a level of familiarity and comfort there which must’ve been heavily thought about as Edmonton looked into Smith’s signing.
On Twitter: @zjlaing