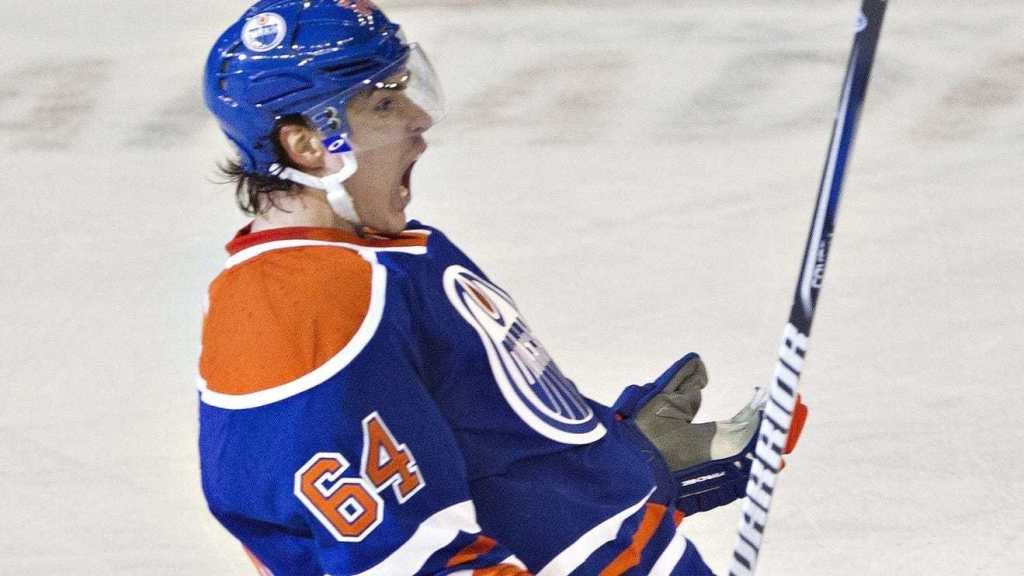 By Zach Laing
2 years ago
Comments
It’s far from a perfect website, but Twitter dot com has its moments.
For one it’s a great way for many likeminded people to get together and bond over their love of, well, pretty much anything. Anyone who is a fan of sports and has a Twitter account of their own has likely delved into the section of the website dedicated solely to that of Edmonton Oilers fans.
It’s a sub-section of the internet that I’ve been apart of since I joined the website in July 2009. Since then, things have largely been nothing short of tough for Oilers fans but in the same breath, there’s been some beauty in that darkness.
Last night I crowdsourced some of Oilers Twitter’s favourite moments and what will ensue will be a few weeks of some great memories.
First and foremost, the night Nail Yakupov broke the internet by sliding down the ice on his knees at Rexall Place.
Advertisement
Ad
Advertisement
Ad

The Edmonton Oilers season was young on January 24st, 2013. The lockout had reduced the year to only 48 games and entering his third game in the NHL, 2012 first overall pick Nail Yakupov had already got his first goal under his belt.
The LA Kings had paid a visit to Edmonton’s Rexall Place and it was a game that had nothing short of fireworks from early on in the game. Less than 10 minutes into the game, Jordan Nolan took a run at Jordan Eberle with a big hit and a near-intentional knee after making a pass. Ladislav Smid took exception and went after Nolan with the pair dropping the mitts. Oilers defenceman Mark Fistric got even more revenge on Nolan laying a massive open ice hit in the second.
Advertisement
Ad
Advertisement
Ad
Throughout the rest of the game, questionable calls and a lack of offence mired the match.
With seconds over a minute left in the third, the Oilers scored to tie the game — or so they thought. Ryan Nugent-Hopkins had shovelled the puck into an open net, but referees Tom Kowal and Greg Kimmerly said no goal well after the fact after much deliberation.
The outraged fans littered the ice with beer cups and nearly everything they could get their hands. And after a quick cleanup, back to hockey.
With under 10 seconds left in the third period and with the Oilers net empty, Taylor Hall slapped a bouncing puck on the Kings net from the point and Yakupov was there to bat it out of the air and into the net. The young, energetic Russian turned up the ice and slid down the middle of the Rexall Ice.
Advertisement
Ad
Advertisement
Ad

“Happiest moment ever,” said Yakupov, who said this trumped his first NHL goal Tuesday night in a 6-3 loss to the San Jose Sharks.
That time, Yakupov threw himself into the glass. In this one, he slid about 80 feeet after beating Quick.
“I knew there was 10 seconds left and I was thinking, if we win the faceoff, just go to the net and wait for the puck. Probably a little lucky.”
Yakupov’s celebration was spontaneuous. It’s not in his bag of tricks. He said it was the first time he’d done it.
“It just came to me. I didn’t understand what happened. I thought ‘what am I doing?'” he said.
Edmonton Journal, Jan. 25, 2013.

Sam Gagner went on to score the game-winning goal in overtime — a greasy goal at the side the Kings net — but the story was all about the rookie. Yakupov’s goal made headlines.
A photo of Yakupov sliding made the front of the Sports section in the following day’s Edmonton Journal, and it was nothing short of a goal many won’t soon forget.

I’d be remiss if I didn’t find some of the great tweets from that night, so enjoy this little look back in time.

Yakupov's celly… What do you think? -bm #Yakupov #Beauty

Today will be remembered as the day I fell in love with Nail Yakupov.

#Oilers And they called it…. pic.twitter.com/3jDj0BRv

Hockey is an Entertainment business. Yakupov's celebrations are entertaining. I dont care if its OT or an empty net. Love those Yak cellys

Yakupov does a Fleury? whaaaaat?????

Advertisement
Ad
Advertisement
Ad
For this year’s Blackout Collection, we’re introducing some new designs while also bringing back some old favourites as well. As for the new items, we launched a new hoodie, t-shirt, and toque that we’ve never done before and as you’ll soon see, these babies are sharp. In addition to the new designs, we’ve also relaunched the black-on-black logo hoodie as well as the classic Nation Hat (both flat brim and dad style) with the same esthetic from a few years ago. These two items were huge sellers back in 2016 and after hearing your feedback about wanting us to bring them back, that’s exactly what we did. But be warned, these items are all limited edition and once they’re gone they’re gone, so I’d recommend squashing your internal desire to procrastinate to make sure you get all of your Christmas shopping done before everything sells out. Check out all of the Black Friday deals here.