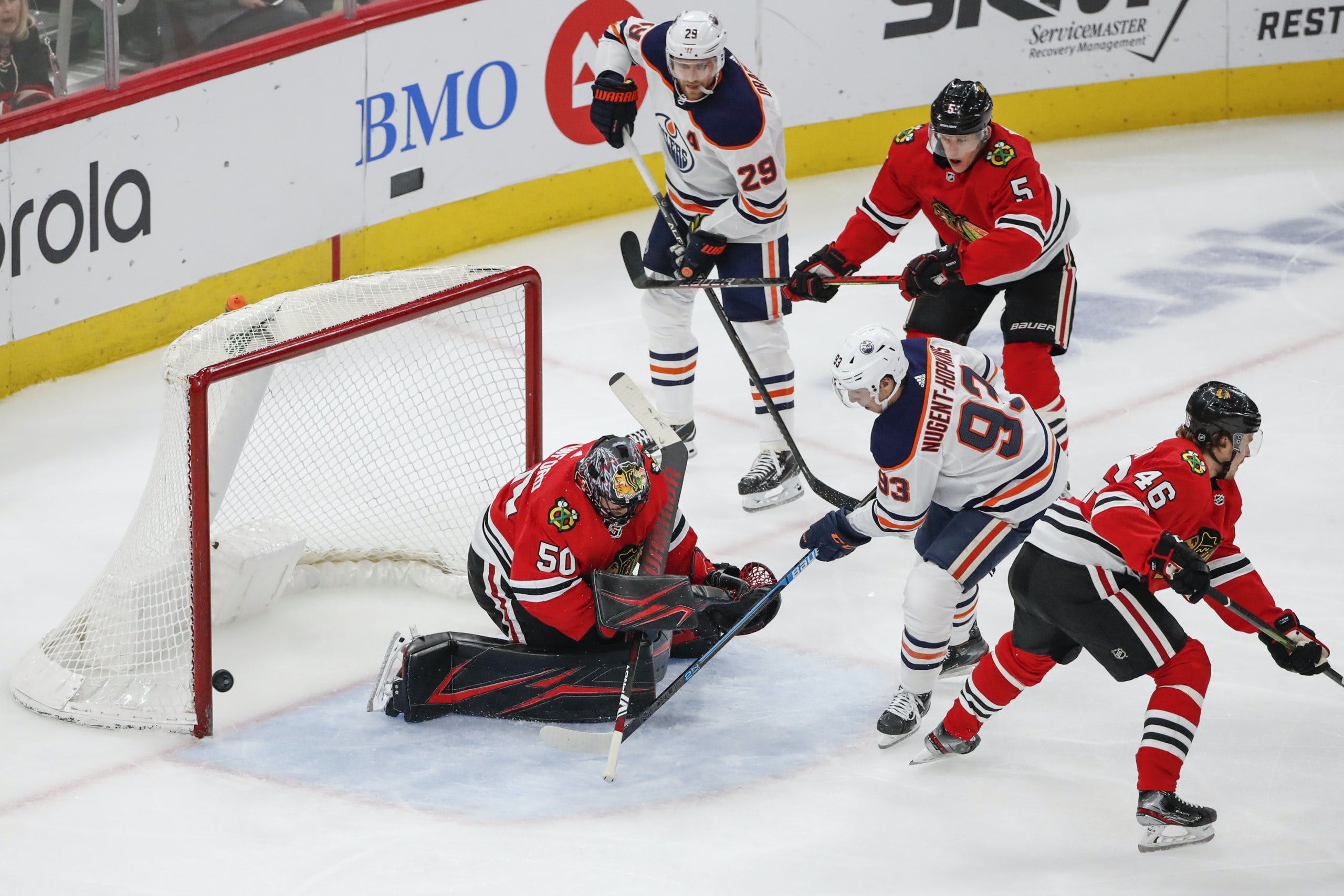 Photo credit: Kamil Krzaczynski-USA TODAY Sports
By Jason Gregor
2 years ago
Comments
The NHL salary cap will not be increasing for the first time since the 2013/2014 season. And a source told me, “I think it could be a flat cap for four seasons, not just two.”
Right now, close to 75% of the NHL’s revenue comes from having fans in the stands, via tickets and food and beverage. The uncertainty of when fans will be able to return to buildings, and how many, is a huge concern among NHL owners, presidents and general managers.
Many general managers have been told they will have an internal salary cap that is lower than the cap ceiling of $81.5 million, and this could last up to four seasons.
Yesterday, when I wrote about what Ryan Nugent-Hopkins’ next contract could look like, many of the replies felt he had to get a raise and was easily worth over $7 million. In February, I’d have agreed with that premise, but the financial landscape of the NHL has changed drastically since then.
A flat cap for two years is much different than a flat cap for four, and the uncertainty of the future has many owners instructing their GMs to be much more prudent with their spending.
Advertisement
Ad
Advertisement
Ad
For the past seven seasons, when a GM signed a player to a new contract, they did so with the expectation the salary cap would increase every year. But that isn’t the case now, and the ramifications for free agents this year, and in the next few seasons, will be very noticeable.
Here’s a quick look at the salary cap since Connor McDavid entered the NHL in 2015/2016.
2015/2016: $71.4 million
2016/2017: $73.0 million
2017/2018: $75.0 million
2018/2019: $79.5 million
2019/2020: $81.5 million
2020/2021: $81.5 million
In four years the salary cap went up $10 million. That’s $10 million per team, and although not every team spends to the cap, many are very close, so that is a massive amount of new money each year.
Now imagine the next four seasons have no salary cap increase. There is only so much cap space, and players who sign first have a better chance of getting more money, and that’s why we are going to see many RFAs not receive qualifying offers this coming week. Teams will be trying to sign them at a lower figure.
Advertisement
Ad
Advertisement
Ad
On March 4th, the NHL expected the 2020/2021 salary cap to be between $84-$88 million.

Bill Daly says he gave GMs a salary cap projection today for next season: the cap will be anywhere from $84 million to $88.2 million. The exact figure will be negotiated with the NHLPA.

It was going to increase by at least three million, and possibly as much as $6.5m.  The cap hasn’t increased by over $6 million in a season since it went from $50.3 million in 2008 to $56.7 million in 2009. Let’s split the difference and say if COVID didn’t happen, the 2021 cap would be $86 million, an increase of $4.5 million.
Using a low projection of $2 million in each of the following three seasons, here’s how the salary cap would have looked.
2020/2021: $86 million
2021/2022: $88 million.
2022/2023: $90 million.
2023/2024: $92 million.
That’s much different than what teams are facing now. The cap is flat this year, will be next year and it might be flat for four seasons. So instead of having $90 million to spend in 2022/2023, a team has $81.5m. A significant difference.
Advertisement
Ad
Advertisement
Ad
Pre-COVID, Ken Holland could have signed @Ryan Nugent-Hopkins to a $7m AAV. Which would have been fair considering Brayden Scheen and Chris Kreider recently signed for $6.5m.
But now, if he signs Nugent-Hopkins to that contract, with a potential four-year flat cap, he has much less room to fill out his roster. More important pieces, like Nugent-Hopkins, will take slightly less that what they expected to sign for last March, and bottom six forwards and third pairing D-men might see an even bigger decrease in their salary.
While RNH’s cap hit might go down from $7 mill to $6.5 mill or $6m, a player like @Andreas Athanasiou is likely going to see his $3m salary decrease closer to $2m. That is a 33% decrease, compared to a 7% or 14.2% decrease for Nugent-Hopkins. And that doesn’t include the 20% Escrow that is locked in for this season. And the following years where it will be 14-18% in 2021-22, 10% in 2022-23, and 6% in 2023-24, 2024-25 and 2025-26.
Advertisement
Ad
Advertisement
Ad
The reality of a flat cap is most pending free agents are going to take less than players who signed in the previous few seasons. When those players signed, the GM and agent did so knowing the salary cap would increase and a $7 million player at the start of the 2017/2018 season made up 9.3% of the total cap. With safe projections, that same player would only make up $7.5% of the cap six years later.

I don’t think it is fair, in normal circumstances, to compare the business of a pro sports team to businesses in oil and gas, hospitality, accounting firms etc. No one is paying to watch us do those jobs. However, in an economic downturn, many businesses and employees face the reality of a wage rollback.
Advertisement
Ad
Advertisement
Ad
Many people have lost their jobs already due to COVID. Others are working fewer hours, and some are doing the same job, but with a 10-20% pay cut. Those workers aren’t suddenly less qualified for their job, or less important, but it is simple economics. If your revenue drops, you have to cut costs, if you want your business to survive. The NHL is no different.
Some NHL players will take pay cuts. Others won’t be getting the raise they expected, as recently as March 4th, and it isn’t because they are suddenly less skilled or valuable to the team.
It isn’t personal. It isn’t a reflection of their value to the team. It is simply the financial realities of the NHL.
It doesn’t mean every player will encounter this. The Montreal Canadiens signed @Jeff Petry to a four-year extension, that doesn’t begin until the 2021/2022 season and he got a $750,000 raise. That is great for him, but I think he is going to be the exception.
Advertisement
Ad
Advertisement
Ad
Free agency begins next Friday, and I’m fascinated to see what the salaries and term players sign for. Will teams and players be less likely to lock in long term with so much fiscal uncertainty? Or will some players take less, to get more term and have cost certainty?