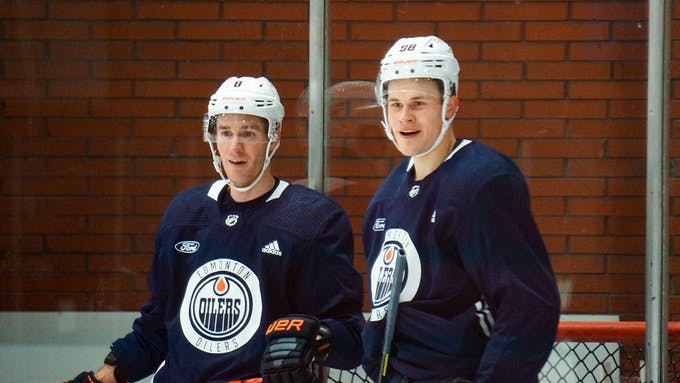 Photo credit: twitter.com/edmontonoilers
By Zach Laing
2 years ago
Comments
Four Edmonton Oilers players have been deemed unfit to play at the start of training camp.
The four players listed were forwards Dominik Kahun, James Neal, Gaetan Haas and Devin Shore. Jason Gregor previously reported Haas is still quarantining, while the status of the other three is unknown.
Edmonton kicked off their formal training camp Monday after a Sunday afternoon skate and we got our first look at the Oilers lines and defensive pairings.
Ryan Nugent-Hopkins skated on the alongside Connor McDavid and Zack Kassian, while Leon Draisaitl centred Tyler Ennis and Kailer Yamamoto flanking him.
Kyle Turris centred Josh Archibald and Jesse Puljujarvi, while Jujhar Khaira centred Joakim Nygard and Alex Chiasson.
Darnell Nurse and Ethan Bear skated together, while Kris Russell and Tyson Barrie together. Caleb Jones and Adam Larsson skated together.
There were many other players, of course, who filled in the extra line and d-pairing spots, too, which can be seen in the following Jason Gregor tweet.
Advertisement
Ad
Advertisement
Ad

These are the two groups skating today for Oilers. Group 1 hits ice at 10a.m. RNH starts with McDavid, not a surprise.
Haas, Neal, Shore and Kahun listed as unable to skate. pic.twitter.com/9SqK0fCpyu

Here are some tweets from Oilers media members who were at the skate at NAIT Monday.

Jesse Puljujarvi, first practice with the @EdmontonOilers since February of 2018. pic.twitter.com/CnMTNXcgEK

Fun being back in the rink @NAIT where my broadcasting career began. McDavid and RNH look in mid season form. McDavid looks quicker, if that is possible. Remember he was able to train without rehabbing for the past 10 months. pic.twitter.com/oXyMoaDrqr

Getting that conditioning in at the end of the session. pic.twitter.com/d5S7uI7EGT

Back to work. #Oilers #NHL pic.twitter.com/aFEWEtZQMQ

Between the mask and hockey noise tough to hear but @EdmontonOilers camp is underway… pic.twitter.com/H4xX3iP6v9