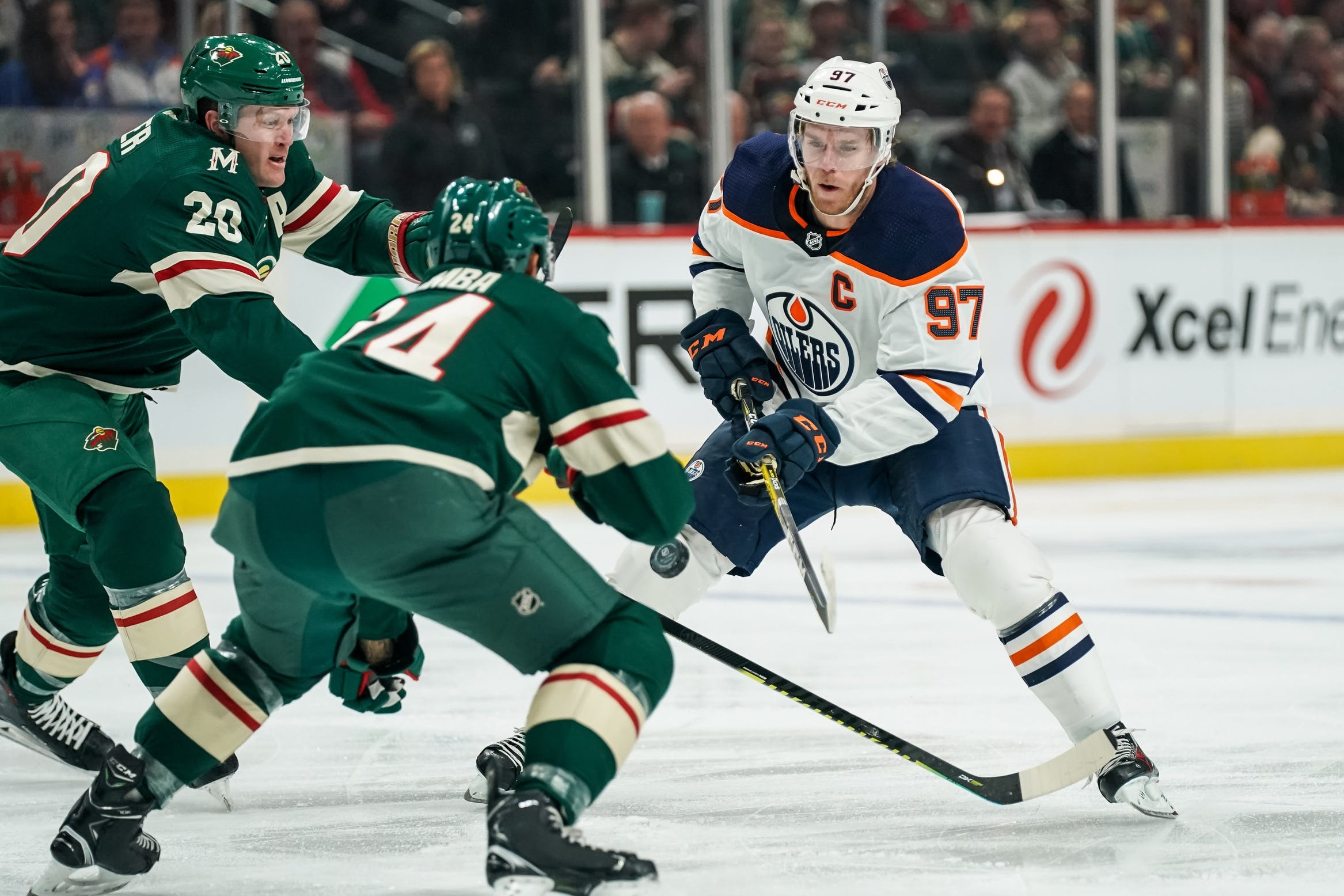 Photo credit: Brace Hemmelgarn-USA TODAY Sports
By Jason Gregor
1 year ago
Comments
Bill Guerin played 1,263 regular season NHL games. He played 140 in the playoffs, won two Stanley Cups and he won gold at the 1996 World Cup, but his greatest achievement in hockey might be how he’s transformed the Minnesota Wild.
For 20 years the Wild were arguably the most boring franchise in the NHL. They began as a defensive-minded team, who were dreadful to watch, but since Guerin took over he’s made some bold moves and the Wild are not only competitive, they are exciting to watch.
Guerin’s done the impossible. He’s made the Wild appointment viewing.
— Minnesota skates into Edmonton with the best points% and most points in the Western Conference. They are third in goals scored averaging 3.71 per game, just ahead of the Edmonton Oilers who are fourth at 3.65. The Wild do not play a boring, defensive-minded, left-wing lock, clog up the neutral zone game. They attack. And they attack in waves.
— The Wild are 17th in goals against/game at 2.92, while Edmonton is 21st at 3.04. How they score and allow goals is different. Edmonton has the best PP in the NHL at 34.3%, while Minnesota is 28th at 13.9%. Edmonton’s PK is sixth (despite allowing three goals on Connor McDavid’s major penalty late in Sunday’s loss to LA), while Minnesota is 18th.
Advertisement
Ad
Advertisement
Ad
— The Wild are second in the NHL in 5×5 goals with 63. Edmonton is 14th at 48. Minnesota is 18th in 5×5 GA allowing 47 and Edmonton is 24th allowing 54. Edmonton will need to be much more aware defensively at 5×5 tonight or Minnesota could run Wild (hi Gene) tonight.
— The Wild currently have 15 players on pace for 24 points at 5×5, which is ridiculous depth. When Tampa Bay led the NHL in 5×5 goals in 2019 (the last full NHL season), they had 12 players with 24+ points at 5×5. The Wild have four D-men and 11 forwards with seven+ points at 5×5.
— Alex Goligoski (12), Dmitri Kulikov (10), Jon Merrill (8) and Jonas Brodin (7) are producing from the blueline at 5×5. Matt Dumba has six points.
Advertisement
Ad
Advertisement
Ad
— And right now they are getting production from all four lines at 5×5.
Kirill Kaprisov (21)  — Ryan Hartman (17) — Mats Zuccarello (10)
Jordan Greenway (7) — Joel Eriksson Ek (8) — Marcus Foligno (9)
Rem Pitlick (10) — Victor Rask (7) — Kevin Fiala (9)
Brandon Duhaime (7) — Nico Sturm (6) — Nick Bjugstad (3)
Frederik Gaudreau has seven points, but he’s missed the past three games with injury.
— The Wild have a great mix of skill, speed and size among their forward groups. The Ericksson Ek line is huge and Foligno and Greenway use their size regularly. Zack Kassian needs to pay attention to how they play. He needs to play with the same energy as they do on a more regular basis, not just every few games.
Advertisement
Ad
Advertisement
Ad
— Edmonton has nine players on pace for 24+ points at 5×5. They also have Cody Ceci and Darnell Nurse who have the same (.29 pts/game average) that would equate to 24 points in an 82-game season. So you could argue they have 10 in the lineup tonight.
Leon Draisaitl (19), McDavid (17), Jesse Puljujarvi (12), Zach Hyman (10), Evan Bouchard (9), Ryan Nugent-Hopkins (8), Warren Foegele, Tyson Barrie, and Kassian (7).
Edmonton’s overall offence at 5×5 hasn’t been awful. It can be better, but it is their goals against at 5×5 that is their main nemesis. They are allowing 2.34 goals/against per game. I wrote at the start of the season this was the main area they needed to improve, yet this year it is even worse. They were 2.07 GA/game last year, after being 2.18, 2.14 and 2.16 in the previous three. Until the Oilers can be more consistent defensively at 5×5 they won’t be considered a legitimate top-tier team.
Advertisement
Ad
Advertisement
Ad
— I keep reading they don’t have offensive depth. I disagree that offensive depth is their problem. Their third line produces enough. Yes, you’d want more from the fourth line, but they won’t produce much playing limited minutes. The main issue is how many goals they are allowing at 5×5.
Look at their GF-GA among bottom six.
Derek Ryan has been on for 5.4 GA/60.
Foegele 3.84
Kyle Turris 3.72
Kassian 3.58
Colton Sceviour 3.38
Tyler Benson 3.15
It isn’t good.
Ryan McLeod is at 2.21, which is second best among forwards behind Draisaitl’s 2.18, and Brendan Perlini is tied for fifth with Zach Hyman at 2.48.
— But even many of their top players aren’t killing it at 5×5 GF-GA either.
RNH is 15-12, Hyman  is 13-13 and Kailer Yamamoto 14-15.
Kassian is 11-14
Foegele is 9-17
Ryan is an ugly 3-16. He is getting crushed.
Sceviour is 1-6.
Benson is 1-4
Brendan Perlini 0-4.
Advertisement
Ad
Advertisement
Ad
McLeod is treading water at 5-5. Decent for a rookie.
— But this team’s major weakness is allowing goals 5×5. Either they aren’t good enough, or the system needs to be adjusted. Maybe it is both, but they are showing no signs of improvement. And that is what the coaching staff needs to address.
— After starting the season with zero goals in eight games, Kaprisov has nine goals in his last 16 games and he has 11 points in his previous five. He is now fifth in league scoring. Marian Gaborik holds the Wild franchise record for most points with 83 in 2007-08. Kaprisov is on pace (99 points) to shatter that. Gaborik finished 12th in league scoring that year, which is also the highest a Wild player has ever finished. Kaprisov could break that record as well. Guerin went all in on Kaprisov and it is paying off.
Advertisement
Ad
Advertisement
Ad
— Guerin has been very bold and not afraid to make moves and it has paid off. This might be the year the Wild go for it, because next season they have $12.7M in dead cap space due to the Zach Parise and Ryan Suter buyouts, and then it is $14.7m in 2023-24 and 2024-25. Guerin has worked his magic to make the Wild entertaining. I’m curious to see what he has up his sleeve to keep them competitive for the next three years with all the dead cap space. If they are still good, he should be in the running for GM of the year in all three seasons.

Thanks to Trevor for his great bid on the Chop dinner package. Much appreciated.
DAY SIX:
Package #1: Whisky and Hockey Lovers Package from PWS Imports and Drams4Fams charity
Advertisement
Ad
Advertisement
Ad
Package #2: Golf and Driver
You can bid by listening to TSN 1260 and calling 780.444.1260 or text 101260 between 2-6 p.m. today. All proceeds will help out Santas Anonymous.