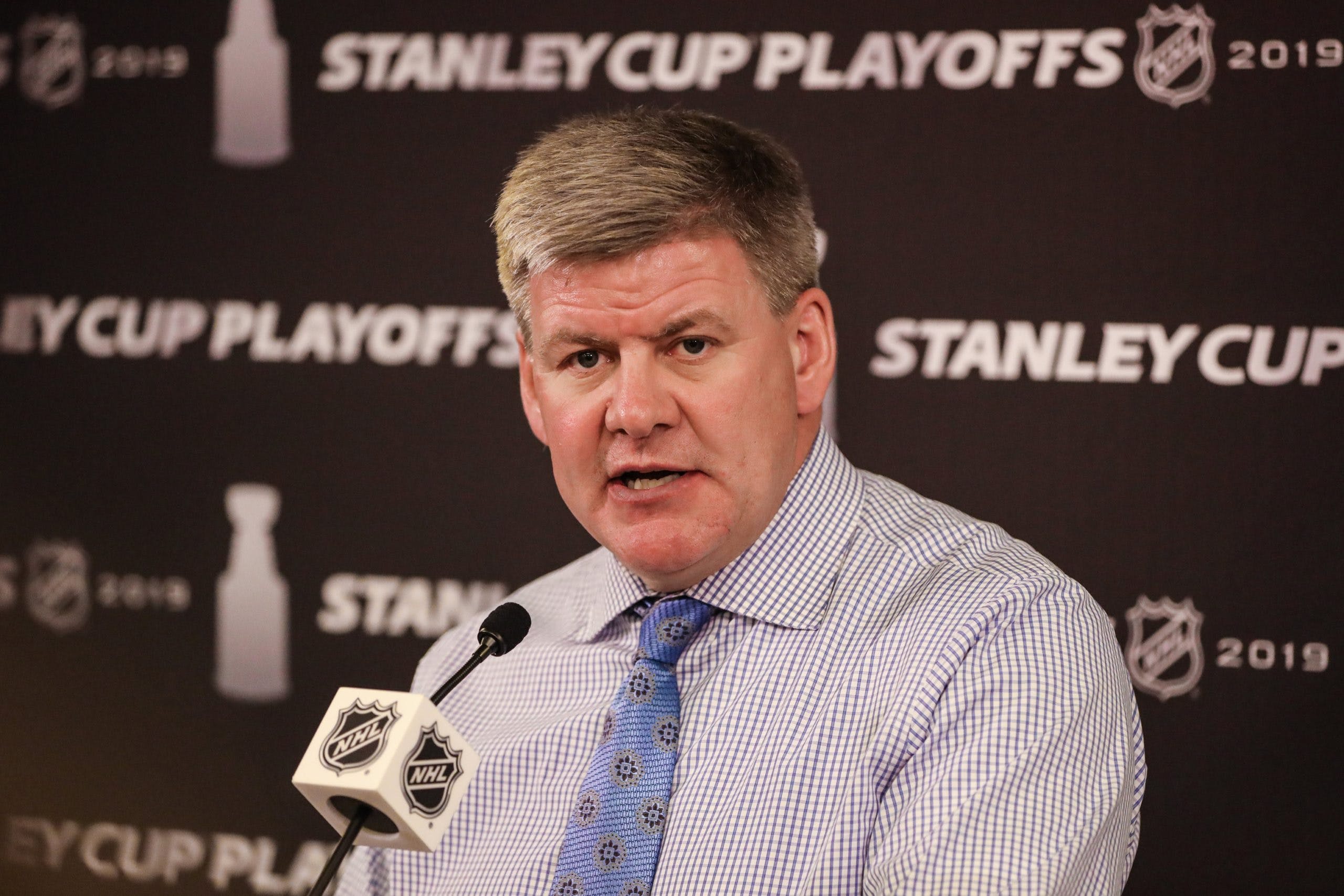 Photo credit: Sergei Belski-USA TODAY Sports
By Jason Gregor
3 years ago
Comments
Coaches at any level of sports can have a major impact, both positively or negatively, on your sporting journey. I was lucky. I never had a horrible coach. I quit peewee hockey because I didn’t enjoy my coach at that age. He was too competitive, but he coached me again in Midget, and then I was more competitive and I liked him. It is important to recognize not every player will respond positively to every coach. It might depend on your competitiveness at the time, or how the coach communicates, but with the Mike Babcock/Mitch Marner story and now the Akim Aliu/Bill Peters story, I think the days of coaches abusing their power is coming to an end.
It is about time.
I still believe the vast majority of coaches are very good and bring far more positive angles to sports than negative. I don’t like hyperbole and people wanting to overreact to a few bad situations, and focus more on the negative stories that will come out and forget about all the great coaches. Because there are many of them, and I applaud those who have helped make many boys and girls better players, and, more importantly, better human beings.
However, we can’t overlook those who abuse their position.
Babcock asking @Mitch Marner to list the players from hardest worker down to least hardest was a clear case of abusing his power. Marner was three months into his NHL career. He wasn’t experienced enough to know what legit NHL work ethic was, but he was smart enough to put himself at the bottom of the list. For Babcock to then show that list to his teammates was awful. The sad part is that somehow he thought this was a good idea. Did he want his players not trusting each other and felt that would make them better?
Advertisement
Ad
Advertisement
Ad
I believe there is a big difference between an error in judgment and abuse of power. This was a clear case of the latter. We all make errors in judgment, but this wasn’t one. It was a tactic to invoke fear and show the team the coach holds the power.
Now, it wasn’t the reason Babcock was fired. Terry Koshan mentioned the story after Babcock was let go, and Marner never spoke about it until afterwards as well. Many will ask why?
The coach, in any sport, has a lot of power. They control who plays and how often. Good coaches don’t abuse this, and I want to repeat I think there are far more good coaches than bad ones. Too often when stories like this come out people lump everyone in one category. They make horrendous generalizations and that isn’t right.
Advertisement
Ad
Advertisement
Ad
The Aliu/Peters story is different. Frank Seravalli from TSN spoke to Aliu after his tweets last night. You can read Seravalli’s piece here.
Aliu explained his version of what occurred during the 2009/2010 season.
“He (Peters) walked in before a morning pre-game skate and said ‘Hey Akim, I’m sick of you playing that n—– s—,’ ” Aliu told TSN, with Peters, who was then the Ice Hogs head coach, referring to Aliu’s selection of hip-hop music. “He said ‘I’m sick of hearing this n—–s f—— other n—–s in the ass stuff.’
Seravalli reached out to some of Aliu’s teammates who confirmed the story.
The racial epithet from Peters in unacceptable. No question. I can see him not liking that style of music and feeling the lyrics aren’t appropriate in the room, but he should have just said it that way. Using the N word was awful.
Advertisement
Ad
Advertisement
Ad
Calgary Flames GM Brad Treliving addressed the media this morning from Buffalo.
“Bill has not been relieved of his duties. We are continuing this ongoing investigation right now. The serious nature of this is not lost on us, we take it with extreme seriousness,” said Treliving. I respect the fact he didn’t make a rash decision. He wants to do a thorough investigation. I applaud that, but I’d be surprised if Peters is retained as head coach.
Former @Carolina Hurricanes player Michal Jordan tweeted this earlier today.

1) Never wish anything bad to the person but you get what you deserve Bill.After years making it to the NHL had experience with the worst coach ever by far.Kicking me and punching other player to the head during the game…

2) then pretending like nothing happened…couldnt believe my eyes what can happen in the best league.. happy that i dont have to go thrue that stuff on daily basics anymore.

Treliving likely will have to look into these allegations as well.

For me, the bigger problem in hockey is those who enable coaches who abuse their power. That includes anything from a minor hockey association continuing to allow an overbearing coach to stay behind the bench because the Novice, Atom, Peewee, Bantam or Midget director is friends with the coach, or in junior hockey or the NHL, where management hear the stories, but do nothing to stop them from occurring.
Advertisement
Ad
Advertisement
Ad
The challenge is coaches who abuse their power behind the bench, can still do good things in the community or away from the rink. It is possible to be both. You can help out charities or small foundations when you aren’t coaching, but also be a power-hungry jerk when you put the whistle around your neck. The good aspects of their personality shouldn’t give them free reign to be abusive coaches.
The enabling of abusive or power hungry coaches needs to stop. But it won’t be easy. It has been around a long time, and many players and families are afraid to speak up out of fear they will be labelled a trouble maker. I’d like to believe a hockey association would do a proper investigation and believe a boy or girl when they complain, but history tells us that isn’t the case. Ask Theo Fleury or Sheldon Kennedy. It is an extreme case, but Graham James was allowed to roam free as a predator for many years while people kept the eyes closed and their mouths shut.
Advertisement
Ad
Advertisement
Ad
The gymnastic documentary At The Heart of Gold: Inside the USA Gymnastics Scandal was extremely difficult to watch. It outlined the disgusting and vile actions of how Larry Nasser abused numerous young girls over decades under the watch of USA Gymnastics. When the girls complained, adults — both male and female who were in positions to protect the girls — didn’t listen. Even a father, who was friends with Nasser, didn’t believe his daughter. He later committed suicide as he couldn’t forgive himself. It was very sad, but it illustrates how many people will blindly trust someone in power when it comes to sports and the potential for a child or young adult to further their career.
Coaches who abuse their power are awful, but the management or associations who allow it to go on when told about it are equally guilty. Stop enabling these coaches.
Advertisement
Ad
Advertisement
Ad

Mitch Marner said this in regards to other players experiencing similar situations: “If people want to share their stories, do it. If they don’t want to hold it in, it’s your story to tell.”
I agree with Marner, but it is also important for people to ensure their story is factual. Over the past 15 years I have received many emails from parents wanting me to discuss a coaching situation. I respond with an email explaining as long as they are willing to provide me with the coach’s name and phone number, and names of teammates who can corroborate the story, I will. It is important to get all sides of the story.
There is a big difference between you not liking a coach, and that coach abusing his power. Maybe the coach is the jerk they say he is. If he is, then please email me [email protected] and I will gladly look into it. However, sometimes the player isn’t as good as his or her parents think. Maybe they don’t work hard enough. We need to recognize the difference.
Advertisement
Ad
Advertisement
Ad
I encourage everyone to make sure the story is about an abuse of power or serious matters like racism or bigotry.
I think Marner and Aliu speaking up will encourage others to do so, and I’m certain there are coaches, at all levels of hockey, and across all sports, who coach using fear or intimidation tactics who are likely feeling a bit on edge today, because players are starting to speak out.
As these stories come out and we discuss them, I do hope we don’t forget all the great coaches, because I believe there are more good ones than bad ones.