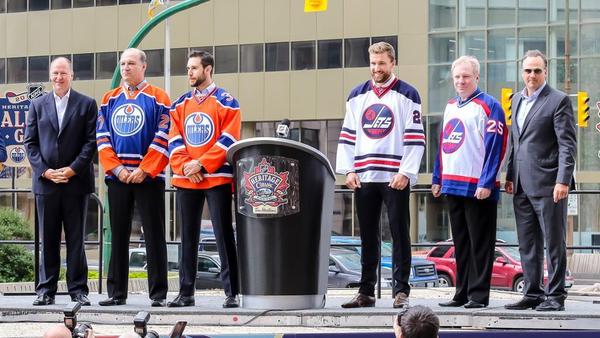 nhl.com
After initially being announced in March, the Oilers and the Jets released some more info regarding the impending 2016 Heritage Classic that will see the teams face off on Sunday, Oct. 23 at Investors Group Field in Winnipeg.

As pictured at the top of the page, the Oilers will be wearing their current alternate jerseys, while the Jets will don some fancy new threads specifically designed for the event. Upon the event’s announcement, I was excited by the thought of the Oilers designing some new gear for the event.
While they did just reveal their third jerseys last year, which are a throwback to the 1972-1973 inaugural WHA season, I thought it would be a nice touch to at least change up the colour scheme. At the very least, they could’ve went with something a little less generic in order to sell some new jerseys. Who doesn’t like having more money in their pockets?
Advertisement
Ad
Advertisement
Ad
Fellow Oilogosphere writer Ryan Batty had a nice suggestion this morning, which I thought would’ve looked great.

I’ve got my fingers crossed for the Oilers wearing something very close to these at the Heritage Classic. pic.twitter.com/PPnaBliA7Z

None the less, the Oilers decided to keep with their aforementioned current third jerseys. On the other hand, the Jets have come out with a gorgeous design paying homage to their days spent in the WHA.

The Oilers and the Jets squared off in the final WHA game ever on May 20, 1979. It was on that day the Jets beat the Oilers 7-3 to take home the AVCO Cup title.

Advertisement
Ad
Advertisement
Ad
One thing the Oilers did do right is pick a very solid roster. As one would expect, the list features nearly every impact player from the Oilers heydays of the ’80’s from Gretzky and Messier to Coffey and Kurri.
For someone like myself, who was never around to witness the greatness that was, it is a great touch to see both Ryan Smyth and Dwayne Roloson be added to the list. In his four seasons with the Oilers, Roli the Goalie cemented himself as one of the organization’s best goaltenders.
In goaltenders that played over 100 regular season games with Edmonton, Roloson ranks second in save per cent (.909, second to Devan Dubnyk’s .912) and third in goals against average (2.78). He also played the fifth most games as a goaltender for the team. Source.
Advertisement
Ad
Advertisement
Ad
As any Oiler fan would know, Roloson was a key cog in the Edmonton Oilers trip to the 2006 Stanley Cup Finals. To this day, I firmly believe the Oilers would have been cup champions if it wasn’t for his injury in the finals. *curses MAB forever*
Captain Canada, Ryan Smyth, is also a great addition to the group. I’d love to see him line up alongside Gretzky for a few shifts.
The Jets alumni lineup can be viewed on their website, but features greats such as Teemu Selanne, Dale Hawerchuk, Teppo Numminen and “Good night” Jim Kyte.

Frankly, I’m incredibly excited to watch both the alumni game as well as the actual Oilers vs. Jets game. I remember the first winter classic in 2003 that saw the Oilers and Canadiens take to the ice, and it will be great to see this event happen again. After all, the Oilers are the grandfathers of outdoor games in the NHL.
Advertisement
Ad
Advertisement
Ad
Prediction: Oilers alumni win 8-6, Oilers beat the Jets 100000000-0.