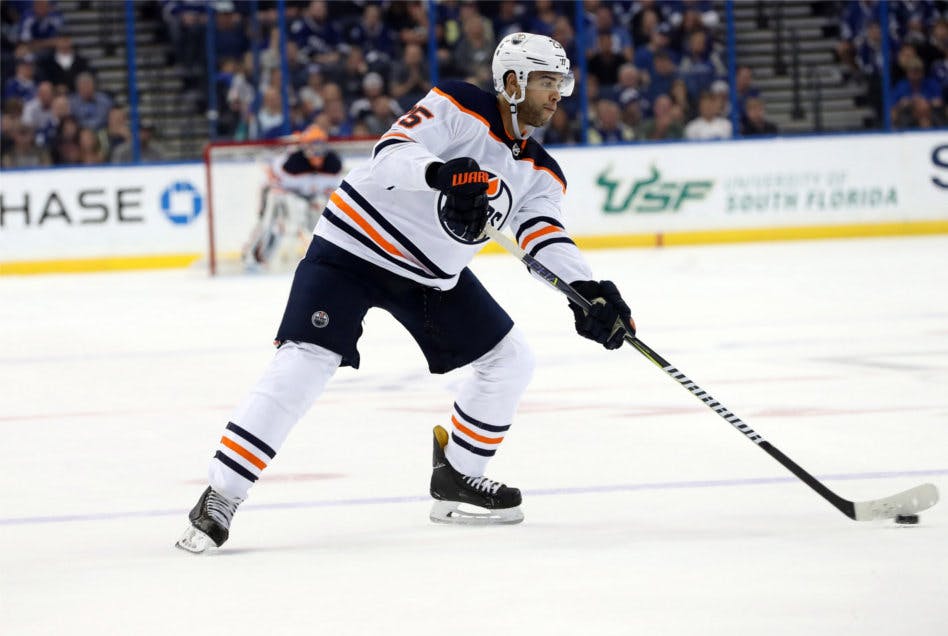 Photo credit: Kim Klement-USA TODAY Sports
By baggedmilk
3 years ago
Comments
With the Oilers picking in the 8-hole on Friday night at NHL Draft, I thought it would be interesting to take a trip down memory lane and look at the players selected between 6-10 in past draft years to see if we can learn any lessons about what type of players gets picked around that slot. Today, our series takes us back to the 2013 NHL Draft.
For today’s countdown, I decided to change things up a little bit by going back to 2013 instead of continuing on with the 2017 draft class. As I was looking at the players chosen in 2017, I figured that there weren’t many that are actually up and running in their NHL careers quite yet so it made more sense to step back in time. To me, it didn’t make a lot of sense to look at kids that haven’t had the time to work their way to the NHL and use them as potential comparables for what might happen with the Oilers. With that in mind, I decided to take a journey back to 2013 to see how the players taken in our range have progressed in the six years since draft day.
Advertisement
Ad
Advertisement
Ad

Sean Monahan is the top-ranked OHL forward for the upcoming 2013 NHL Entry Draft and it is for good reason as he brings the complete package of size, skill and hockey intelligence that teams search for in franchise players. Projected to be a top-5 pick in June, Monahan is off to a strong start (7 points through 4 games) in his draft year. He is a smooth skating big-bodied forward that has a real knack for finding open areas. Monahan excels in puck possession and can unload his hard accurate shot at the drop of a dime. He’s a responsible player on both sides of the puck and will be counted upon in all situations as he is mature beyond his years. While some draft prospects will fade and dwindle, Monahan’s consistency and complete game should keep him in discussion for a top-5 selection all season long.

I remember Sean Monahan being a guy that was linked to the Oilers a lot that spring, and I remember hating the fact that the Flames were able to grab him one spot ahead of us. As we’ve seen in the years that followed, Monahan has developed into a very consistent scorer for the Flames and it’s endlessly annoying to anyone that cheers for the team up the road.

Nurse has great size at six-foot-four and 185 pounds with great mobility. His offensive game really took off in his second season, improving from his 10-point rookie season to 41 points as a sophomore. Nurse’s confidence grew in his ability to rush the puck up ice, though despite the numbers, he’s not a natural point producer. He plays a sound, calculated defensive game thanks to his long wingspan and competitiveness. Nurse should develop into a stud shutdown defender.

As we know about defencemen, it can take some time for these guys to really hit their stride and that’s what we saw with Darnell Nurse in 2018-19. In 82 games played with the Oilers last season, Nurse set a career-high in goals, assists, and points while averaging 23:49 in all situations, making him one of the most heavily used blueliners on the roster. Considering the need the Oilers have for defencemen that can actually play and put up points, I think we can say for all of us that we have to hope Darnell Nurse keeps progressing in the direction he has.
Advertisement
Ad
Advertisement
Ad

One of the best defensemen of his age group, Ristolainen was a top-prospect for the 2013 NHL Draft. He is a calm player with good two-way ability and a mature style of play, though his defensive awareness and positioning still need work. More mobile and offensive than Buffalo’s other 2013 1st round pick Nikita Zadorov, Ristolainen moves the puck with confidence, has a good shot from the point and has displayed ability to work the powerplay in SM-liiga. Ristolainen has an NHL-ready frame and has gained a lot of strength while playing in SM-liiga and though he is not a big-time hitter, he feels comfortable playing the body and likes to get physical in front of the net.

Rasmus Ristolainen is an interesting defenceman at this stage in his career. This past season, he put up 43 points for the Sabres while logging big minutes (24:38) but, at the same time, he also posted a -41 +/- which landed him in dead last in the NHL. So I guess my question is, how much does a team value points when the guy putting them up can’t seem to defend all that well?

A complete two-way center who excels in his own end; first and foremost he is a competitor. Horvat always plays like there are 5 seconds left, and doesn’t take a shift off. He plays to win, not for himself, but for the team. He is dependable in any situation and is exceptional in the face-off circle. Can finish chances as well as create them.

In each of his five seasons with the Canucks, Bo Horvat has increased his points totals year over year and only seems to be getting better. As an Oilers fan, it’s annoying to see two players on the 2013 list progressing as they have, but, I guess, that’s what we have to hope for with the Oilers picking in the 8th slot this season. I guess what I’m saying is that the Oilers will have done very well if they can walk away from the weekend with a guy like Bo Horvat added to their depth chart.
Advertisement
Ad
Advertisement
Ad

Moving his way up the draft boards is rangy pivot Valeri Nichushkin after an impressive showing for Russia at the 2013 WJHC. Nichushkin’s overtime goal in the bronze medal game sent Canada home without a medal for the first time in 14 years. Easily the top-ranked Russian forward in this draft class, Nichushkin has climbed his way up the ranks by impressing with the use of his sizeable frame, coveted net drive game and dangerous shooting arsenal. Nichushkin is a player with tons of raw offensive potential and this ranking reflects that. Whether or not the Russian factor comes into play at the draft, Nichushkin has top-10 skills.

I remember being jealous of the Stars after Nichushkin’s rookie season and wondering if the Oilers might have been better served to take him instead of Darnell Nurse. Man, how bad of a take was that? After putting up 34 points in his rookie season, Nichushkin hasn’t come close to matching that total again in the six five years since. To make matters worse, he actually disappeared to the KHL for a couple of seasons before returning to Dallas in 2018-19 for a brutal, goalless campaign. So what’s the lesson here? Sometimes it takes a little bit of patience before you can really see what you’ve got in a guy.
Advertisement
Ad
Advertisement
Ad

I’m happy I decided to look back at the 2013 draft rather than continuing on with the 2017 class. With four/five/six years under their belts, these guys are basically the players they will be for the teams that chose them if not very close. Outside of Valeri Nichushkin, the other four players have firmly established themselves as NHL players and that gives me hope that we’ll get a similar result with whoever the Oilers pick tomorrow night. To put it another way, I think most Oilers fans would be reasonably happy to have any of the first four players on our countdown on the roster and it shows the type of quality that can be available in this middle range. Point being, the Oilers are going to get a good player.
Advertisement
Ad
Advertisement
Ad

Odds Shark, your one-stop shop for picks, odds, betting news and trends – a resource for fans, bettors and media outlets looking for wagering info on all the sports and pop culture events you could want. Odds Shark is a proven powerhouse in the sports betting industry. We have odds from around the globe, giving you the opportunity to seek out the best sports betting information along with our recommendations for the best online sportsbooks on the planet. Fans and media outlets alike have access to decades of stats and trends from our easily accessible databases.