Advertisement
Ad
WJC GDB 4.0 Wrap Up: Canada hold off Finland to finish perfect in the preliminary round 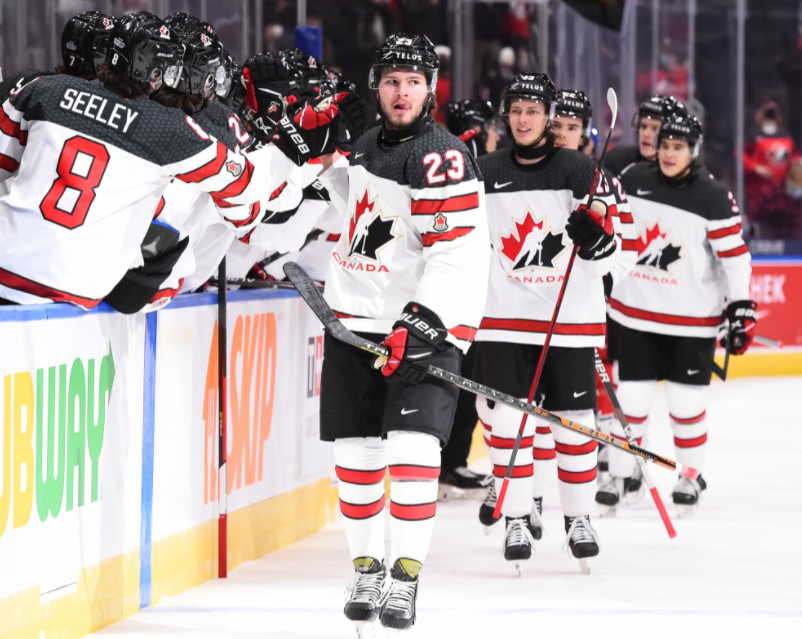 By Liam Horrobin
5 months ago
Comments
Finland pushed until the end, but Canada held on to win 5-3 and finished perfectly in the preliminary round for the second consecutive year.
Finland had the first attack of the game outshooting Canada 4-0 in the opening five minutes. The Canadians withstood the pressure and then scored on their first shot of the game. After some great work down low, Brennan Othmann found his way to the front of the net and tipped an Olen Zellweger shot by Leevi Merilainen. That started a three-goal period for Canada, which was finished by future star Connor Bedard. Bedard ripped the puck high on Merilainen towards the backend of the period. Any replay you see will not justify how great that goal was. Tyson Foerster also got his name on the boxscore after Ridly Greig battled his way through the Finnish blueline and found him for a tap-in. Finland scored with 47 left in the period to give them some hope heading into the intermission.
Advertisement
Ad
Advertisement
Ad
However, that glimmer was quickly disposed of when Greig made it 4-1 only 31 seconds into the second period. A goal he earned after the effort he put into Foerster’s goal in the first period. Canada was the better team in the second and gave themselves many chances to put their lead out of reach. William Dufour was denied shorthanded, and Mason McTavish was stopped on the Finnish doorstep on the powerplay. McTavish would get his goal shortly after that miss. Zellweger teed him up perfectly for a one-timer which McTavish hammered by Merilainen to make it 5-1. A sight the Anaheim Ducks would’ve loved to have seen.
Advertisement
Ad
Advertisement
Ad
In the third period, things were a little dicey for Canada. The puck looked to have left the play, which the TSN commentary team pointed out, but no whistle was heard. Joakim Kemell then scored on the play, which was immediately reviewed by Canada. However, there was no camera angle that proved that the goal would stand; therefore, Finland was now back within three. Not long after, Will Cuylle was ejected from the game for kneeing and received a five-minute major. Canada was already on the penalty kill, so they had to kill off a 5-on-3 and then remainder on the Cuylle penalty. Luckily for the Canadians, they could kill off both penalties and didn’t allow a shot after the 5-on-3 penalty had expired. Roby Jarventie did score later on the powerplay, but the game was quickly sealed away when Dufour scored on an empty net.
Canada will next play Wednesday taking on Switzerland at 5 p.m. MST.

tyson foerster drives to the net and cashes in canada's second goal of the first period. pic.twitter.com/NsuyWnMQGS

a man on a mission, ridly greig crashes the crease and bangs home a loose puck. 4-1 canada. pic.twitter.com/bveCdElAlK

a slightly confusing situation at rogers place. the puck appeared to hit the netting; a moment later, joakim kemell finds the back of the net. the referees review it, but the call stands. canada holds a 5-2 lead early in the third. pic.twitter.com/IhZ11JoQTE

will cuylie's night is over and finland gets a five-minute powerplay. cuylie is called for kneeing. live speed + replay. pic.twitter.com/X6jQZgh4Id

and now slightly less interesting, as william dufour finds the empty net for canada to make it 6-3. pic.twitter.com/dl2hy1NNpE

Want to watch the next generation of hockey stars before they make the show? The World Junior Championship is coming to Edmonton and this is your call to grab tickets! Get your tickets here
Advertisement
Ad
Advertisement
Ad