Advertisement
Ad
A Look at 50-Goal Scorers. Will Draisaitl Join Them? 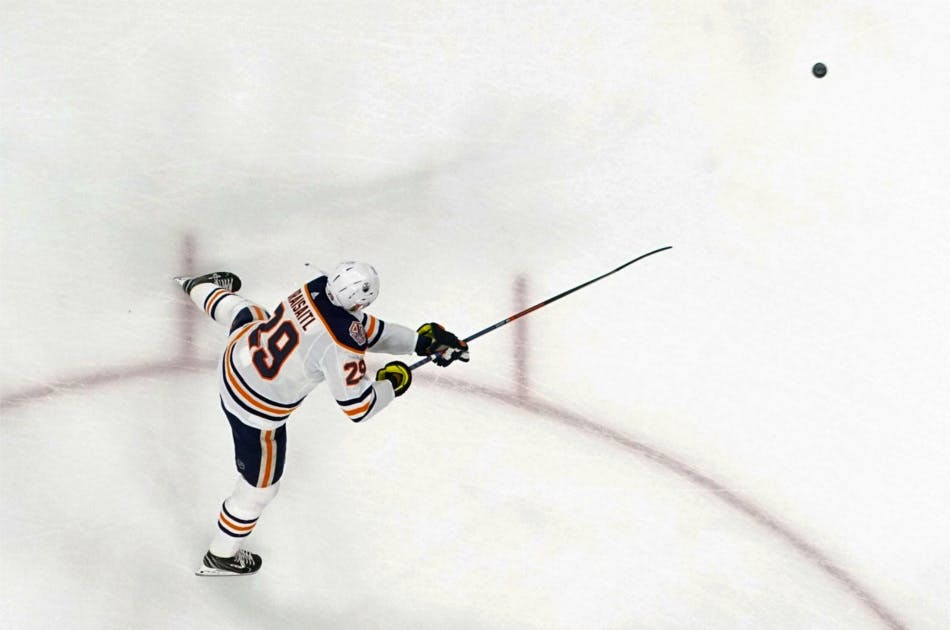 Photo credit: James Guillory-USA TODAY Sports
By Jason Gregor
3 years ago
Comments
It is very fitting that the trophy for the NHL’s leading goal scorer is named after Maurice Richard. He was the first player to score 50 goals. He potted 50 goals in 1945 when the season only had 50 games. It was a remarkable achievement. Prior to him reaching 50 only three players prior had even scored 40 goals. Conney Weiland (43), Dit Clapper (41) and Howie Morenz (40) reached 40 goals in 1930 when they played 44 games.
Joe Malone was a sniper in the 1920s, scoring 39 goals in 24 games in 1920, while Newsy Lalonde potted 37 in 23 games the same year, but when Richard reached 50 goals in 1945 it became the new goal scoring standard.
Richard was the only 50-goal man for 16 seasons until Bernie “Boom Boom” Geoffrion scored 50 in 1961. Bobby Hull scored 50 in 1962, and he became the first player to surpass 50 when he scored 54 in 1966.
Phil Esposito scored a ridiculous 76 goals in 1971, beating Hull’s previous high of 58 from 1969. Esposito’s record stood until a young lad named Wayne Gretzky potted an amazing 92 goals in 1982. Gretzky’s record still stands, and likely will never be broken.
Becoming a 50-goal scorer is an amazing feat. Only 91 players are in the 50-goal club and they’ve done it a total of 195 times.
Advertisement
Ad
Advertisement
Ad
Just 45 players managed to do it twice in their careers and only a special group of 20 managed it three times or more.
Luc Robitaille, Rick Vaive, Teemu Selanne, John Leclair, Cam Neely and Jaromir Jagr reached it three times.
Michel Goulet, Jari Kurri and Tim Kerr four times.
Bobby Hull, Phil Esposito, Steve Yzerman, Brett Hull and Pavel Bure did it five times.
Guy Lafleur, Marcel Dionne and Mario Lemieux did it six times.
Alex Ovechkin has eight 50-goals seasons.
Wayne Gretzky and Mike Bossy each reached 50 goals an amazing nine times.
Edmonton Oilers forward Leon Draisaitl scored twice last night and has 49 goals. He has one final chance, tomorrow night in Calgary, to join a very exclusive club. Toronto Maple Leafs forward John Tavares needs three goals tomorrow to reach 50. It has happened before.
Advertisement
Ad
Advertisement
Ad

Nov 24, 2017; Buffalo, NY, USA; Edmonton Oilers center Leon Draisaitl (29) skates up ice with the puck while being defended by Buffalo Sabres defenseman Rasmus Ristolainen (55) during the third period at KeyBank Center. Buffalo beats Edmonton 3 to 1. Mandatory Credit: Timothy T. Ludwig-USA TODAY Sports
It is interesting to note the 26 times a player has finished with 51 goals and 37 times they finished with 50. Only 13 times has a player finished with 49 goals, and of that group only four of them never scored 50 in another season.
Advertisement
Ad
Advertisement
Ad
Rick Middleton, Jimmy Carson, Richard Martin, Steve Shutt, Esposito, MacLeish, Goulet, Gartner and Ovechkin last season finished with 49, but reached 50 in another year.
Of these nine, Ovechkin, Esposito and Goulet scored twice in their final game to reach 49, while Gartner, Middleton scored once.
The heartbreak club of sitting at 49, but never reaching 50, includes Gordie Howe, Frank Mahovlich, Kent Nilsson and Rob Brown.
Nilsson scored twice in his final game to get close, while Mahovlich potted one. Brown and Howe were unable to score in their final game.
Look at it this way: In the history of the NHL, 96 players, including Draisaitl, have scored 49 goals, and 91 of them went on to score 50. Draisaitl wants to be number 92.

WILL DRAISAITL DO IT?

It is interesting to see how many players who were on the cusp of 50 goals scored in their final game to reach it.
Advertisement
Ad
Advertisement
Ad
It is a massive accomplishment to score 50 goals in a season, and last night Draisaitl had some great chances in the third period. After Aaron Dell made a pad save on one shot, Draisaitl looked skyward. He thought he should have scored on that shot.
The season has been a disappointment for the Oilers, but the individual play of Connor McDavid and Leon Draisaitl has been anything but disappointing. They’ve been great, and Draisaitl would love nothing more than to score his 50th tomorrow.
“Absolutely. It is something special,” said Draisaitl. “I’m not sure I’ll ever get that chance again so I’m going to try and make the most of it. I really appreciate the guys trying to set me up.”
It will be a rallying point for the entire team.
Advertisement
Ad
Advertisement
Ad
“It will be for sure,” said Oscar Klefbom. “I don’t know the last time an Oilers scored 50 so it is going to be exciting. He’s had a great year. The way he and Connor have produced this year is really impressive. It’s probably more impressive for me as a defenceman, because I know how many good defencemen try to shut them down every night. It’s amazing.”

The Edmonton Oilers haven’t had a 50-goal scorer since Gretzky had 62 and Kurri scored 54 in 1987. Craig Simpson had a total of 56 goals in 1988, but only 43 of them came as a member of the Oilers.
Scoring 50 goals in today’s game is very rare. Only Ovechkin, four times, has done it since 2012. Many organization haven’t seen a 50-goal man in decades.
Advertisement
Ad
Advertisement
Ad
Five franchises have never had a 50-goal scorer. New Jersey, Columbus, Minnesota, Nashville and Las Vegas. Vegas is only in their second season, while Columbus and Minnesota entered the NHL in 2000/2001 and Nashville arrived two years earlier. The real drought is the Devils organization. They started in Kansas City in 1974, then relocated to Colorado in 1976 and then to New Jersey in 1982. In 44 years this franchise has never produced a 50-goal scorer. Brian Gionta was the closest when he scored 48 in 2006, followed by Zack Parise’s 45 goals in 2009 and Alex Mogilny’s 43 and Patrik Elias’ 40 both in 2001.
Here’s the last 50-goal man for each franchise.
Hartford/Carolina: Blaine Stoughton in 1982
Edmonton: Gretzky and Kurri in 1987
Montreal: Richer in 1990
Buffalo: Pat Lafontaine and Mogilny in 1993
Chicago: Roenick in 1993
Los Angeles: Robitaille in 1993
New York Islanders: Pierre Turgeon in 1993
Boston: Cam Neely in 1994
Detroit: Ray Sheppard and Sergei Fedorov in 1994
Dallas: Mike Modano in 1994
St.Louis: Shanahan and Brett Hull in 1994
Toronto: Dave Andreychuk in 1994
Arizona: Keith Tkachuk in 1997
Philadelphia: Leclair in 1998
Vancouver: Bure in 1998
Florida: Bure in 2001
Colorado: Hejduk in 2003
New York Rangers: Jaromir Jagr in 2006
San Jose: Jonathon Cheechoo in 2006
Ottawa: Heatley in 2007
Atlanta/Winnipeg: Ilya Kovalchuk in 2008
Calgary: Iginla in 2008
Anaheim: Corey Perry in 2011
Pittsburgh: Malkin in 2012
Tampa Bay: Steven Stamkos in 2012
Washington: Ovechkin in 2019
Advertisement
Ad
Advertisement
Ad