A Complete Lack of Effort 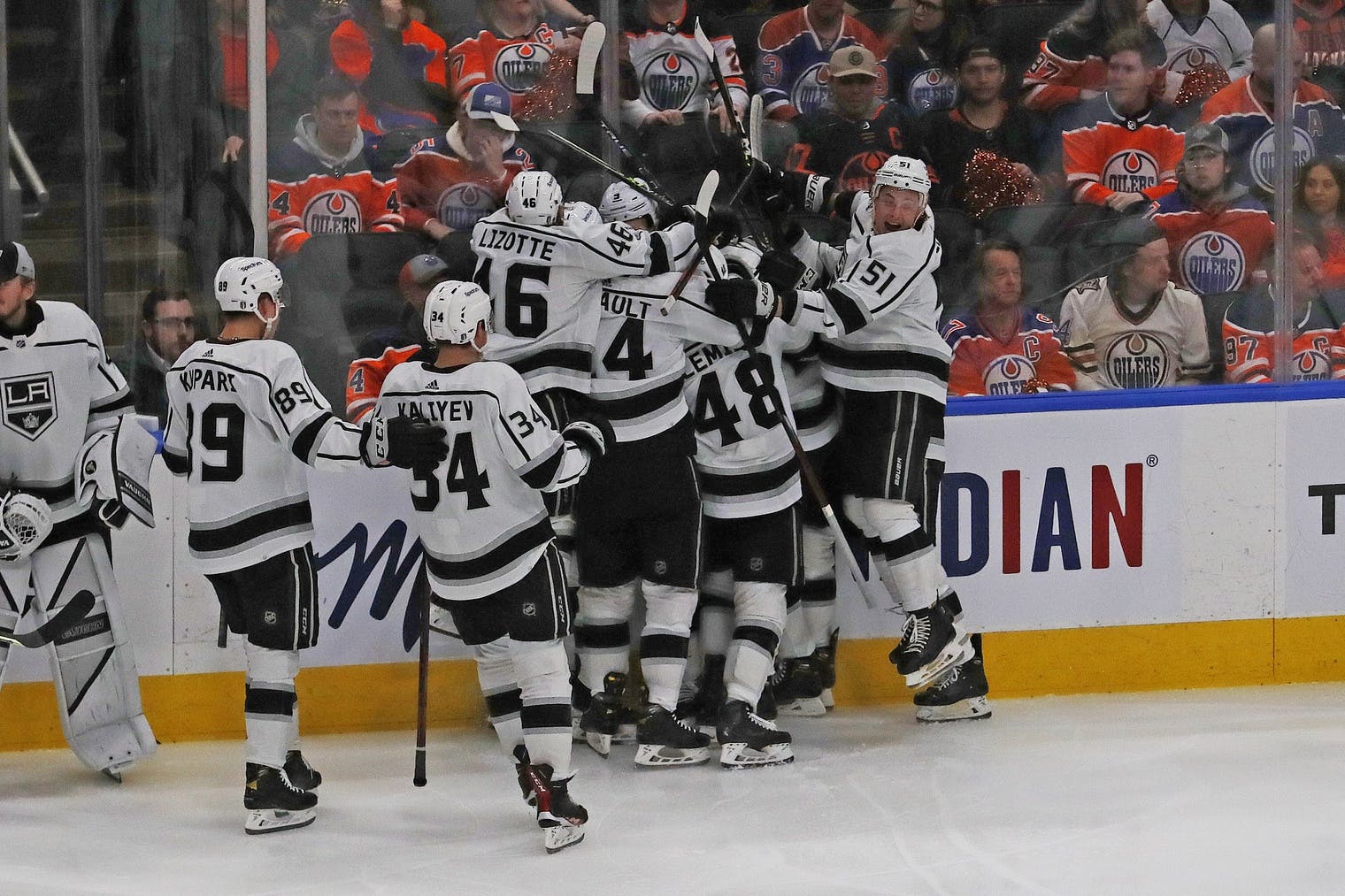 By Jason Gregor
6 months ago
It is very difficult to play 60 minutes of sound, solid hockey, but you can’t sleepwalk through the first 40 minutes of a pivotal game five and expect to win.
You could pick many adjectives to describe the Oilers’ play through two periods: horrendous, dreadful, appalling, shocking, ghastly, hideous, lousy, frightful, awful, and alarming to name a few. In their biggest game of the season to date, the Oilers simply weren’t good enough.
They showed life in the third period to extend the game to overtime, but then the opening shift mirrored the first period, as the Kings hemmed the Oilers in for a minute, and @Brett Kulak, @Duncan Keith, and @Connor McDavid couldn’t get off the ice. It was clear how much of a difference fresh legs makes. @Adrian Kempe stepped on the ice and 16 seconds into his shift he blew by Keith (72 second shift) to score his second of the game and put the Oilers in their first legitimate must-win situation of the season.
If the Oilers can’t figure out how to match the Kings’ intensity and commitment at 5×5 in game six then the series is over. It’s that simple.
Some will want to finger point at individuals, but the game five loss was a complete team effort. I didn’t like Duncan Keith’s decision to just chip the puck out rather than pass it to Evander Kane on Kempe’s first goal of the game. Keith’s play on the OT winner was a combination of him being at end of shift, Kempe being fresh, as well as Kane falling in the neutral zone. Keith’s decision on Kempe’s first goal was his main blunder. And Smith likely would probably want Kempe’s first goal back, but he also made many key saves when the game was 2-1 and 3-1.
Even Kempe talked about getting on the ice in OT against guys who were tired.
“I saw McDavid was still out there and I knew he started (the overtime),” Kempe said in his post-game interview on ESPN. “I had a step on him. He’s still really fast, but I got him there and their D-man as well. That was nice.”
This was a complete team loss.
The Oilers were outshot 16-5 in the first period and only trailed 1-0. They were lifeless in the first frame.
Their shots on goal were mainly from a distance.
@Warren Foegele 48 feet.
@Tyson Barrie 57 feet.
@Ryan Nugent-Hopkins seven feet
@Connor McDavid 29 feet.
@Leon Draisaitl 45 feet
The Kings had four shots from 39 feet of closer in the first four minutes. They added eight more within 28 feet before the period was over.
While the Oilers were content to play on the perimeter the Kings were much quicker, more aggressive and attacked from close range.
The second period was a slight improvement as the Oilers had nine shots, six from within 29 feet, but they rarely had the Kings on their heels.
The past two games the Oilers have been outscored 6-1 at 5×5. It hasn’t been close.
At least when they lost to the Jets last season, the Oilers outplayed and outshot them in the games they lost.
The past two games they were completely overwhelmed at even strength.
In games two and three the Oilers outscored the Kings 9-2 at 5×5, so they’ve shown they can break down their 1-3-1 neutral zone system. They better figure it out quickly.
They had way too many passengers last night. They will need everyone ready and willing to battle tomorrow or this series will be over.

Listening to Leon Draisaitl post-game it is clear he is sick. His voice was hoarse and he sounded congested. He, like most of the team, looked better in the third period but it is clear he is battling some sort of cold or illness.
Darnell Nurse has a hearing for this headbutt on Philip Danault.
A one-game suspension seems very plausible. If Nurse is out, then Kris Russell draws in, but I wonder if the Oilers recall another D-man and consider dressing seven. Brett Kulak would likely move up and play with @Cody Ceci, as he did late in the season when Nurse was out with an injury.
After game three the Oilers looked like they were in control of the series. That has changed quickly after the past two games, and now the Oilers have to make some adjustments like the Kings did and find a way to produce some chances and goals at 5×5.
If they don’t, their season is over.