A guide to my offseason coverage and the analytics behind them

By Zach Laing
1 year ago
It’s been a few weeks since the Edmonton Oilers were eliminated in the playoffs by the Winnipeg Jets. While a wound that still feels fresh, the disappointing end to the season and what let us there is due for a review.
Much like last year, I’ll be digging into the season that was for the Oilers. So take this as a guide to my Season In Review pieces that will start rolling out soon. Why am I doing this? So that you, the reader, can better understand what certain analytics mean and how they impact the game.
Never heard or read about analytics before and why they’re so important? Take this article as a bit of a crash course in that sense as everything you’ll see below will be included in pieces to follow.

First off, what are analytics?

When you boil it all down, all analytics in hockey do is track shots, shot attempts, and goals.
The use of analytics in hockey on a large scale is still fairly new. The old Moneyball story of the Oakland A’s really helped kick things off while in hockey, Vic Ferrari developed Corsi as hockey’s first true analytic. Rob Vollman’s Hockey Abstract helped popularize it with numerous books on the topic.
Corsi is a metric used to track shot attempts while in the offensive zone. One corsi is one shot attempt whether it hit the net, was blocked, or missed the net entirely. It helps to give a look into the pace of play and which team is driving it. The higher the corsi, the higher the amount of shot attempts fired on net, the higher the offensive possession time.
For teams, a corsi percentage evaluates the whole performance of the club, while for individuals, it highlights the number of shot attempts.
From there, more analytics have been developed. Another I use frequently is expected goals. There’s a few models out there, each that vary slightly, but I tend to use the one done by Natural Stat Trick’s Brad Timmins more often than not. The creators of the models have taken huge sets of shot data from the NHL that shows a plethora of information. The first version of these models was created in 2004 by Alan Ryder, however, Brian MacDonald’s presented at the 2012 SLOAN conference is believed to be the first that caught on.
From a model done by MoneyPuck, here’s the list of what goes into tracking an expected goal in order of its importance:
To dumb it all down, expected goals highlight what the probability is that any shot attempt will result in a goal. As a whole, it’s shown to be a better predictor of future scoring than Corsi.
The last one to round out the big three is PDO — an equation combining shooting percentage and save percentage that helps to track “luck” on the ice with the median being 100. Anything higher and a player, or team, is considered lucky, and any lower being unlucky.
So those are some of the basics I like to use. Another incredibly useful tool I utilize in the analysis of all players are isolated impact charts built by Micah Blake McCurdy at hockeyviz.com. His site uses heatmaps and expected goals to generate charts breaking down a players impact on the ice. You can read more about that here.
Almost all of these analytics can be extrapolated over an hourly rate helping to standardize

So why do we use analytics?

All in all, teams across the league are building out large analytics departments. The Oilers, meanwhile, are still far behind in its use. Here’s a full list of publicly known analytics hires, as created by @hayyyshayyy. 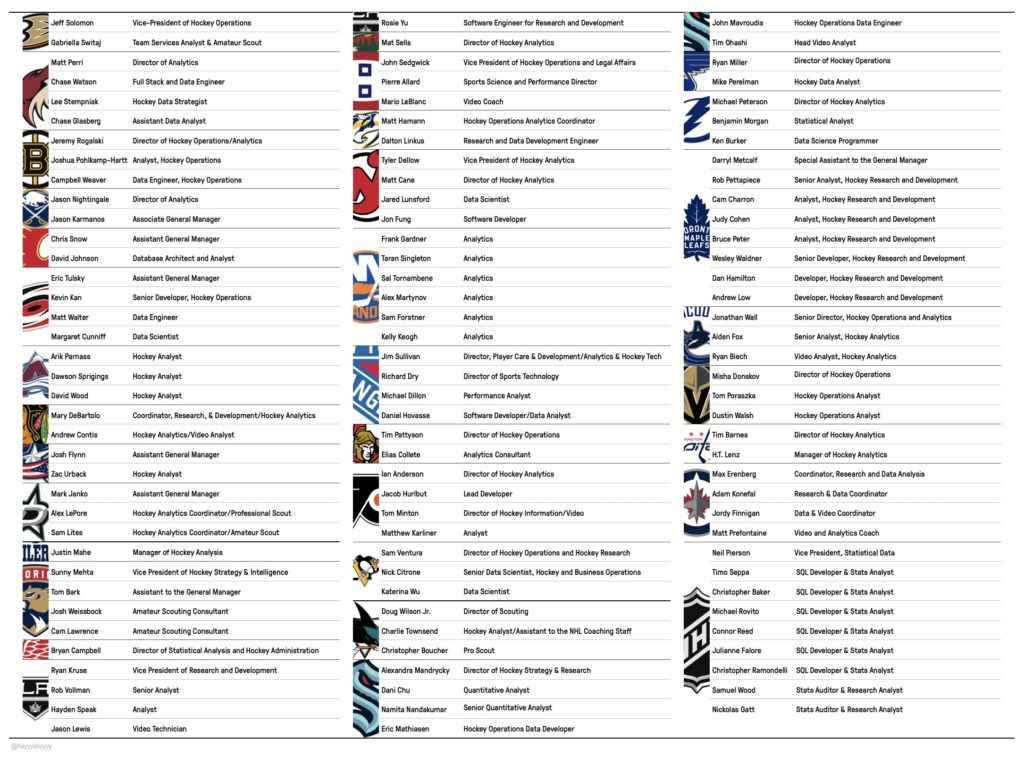 Analytics are a tool in the toolbox of hockey evaluation and while they aren’t the be-all and end-all to breaking down the game, they’ve been proven to work in evaluating players, teams and prospects. Sure, there aren’t metrics to track “heart” or “good in the roominess,” but that’s why it’s just one tool to be used amongst others. As noted above, teams across the league are already using these, and plenty other analytics.
It’s near impossible to remember everything that happened over the course of a season and all the aforementioned analytics I use help me get a better understanding of what a player did this year. It also helps to quantify changes and improvement’s in players game over time.

Well, great question!
Over the next few days I’ll be posting my reviews of the Oilers offence, defence, goaltending and special teams, all in four separate articles. From there we’ll dive into players individual seasons in short, but easily digestible articles.
Here’s one you can look back on from last year where I dove into Leon Draisaitl’s MVP campaign.
Zach Laing is the Nation Network’s news director and senior columnist. He can be followed on Twitter at @zjlaing, or reached by email at zach@oilersnation.com.
Nation Takes
News
Oilers Talk
Uncategorized
Recent articles from Zach Laing