By Robin Brownlee
2 months ago
For one game at least, pretty much everything that had been wrong with the Edmonton Oilers was right again, and it turned around in the unlikeliest of places Tuesday on the way to a 3-2 win over the Tampa Bay Lightning at Amalie Arena, where they hadn’t won in nine years.
At the top of the list was goaltender Jack Campbell, so upset with his performance after a 6-2 loss to the Dallas Stars just a handful of games into a five-year ticket with the Oilers, he characterized his play as pathetic – his word. Campbell came up with a 35-save gem against the Bolts, easily his best outing of this season.
Next up as far as boxes needing to be checked was the penalty kill, which hasn’t been able to get out of its own way too many nights this season, most recently Monday when it allowed four power-play goals in a 5-4 loss to the Washington Capitals. The PK didn’t give the Lightning a sniff in five attempts. As a bonus, it opened the scoring on a shorthanded goal by Warren Foegele, who found the back of the net for the first time this season.
Finally, instead of playing from behind as they had too often in their first 13 games, the Oilers got on the scoreboard first and didn’t spend even one second chasing the game. All told, it was good enough to snap a three-game losing streak and send the Oilers to Carolina in a better frame of mind – save for the loss of Evander Kane, who had his wrist cut by Pat Maroon’s skate in the second period. 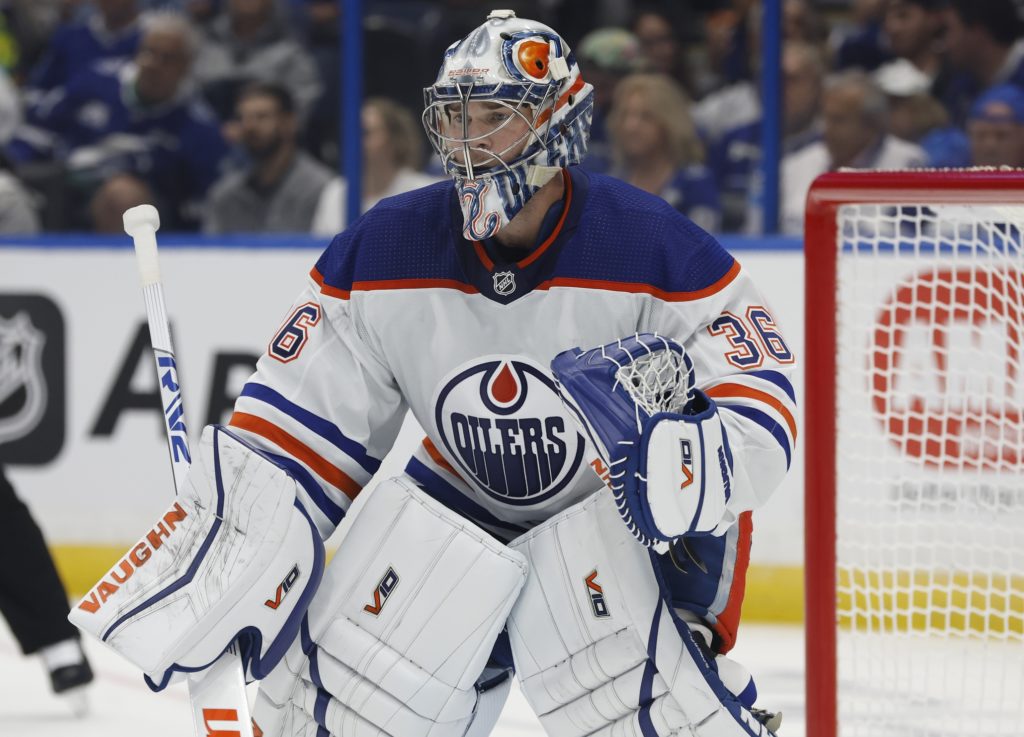 Nov 8, 2022; Tampa, Florida, USA; Edmonton Oilers goaltender Jack Campbell (36) during the first period against the Tampa Bay Lightning at Amalie Arena. Mandatory Credit: Kim Klement-USA TODAY Sports
“It felt good going in,” said Campbell, who turned aside 15 of the 16 shots he faced in the first period. “They had a good push like they always do in this building. I thought the guys played great. The PK was amazing and we got a big shorthanded goal there too from (Foegele).
“It’s much more up to my standard and I thought the team played great in front of me so just all around really happy with the performance and ready to move on.”
Leon Draisaitl, clearly frustrated in recent days by the Oilers penchant for playing from behind and having to scramble to get back into games, scored the 3-1 goal and the eventual winner on a power play in the second period – his fifth consecutive game with a goal.
The PK limited Tampa Bay to six shots. Along the way, Jesse Puljujarvi had his best game of the season, at least in terms of being involved offensively, with five shots on goal and Connor McDavid kept his goal-a-game pace going with his 14th to put the Oilers ahead 2-1.
On top of everything else, the Oilers buckled down and stayed on task after the Kane injury, which is no small feat in itself. It was a frightening scene as Kane raced off the ice and down the tunnel in a trail of blood calling for help.
“I think what you do is you share the information as you get it,” coach Jay Woodcroft said. “So, when the trainer came back to the bench, and when we got word back to the bench, we let our players know immediately, just so there was no concern. Then in between periods, we talked about it. Evander is a real popular teammate, and he’s an important piece of our team, and we wanted to make sure that his teammates knew where he was at.”

One game doesn’t qualify as a turnaround — just like a three-game skid doesn’t signal all is lost even if it gets the fanbase barking, as it did going into Tampa Bay – but it might prove to be a turning point, something to build on. Campbell called himself out and he delivered. Maybe he builds some confidence now. The PK is still ranked 30th at 70.5 per cent and will need a lot more games like this one to dig itself out of the hole its in. More of the same against the Hurricanes Thursday wouldn’t hurt.
It’s a starting point, and that’s better than the alternative.
Editorials
Featured
Oilers Talk
Recent articles from Robin Brownlee