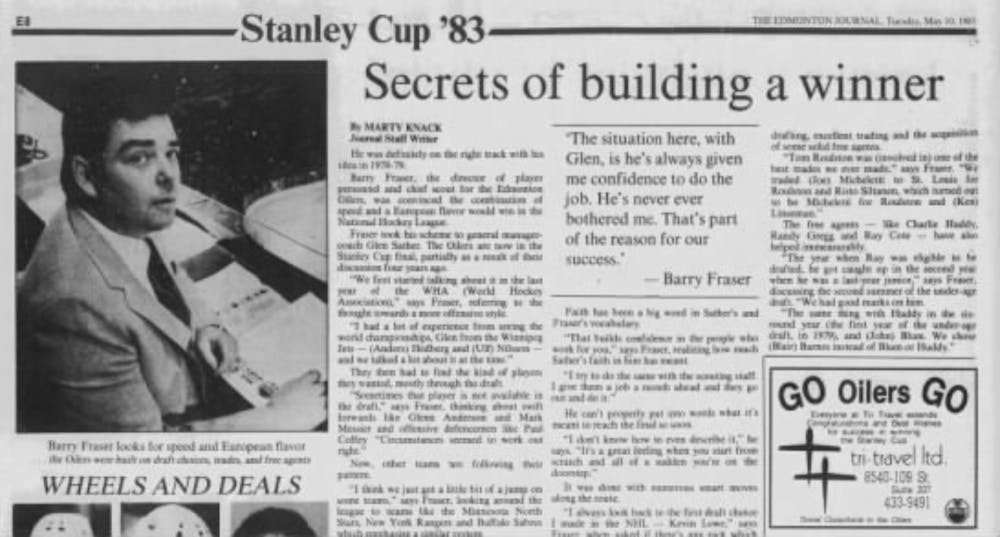 By Zach Laing
1 month ago
Former Edmonton Oilers head scout Barry Fraser has died at the age of 82.
Fraser, who reportedly had numerous health issues, passed away Sunday morning, the Edmonton Oilers announced.
There were few players in the history of the Oilers’ organization who had such as meaningful impact as that of Fraser. Hired by the Oilers in 1979-90 as their director of scouting, his eye for talent was massive.
Let’s run through some of his early drafts: 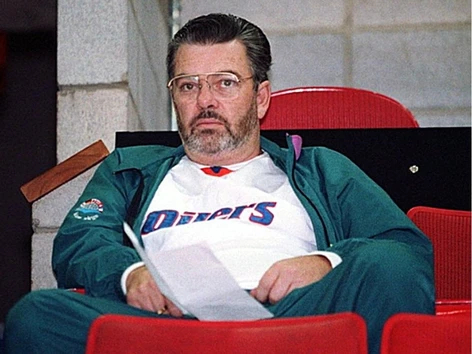 Oilers scout Barry Fraser sits in the stands at the Northlands Coliseum circa 1990. LARRY WONG / Postmedia
“I remember going to see (Grant) Fuhr play once and he was dreadful,” former Oilers GM Glen Sather told Postmedia’s Jim Matheson. “I saw him a second time and same thing. I said to Barry, ‘Are you sure?’ Barry said he’d seen Grant play 25 or 30 times, and yeah, he was sure. Same thing with Coffey. He was adamant.“Barry never took days off. He knew the background of the player and when you would go to a game with him, his big thing was how the player played in traffic. That was really important to Barry. The players in Edmonton used to call him Chief, as in chief scout.”In 1984-85, Fraser also took on the role of director of player personnel for the Oilers, a role he’d hold for the next nine years. Fraser departed the Oilers after the 1999-00 season and didn’t work for another franchise.
Despite that, he was a scout until his final days.
“After he died, I found these notes on the coffee table, things he’d written on pieces of paper,” Fraser’s wife, Tina, told Matheson, “So and so’s name, what he thought. He was an armchair scout from the day he retired.”
Zach Laing is the Nation Network’s news director and senior columnist. He can be followed on Twitter at @zjlaing, or reached by email at zach@oilersnation.com.
Featured
Nation Takes
Oilers Talk
Recent articles from Zach Laing