Canada Dominates Switzerland on Night One of the Hlinka Gretzky Cup 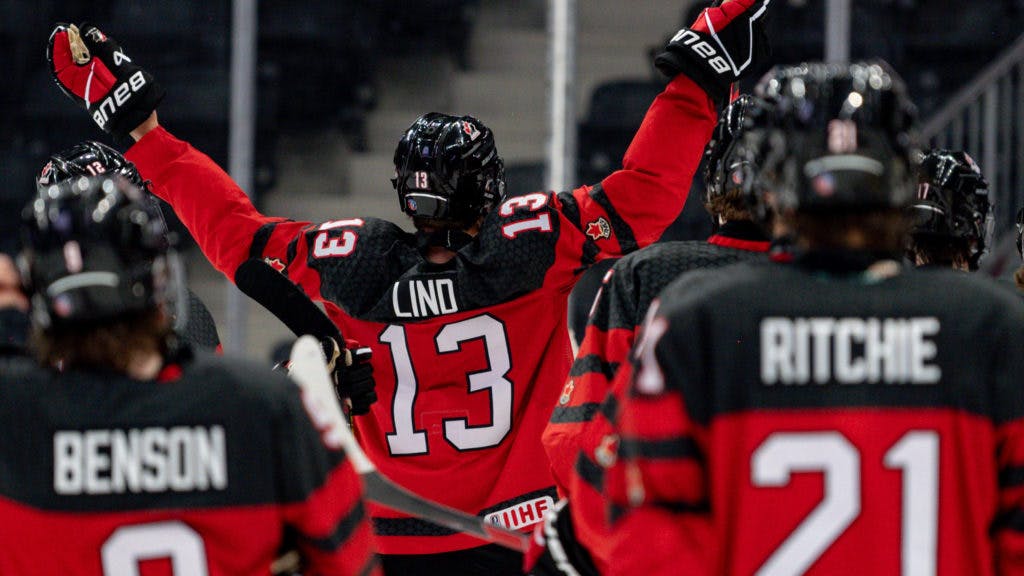 By Liam Horrobin
3 months ago
Canada’s quest for gold got off to a perfect start in Red Deer, beating Switzerland 14-0, not a typo, in their first game of the Hlinka Gretzky Cup.
More than half of Canada’s goals came in the opening period, with Colby Barlow getting the first on a shorthanded breakaway. Barlow scored a second in the period and soon joined Carson Rehkopf, Brayden Yager, Matthew Wood, Andrew Cristall, and Ethan Gauthier, who scored twice. Sixteen players scored a point in the first period for Canada, including goaltender Scott Ratzlaff. Switzerland switched goaltenders only nine minutes into the game after Diego Simeoni allowed four goals on seven shots.
The hosts had their fans in Red Deer celebrating six more times before the buzzer sounded in the third. Riley Heidt scored the signature goal of the night with nine seconds left, dragging the puck around a Swiss defenceman and then sliding the puck through Huet’s legs. The Canadian’s remaining five goals came from Gauthier, completing the hat trick, Kalen Lind, Denver Barkley, Caden Price, and Calum Ritchie.
Scott Ratzlaff wasn’t given much to do, but when called upon, he answered. Early in the first period, the officials called Rehkopf for boarding leading to the first powerplay of the game. A turnover from the Canadians gave Switzerland a golden opportunity to score first but Ratzlaff denied them point blank, and that save led to him getting an assist on Barlow’s shorthanded goal. The Thunderbirds netminder finished with a 17-save shutout.
Overall, Head coach Stephane Julien couldn’t have asked for much better from his team. They came out earlier with high energy and put the game out of reach in the first period. After that, the game got a little looser which led to some errors here and there, however, if Canada tightens that up against more formidable opponents then their skill will do the rest of the talking. All but one forward managed to register a point along with 17 of the 20 skaters, which should help confidence levels. Not every game will come this easy for the Canadians as they still have Sweden left to play in the preliminary round.

*quotes from the Hockey Canada Website
“Credit to our players tonight. The first penalty kill we got a big save from Scott (Ratzlaff) and we turned around and scored. That was a big moment in the game for us and then we capitalized every time we had some time in the offensive zone. It’s a short-term tournament, and you don’t want to create bad habits. That was the challenge from our staff and overall, we can’t be disappointed about much tonight,” said Heach coach Stéphane Julien
“It’s a privilege to play on the penalty kill. You have to be thinking defense first but tonight we got a couple of bounces, and I was fortunate to capitalize on my chances,” said Colby Barlow, who scored twice shorthanded.
“I’m proud of our guys tonight. Up and down the lineup we had guys chipping in. It’s tough to keep your head in it when the game gets away like that, but credit the Swiss, they played hard right to the end and kept us honest,” said Captain Cameron Allen, who finished with four points.

Canada is back in action on Tuesday night when they take on Team Slovakia. The Slovakians won the competition in 2021 but are now without Juraj Slavkovsky and Simon Nemec, who went 1st and 2nd in the most recent NHL Draft. In the pre-tournament game, Slovakia lost 8-0 to Team USA. We’ll see if the Slovaks’ luck changes when they play Team Sweden today.

Want to watch the next generation of hockey stars before they make the show? The World Junior Championship is coming to Edmonton and this is your call to grab tickets! Get your tickets here.
News
Post Game
Recent articles from Liam Horrobin