Canada Perfect In Group Stage With Win Over Sweden 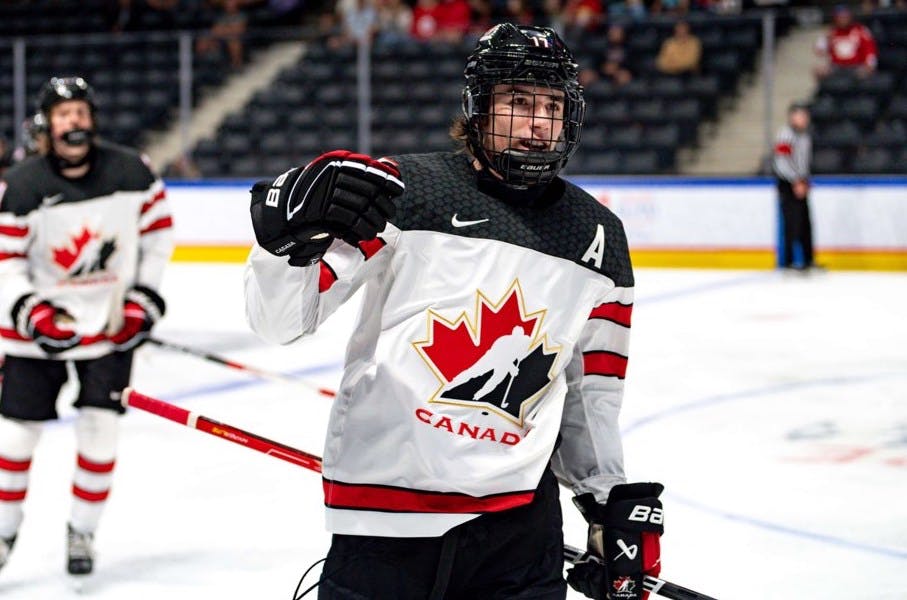 By Liam Horrobin
4 months ago
Canada wrapped up their group stage play with a 3-0 win over Sweden, which was their toughest test yet and one they handled nicely. The Canadians controlled most of the game, limiting the Swedes to only 18 through 60 minutes.
Initially, it felt like the hosts were on their way to another comfortable victory when Callum Ritchie scored only three and a half minutes into the game. Ritchie found some space in front of the net and hit the gap, firing the puck past the keeper to make it 1-0. His shot took a fortunate bounce deflecting off a defenceman’s stick and going over Eric Olsson, who was making his first tournament start. Zach Benson had a great chance to make it 2-0, but a good recovery from the Swedish defenceman prevented anything serious from happening.
The second period was when Canada put the dagger into their opponent. Benson found redemption by putting backhand by Olsson to double the Canadian’s lead, which was the first time the first line had connected as they had versus Switzerland and Slovakia. Brayden Yager scored his fourth of the tournament later on the power play.
There wasn’t anything else to report on the stat sheet other than a few penalties. Saige Weinstein made a terrific diving play to stop a Swedish forward on a breakaway. However, with the way Scott Ratzlaff was playing, you might have been better off putting your money on him rather than the shooter. Ratzlaff had another excellent performance in goal for Canada and has yet to concede. Sweden kept him busy with some great chances, but the Seattle Thunderbirds netminder shut the door. The visitors did have one big chance, which could have changed the game completely. Otto Stenberg fired a shot off both the goal post and the crossbar whilst on the powerplay and, at the time, the game was still only 1-0 to Canada.
Some unfortunate news for Canada was that Tanner Molendyk left the game in the second period and didn’t return. Hopefully, the injury wasn’t too serious, and with a day off now until the semi-finals, he’ll be able to return to the lineup.

*quotes from the Hockey Canada Website
“Tonight, was a big challenge for us. This was a physical game, and we had to earn it. We blocked some shots and I felt that as the game went on, we got more pucks to the net and a bigger net front presence. I’m very happy for this group and I’m proud of the work ethic we showed,” said Head coach Stéphane Julien
“We battled hard tonight. Sweden gave us the toughest test of the tournament so far and I think we responded well. We played hard, blocked some shots, (Scott) Ratzlaff was excellent and we’re looking forward to the semi-finals,” said Calum Ritchie
“We did a great job tonight. Sweden is a good team and we had to earn this one. We played a full sixty minutes, our goalie played a heck of a game, and our penalty killers didn’t give up anything. When your kill is as good as ours was tonight, you’re going to win a lot of games,” said Brayden Yager

Canada has today off and gets back in action tomorrow versus Finland. The Fins finished in the group stage 2-0-1 with wins over the USA and Germany and an overtime loss to Czechia. The puck drops at 5:00 p.m on Friday night as Canada looks to capture another gold medal.