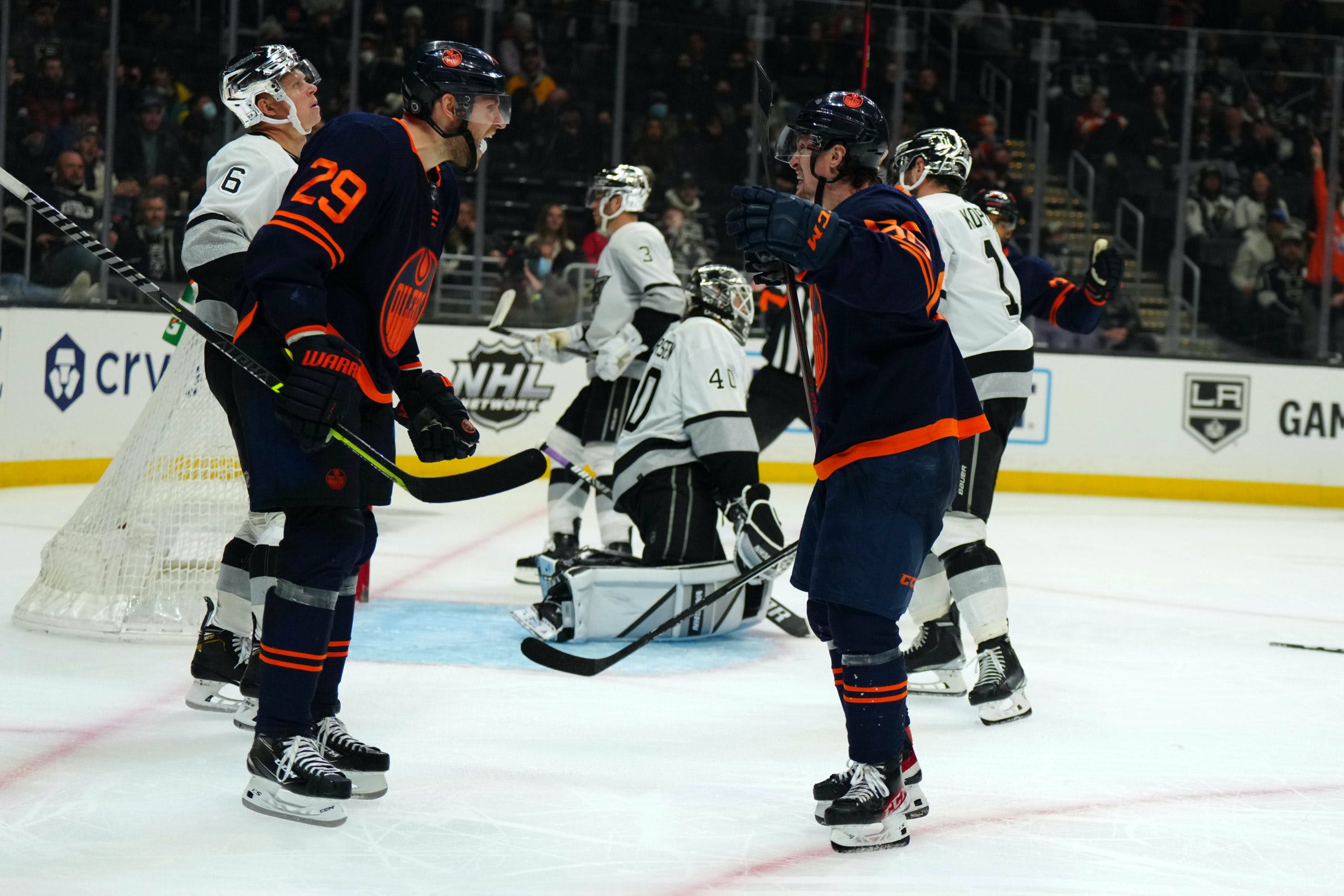 By Zach Laing
9 months ago
Can you smell what Jay Woodcroft is cookin’? Final Score: 5-2 Oilers.
It started slow, got even slow, then picked right back up. All in all, a solid win for the Oilers. BaggedMilk has the Wrap Up here. I’ve got the Clips and Quotes here.

On the game: “We just had the mindset of sticking with it. They get up one early, but it didn’t deter us. Second period we get a big goal late, then stuck with it and kept pushing and pushing and eventually broke through. That’s how we’re going to have to win games second half of the season here. It’s going to be tight checking and nothing is going to be free.”
On his line with Warren Foegele and Derek Ryan: “I think we keep it simple. we go get pucks, and we make plays from there. Last night it was the same mentality, we put pucks deep in switching sides and coming up with it. If you’re going to go dump it, you have to come up with it. Those two guys do a great job of getting in on the forecheck and creating loose pucks and making little plays to each other supporting the puck everywhere.”
On Mike Smith’s game: “He made some huge saves when we needed him to. I thought we did a better job of battling in front of him not giving up too many high-quality chances. When they’re there, he came up big. It’s great to see last night Skins and Schmiddy come up with us.”

On the game: “We stayed patient in our game and we didn’t let it get away from us when we were down 1 there. Banged in a gritty one in the second, and then just kind of stuck with it. There was never really any panic in our game. It seemed like it was going to be who made the last mistake… the other team was going to win the game. It was a valiant effort by our group. we stuck with it and found a way to win.”
On Jay Woodcroft’s impact so far: “Woody has come in and made some changes, but I think, all in all, the players got to want it. You got to want it as a player, you got to want to win and do anything it takes to do that. The details in the game matter so much. That comes down to the players willing to do that, to do what it takes to play a whole 60. Block shots, win puck battles, little stuff like that in games mean so much in the grand scheme of things. Woody has come in and upped the detail level with our players, but the players have bought in and decided that it’s not or never.”
On bouncing back after the first goal he allowed: “Yeah, I mean I’ve been around long enough to know it’s not always going to be perfect. Obviously, I’ll take 100% blame on that play. you know, Nemo’s a new guy in front, played less than 10 games in the league and with me, and I’m active back there. I think it was a bit of miscommunication back there. There was a lot of game left. We’re a high-powered offense that you know you just got to stick with it, make saves and not let it get away from you.”

On what it’s been like since he’s taken over: “I’m very impressed with the level of professionalism all the players on our roster. We’ve asked everyone to up their work rate, we’re asking the team to play a certain style, a demanding style, and very happy the team is seeing results. That’s a good team character win. We didn’t score the first goal of the game, nobody hung their heads. We found a way to claw back and there wasn’t a lot of real estate out there. You had to fight for your space and those type of games are not easy to win. To see the effort level put forth by our players, that was very impressive.”
On Kailer Yamamoto’s goal: “What I liked about that play was it started from a pretty innocent-looking shot from Yamamoto, then it led to all that other stuff you’re referencing there. For me, that was some real skilled hockey players that found a way to make the difference when the game was on the line. That’s a credit to that line. I thought they were good all night.”
On Smith’s game: “He’s a competitive goaltender, someone who gives us a chance to win on a nightly basis. You talk about when the game’s on the line, you saw someone there really dig in and stand tall. I was very impressed with his demeanor, his talk with his teammates. He doesn’t wear a letter, but I think he’s a real leader on our team.”
On Connor McDavid’s game: “What I liked about his goal tonight was that it wasn’t just him, it was his line. Started with a great neutral zone forecheck, we picked one off. (Jesse) Puljujarvi picks one off, we go right back down the Kings’ throat and what I love — I love the skill play to knock the puck down. Then to see the bodies in front to score a May-type goal when we’re down 1-0… so for us to score that type of goal at that time, we needed it… He’s an impressive, impressive person to be around. If I was just circling back on things, I would say that type of game tonight, I think was important for our team. I really liked our patience level.”
On if Ryan Nugent-Hopkins is often overlooked in the market: “I don’t think he’s overlooked in where I think it matters most, which is in the dressing room. He’s someone who garners a lot of respect from his teammates, certainly from his coaching staff. I think most opponents know when he’s on the ice. He’s someone we’ve tasked with helming his own line and that line has been really good for us. It allows us to create mismatches which we think help our team win and we use him in every situation. We feel good when he’s on the ice. He’s been a real good hockey player, especially for my front-row seat over the last three games.”
Zach Laing is the Nation Network’s news director and senior columnist. He can be followed on Twitter at @zjlaing, or reached by email at zach@oilersnation.com.
Nation Takes
News
Oilers Talk
Post Game
Recent articles from Zach Laing