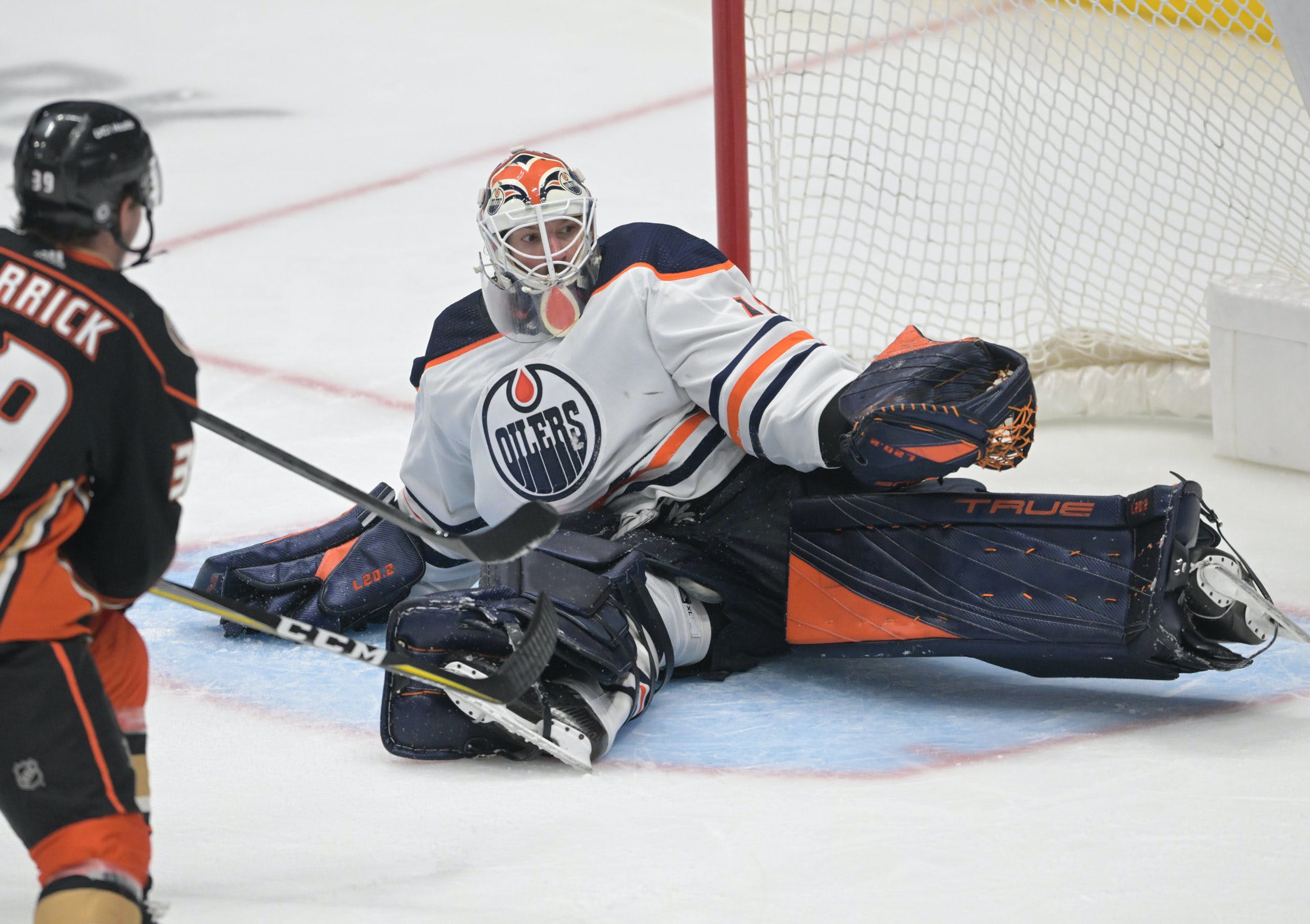 By Zach Laing
7 months ago
A nice night all around for the Oilers. Final score: 6-1.
Cooom has the Wrap Up here.

On what was more important, hitting the mark or getting a win on the road: “The win. (laughs) both obviously feels great. We’ve been really good at home, and we wanted to bring that on the road. Tonight was a great test for us, and I thought we handled it really well. Obviously on top of that, hitting a milestone… I’m happy about it.”
On it being another 50-goal, 100-point season: “Obviously I’m proud. I’m very happy about it, no question. It also shows you how great my teammates are, right? They’re the ones that put me in these situations, they’re the ones that get me the puck in the right moments. We have such a selfless group out there, it’s just fun to be a part of.”
On the Oilers being in the driver seat all night long, and if it shows what they’re capable of: “Yeah, absolutely. I thought the first couple minutes in the third we were a little too relaxed there. Other than that, it was a full sixty minutes there. Very solid road game for us. Schmiddy was amazing, our d were really good moving the pucks, great gaps. Our forwards did their job as well. It was a good win for us.”
On the Oilers going 10-2-1 in their last 13, the maturation of the team, and the growth of the team: “The growth comes from realizing the mistakes in the past, right? We’re all getting older, we’re all getting to a point where we want the same thing. This group has been through a lot of negative things, but it seems like we’re trending in the right direction. That’s great to see, fun to be a part of. Obviously, every game is big from here on out, so we’re looking to continue that.”

On how he felt in the game: “I felt great. I felt really good from the drop of the puck on. The team was outstanding. I think we did a lot of really good things. We’ve been preaching, talking a lot about how we want to play moving forward and I thought from start to finish we were really solid tonight.”
On if he felt it was the best all-around team performance in front of him this year: “Yeah, I mean we’re definitely trending in the right direction. We just want to keep building and get better in areas we’ve been talking about. We talked about playing a full-sixty tonight, and I think that’s as close as we’ve been to doing it this year. It feels good to get the lead, then keep pushing and kind of put them out of their misery a little bit there.”
On when he knew he was starting with Mikko Koskinen having a non-covid illness: “I got the call this morning, so I knew from this morning. Hopefully Mikko is not out too long and is feeling okay, but that’s just part of being ready to go. Little bit of a surprise, but that’s part of being a professional athlete. You got to be ready to go at any time. It was good to get back in there and get a big win.”
On how he feels he’s been able to build off each game: “Just the comfort level, getting into a bit of a rhythm, staying on top of my game when I’m not playing. I just want to be a part of the team success. It’s been fun, it’s been enjoyable to be around this group. They’re working hard, putting in time, you know, off the ice and in practice. It’s paying off in our games and it’s great to be around.”
On Draisaitl hitting 50g, 100p: “Unbelievable. This guy is just a workhorse out there. He’s an incredible athlete and obviously is a huge part of our team success. To score 50 goals in this league is a special feat. Couldn’t happen to a better guy. He kind of drives the pace for us, is obviously huge on the powerplay for us. Special player to play with and a better guy too.”
On if Draisaitl is a better scorer or passer: “I don’t know. I’ve never seen a player quite pass the puck like he does. He’s got a knack. His vision on the ice is incredible, he can pass it both on his forehand and backhand. It’s fun to watch some of the plays he makes. He’s got an incredible shot too. That goal he scored tonight, not too many guys can score from that angle. On nhl goaltenders. He’s a pleasure to be around for sure.”

On the game: : “I thought it was a good road win for our team. Felt like a month since our last road win. For us, we came out with a game plan of having everyone contribute for a full sixty minutes, and I thought it was a full sixty-minute effort for our team. It’s positive.”
On the cohesive play: “I thought it was a mature game. We weren’t in the business of trading chances or getting into a track meet. We started our game immediately and certainly as the game wore on we spent more time in the offensive zone. We were rewarded. I particularly liked our effort back to our own end and I think that’s a good sign for us moving forward.”
On Draisaitl hitting 50g, 100p: “Heckuva achievement. It’s so special to score 50 goals, and so special to hit the century mark on the points. I said this about Connor when he hit the 100 point plateau, I know Leon is driven to get our team to 100 points. That’s what motivates him and he did a lot of good things on the ice tonight. I was happy to see him get both of those late in the game.”
On Kulak-Barrie: “6 points, but also +9, which is a good sign for them. They made good plays with the puck. I thought they worked back to pucks quickly, they skated well, and they put the puck in their forwards hands. Both of them were able to get their shot through from the point, so I think when they’re going, it makes us a better team.”
On Smith: “Solid performance from mike. I think his puck movement on our breakouts was excellent. I thought he looked confident in net, he made a lot of really good saves, and a big factor in why we won the game tonight.”
On Draisaitl being banged up in the first: “Leon’s a big, tough guy. He plays through bumps and bruises and he had a little bit of a bump there, but it was never in doubt he would return. It was just a bruise. He’s a big strong guy who plays through those”
Zach Laing is the Nation Network’s news director and senior columnist. He can be followed on Twitter at @zjlaing, or reached by email at zach@oilersnation.com.
Nation Takes
News
Oilers Talk
Recent articles from Zach Laing