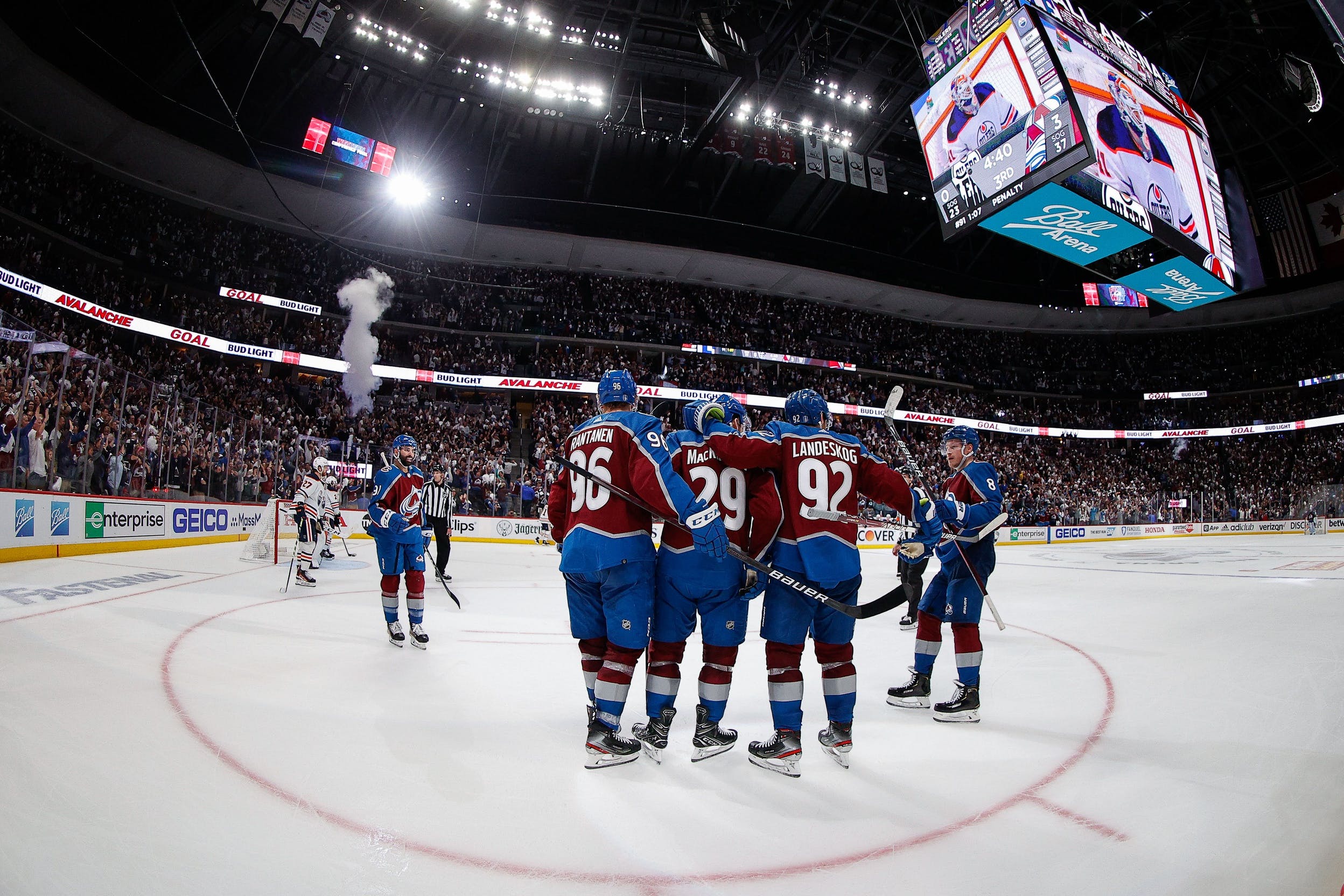 By Robin Brownlee
5 months ago
Sometimes the better team simply does what it takes to win and you have to tip your cap to them. Thursday in Denver was one of those nights as the Colorado Avalanche scored three goals in a span of 2:04 on the way to a 4-0 win over the Edmonton Oilers and a 2-0 lead in their Western Conference final series.
On a night when Colorado had to go with back-up Pavel Francouz in the crease because starter Darcy Kuemper was sitting out with an injury, the Avalanche turned nail-biter into waltz in the second period as Artturi Lehkonen, Josh Manson and Mikko Rantanen put pucks behind Mike Smith to break things open.
Francouz, who came in with modest career numbers in the post-season – a 3.34 GAA and an .891save percentage in nine games – took care of the rest with 24 saves. Instead of the loss of Kuemper providing the Oilers an edge in goal, there was no such thing. You could count the Grade A scoring chances the Oilers had on one hand with a couple fingers to spare.
That, in a final 40 minutes that saw the Oilers manage just 11 shots, was every bit as impressive as the 124-second outburst that put the Avs ahead to stay. That was the real flex in this game. Now, with Game 3 on Saturday at Rogers Place, it’s up to Jay Woodcroft and the Oilers to find a way to push back. 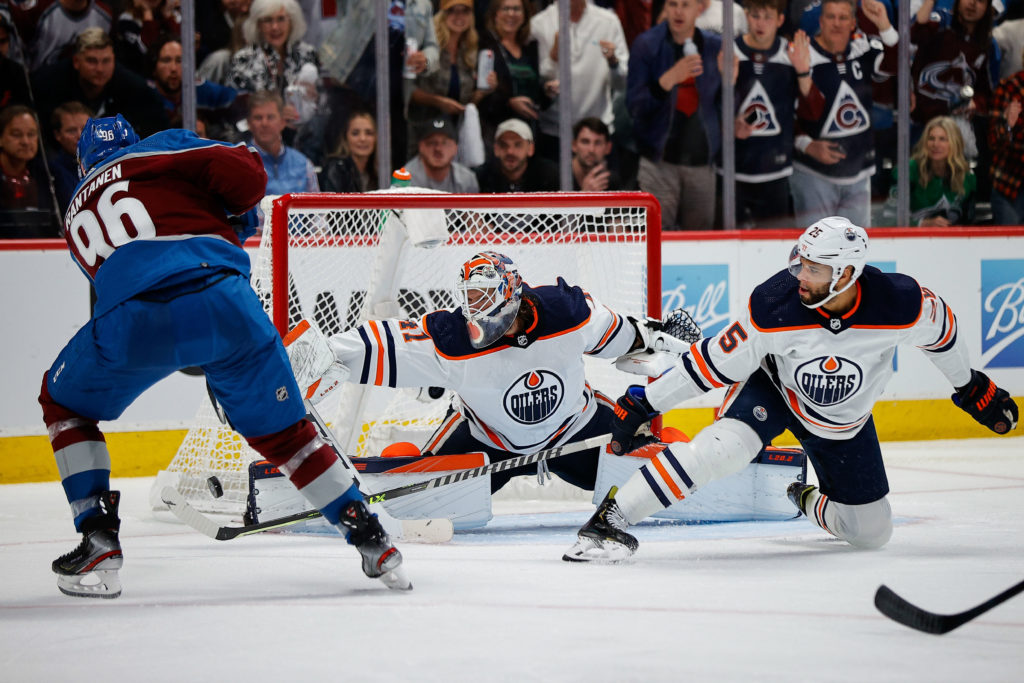 Jun 2, 2022; Denver, Colorado, USA; Colorado Avalanche right wing Mikko Rantanen (96) scores on a shot against Edmonton Oilers goaltender Mike Smith (41) and defenseman Darnell Nurse (25) defends in the second period in game two of the Western Conference Final of the 2022 Stanley Cup Playoffs at Ball Arena. Mandatory Credit: Isaiah J. Downing-USA TODAY Sports
“For sure you are a little nervous and have it in the back of your mind that it’s a really important game,” said Francouz, who got into 21 games playing behind Kuemper this season. “What helped me is the way our team played tonight. Right from the first seconds I knew they were going to help me a lot. That gave me more confidence to just focus on my play.”
Smith faced 40 shots, including 11 from Nate MacKinnon and four each from Lehkonen and Nazem Kadri. Leon Draisaitl led the Oilers with three shots while Connor McDavid and Evander Kane had just two each. Francouz didn’t have a lot of traffic or second shots to deal with.
“I think we’ve had chances. Not as much as we’d like, but we’re in the final four and the other team is doing some good stuff too,” said Woodcroft. We think there’s more to be had there. We can do a better job shooting the puck, shooting through structure. We’ll go back to the drawing board and we’re prepared to regroup and head home to friendly confines in Edmonton.”
“They have good players and good D-men,” said McDavid. “We haven’t had a ton of chances off the rush. We have to find a way to create off the forecheck and off O-zone play. They do a lot of good things, and we have to find a way to figure them out.” 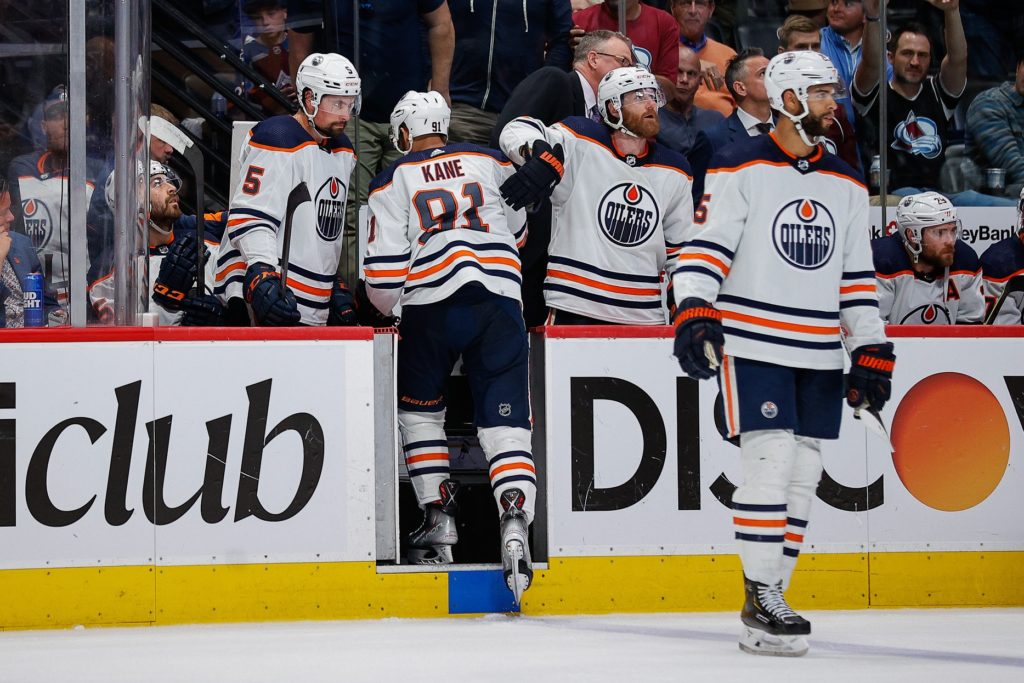 Jun 2, 2022; Denver, Colorado, USA; Edmonton Oilers left wing Evander Kane (91) exits the ice after receiving a penalty in the third period against the Colorado Avalanche in game two of the Western Conference Final of the 2022 Stanley Cup Playoffs at Ball Arena. Mandatory Credit: Isaiah J. Downing-USA TODAY Sports
If the Oilers manage that Saturday, we’ve got a series. If they can’t figure out the Avs, who’ve been a step ahead at almost every turn, we know how the story goes if the Oilers fall behind 3-0. “We’ve been a real solid home team for the last little while. We love playing in front of those fans and we’ll get ourselves back in this series at home,” McDavid said.
“We’re still a confident group,” said Zach Hyman. “It’s a series, right? This is how it goes, there are momentum swings, it’s a rollercoaster. They defended home ice, so we have an opportunity to go back home, feed off the crowd and get the momentum back.
“I think we’ve done a really good job playing at home and we’ve done a good job throughout this year when our backs are against the wall, we’re facing adversity and pushing back. This is a big opportunity for us to do that.”