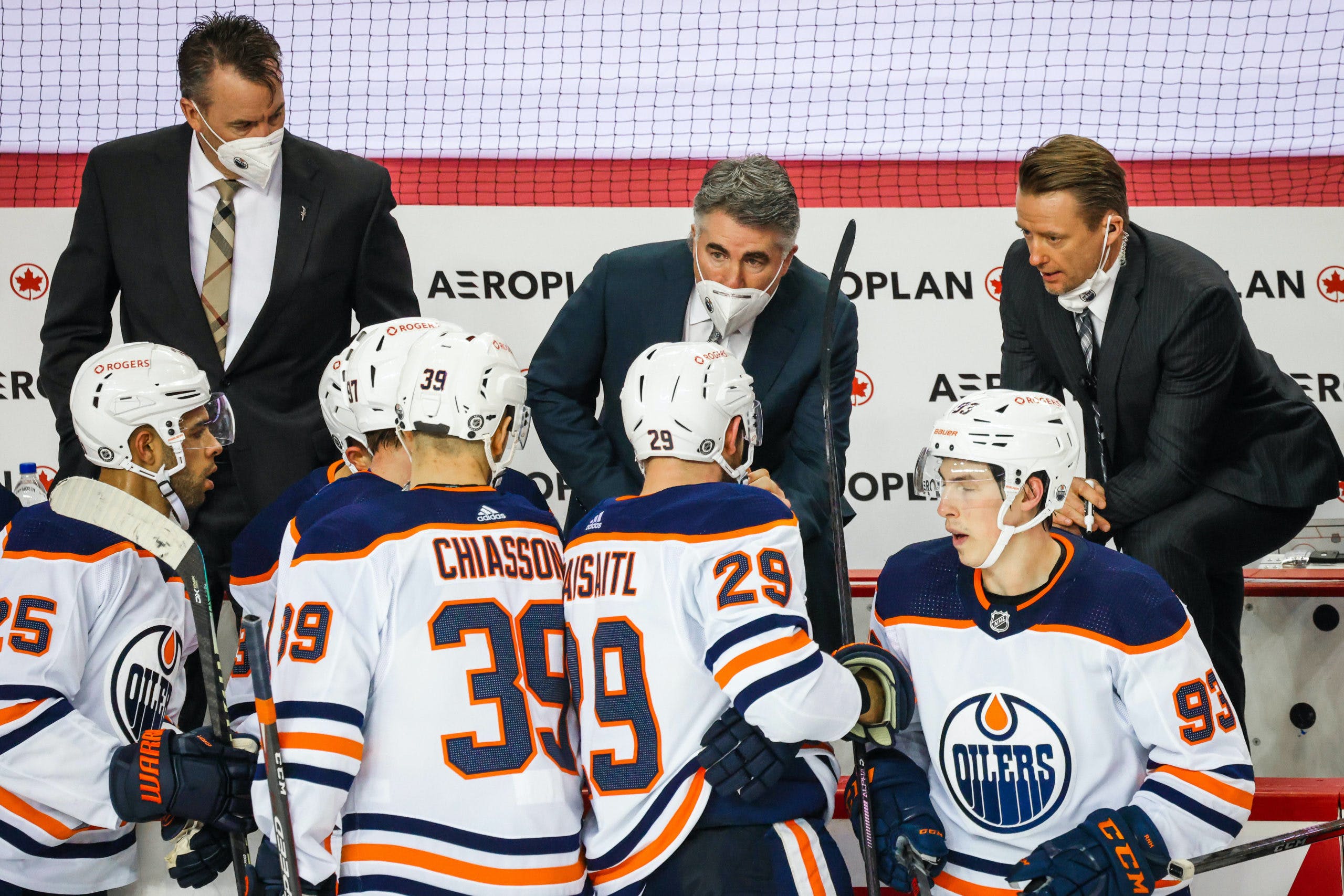 By Jason Gregor
1 year ago
This past season @Connor McDavid led the NHL in 5×5 scoring and Leon Draisaitl was fourth, but despite their dominance at five-on-five the Oilers top-six wingers did not produce very much. That shouldn’t be the case this season as head coach Dave Tippett has more offensive options to choose from than he, or any Oilers head coach, has had in 15 years.
With the addition of @Zach Hyman and @Warren Foegele, along with the potential of Dylan Holloway, the battle for ice time among top-six forwards will intensify. And Tippett has many line combinations to consider.
@Jesse Puljujarvi, @Kailer Yamamoto, @Ryan Nugent-Hopkins will need to produce more than they did last season. Puljujarvi was the most effective of the three, and he has the potential to have a breakout offensive season.
Last year McDavid had 56 points at 5×5 and Draisaitl scored 40, but the wingers didn’t produce as much as they should have while skating with elite offensive producers.
Puljujarvi had 19 points, which was 136th among NHL forwards.
Yamamoto was 170th with 16 points.
Nugent-Hopkins was 220th with 14 points.
Dominik Kahun was 255th with 12.
Puljujarvi was quite consistent once he was promoted with McDavid. He was excellent on puck retrievals, and became a solid finisher. For me, he was easily the Oilers third best forward. I see him as a lock to start in the top six. Same with Nugent-Hopkins, but it might be at wing or centre. More on that later.
Yamamoto could battle Zack Kassian for ice time in the top six.
In 2019, Kassian produced 23-22-45 in 82 games at 5×5. He was incredibly productive, however, in his 47 regular season games since January, 2020, Kassian struggled. Yamamoto was excellent in 2020, when after being recalled from the American League he produced 21 points at 5×5 in 25 games. He, along with Draisaitl and RNH, were a dynamic line. But in his final 41 games last season Yamamoto only produced 3-7-10, and he played mainly with Draisaitl.
Both Kassian and Yamamoto have shown they can produce great numbers at 5×5, but they’ve also showed they can struggle. This season, if both can remain healthy, there should be a healthy competition for ice time.
Hyman had 23 points at 5×5 last year, playing 50% of his minutes with Mitch Marner and Auston Matthews, while Foegele scored 18 playing with a variety of different wingers. He did play 63% of his time with centre Jordan Staal. Those two give Edmonton much more offensive depth at 5×5. 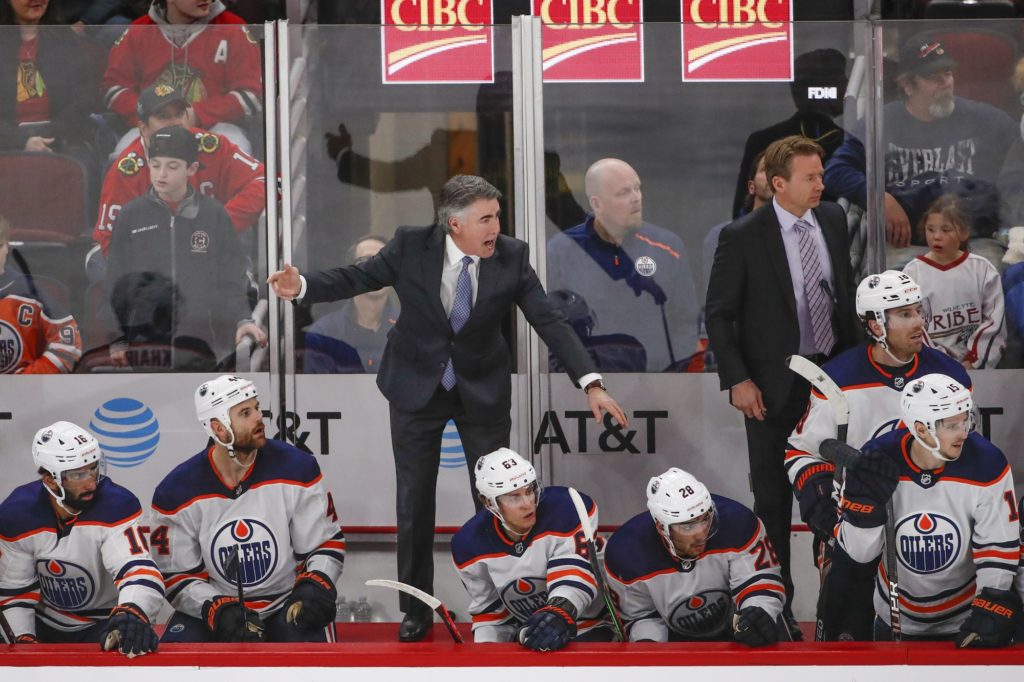 Mar 5, 2020; Chicago, Illinois, USA; Edmonton Oilers head coach Dave Tippett directs his team against the Chicago Blackhawks during the third period at United Center. Mandatory Credit: Kamil Krzaczynski-USA TODAY Sports
I sense Tippett will use preseason to try multiple combinations, and because he has more proven wingers, he could revisit his most deadly combo of McDavid and Draisaitl. Kassian produced incredibly well playing with those two in 2019, and Yamamoto is also an option to play the right side with them.
Then he could run a second line of Hyman-RNH-Puljujarvi and a third line of Foegele-Ryan McLeod-Kassian.
Or he could split up his two superstars, like he did much of last season, as McDavid played with Draisaitl for 36% of his 5×5 TOI. He could run McDavid, Draisaitl and RNH down the middle.
Holloway-McDavid-Puljujarvi
Hyman-Draisaitl-Yamamoto
Foegele-RNH-Kassian
Or he could try different trios from the aforementioned nine skaters. Or Ryan McLeod plays well and one of the wingers is out of the top-nine. Also Hyman shoots right and can play the right side as well.
For the first time since 2006, Edmonton will have legitimate competition in the top six, and even the top nine. I wouldn’t write off any of the 11 skaters I mentioned. Another name to watch is Kyle Turris. Turris has been working incredibly hard off the ice and I suspect Tippett will try him on the wing this season. Turris’ best attribute is his shot, and in preseason I envision him on the wing with a skilled centre. He will have to show Tippett he has rediscovered his game, and he will need to do it on the opening day of training camp.
I don’t expect Tippett to pigeonhole any players on day one of camp. Foegele doesn’t have to only be a third line left winger. Yamamoto isn’t guaranteed the second line RW spot, while Kassian slots in on the third line. Holloway will be given an opportunity to show he is ready. Many scouts I’ve spoke with feel he could step in and play right away. But, unlike in previous seasons, the Oilers won’t have to give him a young player top-nine minutes if he isn’t ready.
They have depth.
Edmonton scored the ninth most 5×5 goals in the NHL last season, despite having only three forwards reaching double digits in goals.
Mcdavid (19), Draisaitl (13) and Puljujarvi (11) accounted for 47% of the 5×5 goals scored by forwards. They had 43, the rest of the forwards scored 48.
Edmonton’s blueline scored 24 goals, tied for second most in the NHL, with Darnell Nurse producing 12 of them. Oilers blueliners scored 20.8% of Edmonton’s goals at 5×5 last season.
Vegas led the NHL with 135 goals and they got 29 (21.5%) of them from their blueline. Dallas finished 24th in 5×5 goals, but their blueline scored 24, which was 23.7% of their offence. The highest percentage of any team.
Luckily for the Oilers, their blueline, specifically Nurse, produced a lot at 5×5 and that covered up for the lack of goal-scoring production from Yamamoto, RNH and Kahun at 5×5. With the new additions and high probability RNH and Yamamoto can produce more this coming season, Edmonton won’t have to rely on its defense to score as often. But if the D-men continue to score, the Oilers should be a top-five team in 5×5 offence.
Vegas (135), Toronto (132), Colorado and Washington (131), Pittsburgh and Minnesota (126), Florida (118), New York Rangers (116), Edmonton (115) and the New York Islanders (113) finished in the top-ten last season. Edmonton averaged 2.05 5×5 goals/game last year, and if they can produce 2.25 this season they will likely finish close to the top-five.
Offence should not be an issue for Edmonton, in fact, it should be a massive strength and the competition for spots in the top nine will be intense, and filled with a few surprises.
Which lines do you think Tippett will run on opening night?