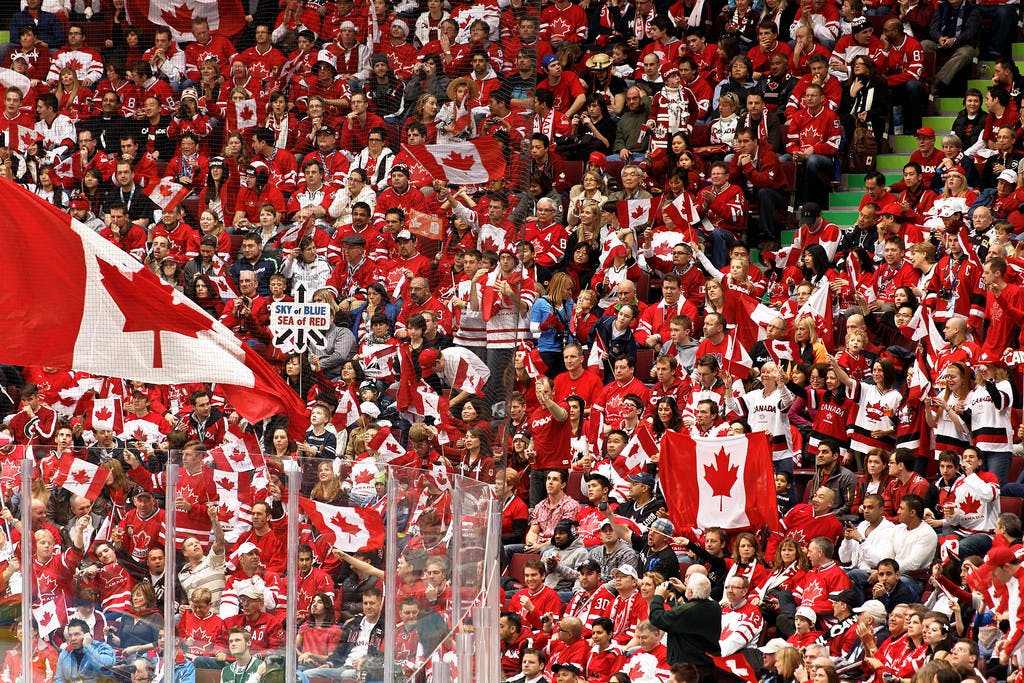 By Jason Gregor
1 year ago
It is official. NHL players will be participating in the 2022 Winter Olympics. The men’s hockey tournament will run from February 9th to the 20th. The National teams will submit their “long list” of players by October 15th and the provisional playing rosters will be announced in January, 2022. Unlike previous Olympics, there will be no orientation camps prior to the Games, but teams will be able to meet virtually.
John Hoven was the first to post the letter the NHLPA sent out to their members. And you can read all the details below.
Reading the rules it is clear the NHL’s top players wanted to go. Those who play will need to be fully vaccinated, stay in a tight bubble while in Beijing, won’t be insured (covered) by COVID insurance and might not have any guests allowed. They agreed to all of this, because they really wanted to play. That is great. It will be wonderful to see best-on-best once again in men’s hockey.
The competition to make Canada’s roster will be fierce, and it is never too early to project who makes the final roster.
The “long list” will live up to the name. Don’t be surprised to see 70+ players on Canada’s list. It is a list, not a camp, and with potential health issues I see no reason why they wouldn’t have 70-100 players. For instance, what if a young player like Alexis Lafreniere gets off to an incredible start, but wasn’t on the October list. I’d be surprised if the list is only 40-45 players. So instead of looking at the long list, here is who I have on the roster, or battling for a spot. 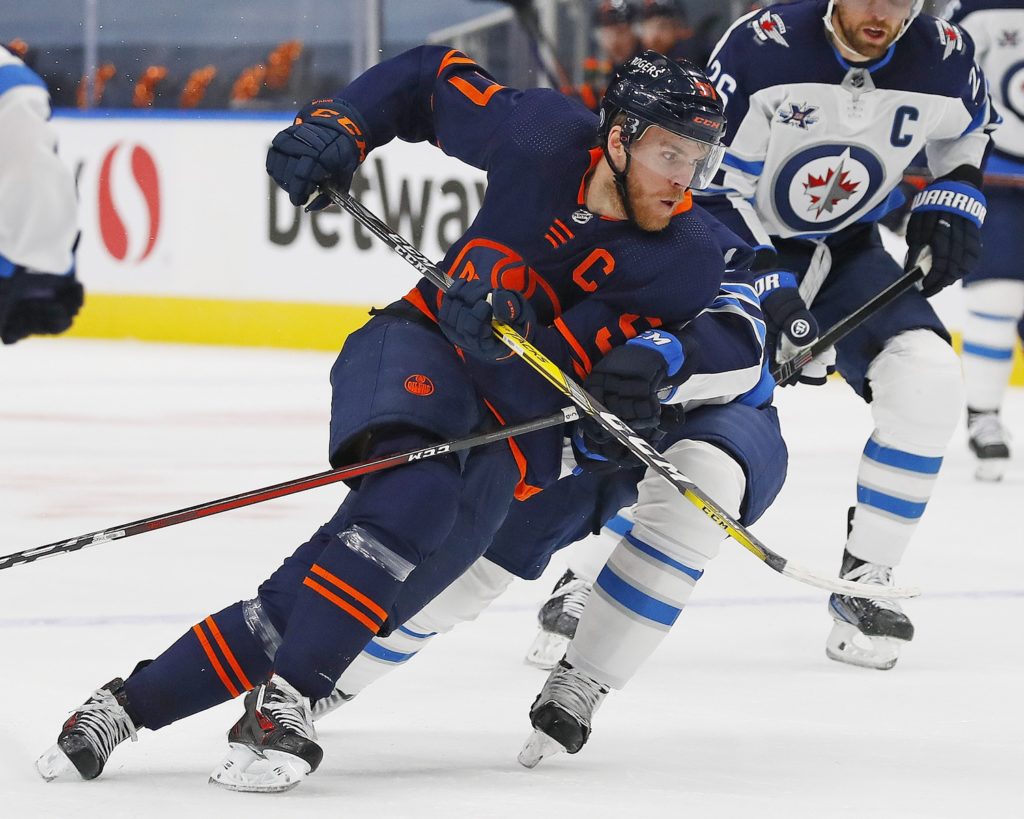 May 19, 2021; Edmonton, Alberta, CAN;Edmonton Oilers forward Connor McDavid (97) moves the puck around Winnipeg Jets forward Blake Wheeler (26) during the first period in game one of the first round of the 2021 Stanley Cup Playoffs at Rogers Place. Mandatory Credit: Perry Nelson-USA TODAY Sports
The 2022 Olympic team will look much different than the roster we saw in 2014; the last time NHL players were performed at the Olympics. Sidney Crosby, Patrice Bergeron, John Tavares, Drew Doughty, Alex Pietrangelo and Carey Price look to be the six with the best chance to make the 2022 team.
Even the 2016 World Cup roster, which didn’t include many of Canada’s top young guys (they played for Team North America), won’t have many players on the 2022 team. Outside of the six from the 2014 Olympic team, Ryan O’Reilly and Brad Marchand are in the mix for next February’s team.
There will be many Canadian players skating in their first Olympics and that makes the tournament more exciting from my vantage point.
The following forwards will be on the team. The only reason I see them off is due to injury.
Connor McDavid, Nathan MacKinnon, Jonathon Huberdeau, Brayden Point, Mitch Marner, Marchand and Crosby. So that leaves seven spots.
Patrice Bergeron is very likely on the team, but he is 36 years of age and due to Canada’s depth at centre I don’t see him as a lock today. Very good chance he makes it, but not a lock like the seven above.
Which leaves some really good players battling for six, possibly seven spots. Among those forwards: Ryan O’Reilly, Sean Couturier, Mark Schiefele, Mark Stone, Steven Stamkos, Matt Barzal, Taylor Hall, Bo Horvat, Tyler Seguin, Brendan Gallagher and Tavares.
Others who could enter the mix if they are playing well early this season include Sean Monahan, Sam Reinhart, Jamie Benn, Ryan Strome, Travis Konecny, Ryan Nugent-Hopkins, Brayden Schenn, David Perron, Jonathon Toews, Nick Suzuki and Phillip Danault.
If Zack Hyman is lighting it up playing with McDavid, he could find himself in a similar position as Chris Kunitz in 2014. It is about building the best team, and players who can produce at 5×5 are important which is why I included Gallagher in the first group. Maybe a youngster like Lafreniere comes flying out of the gate and puts himself in the conversation. 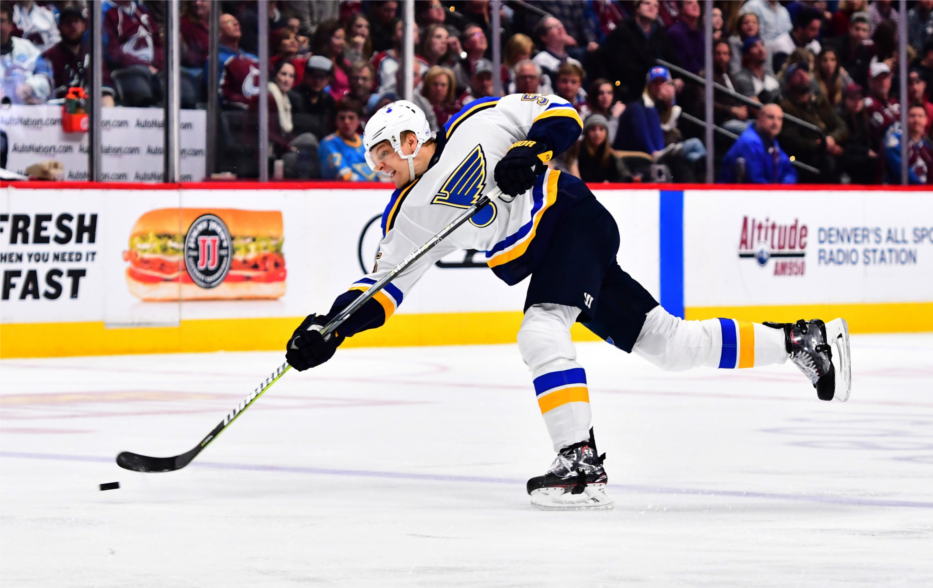 I have Pietrangelo and Cale Makar as locks on the right side (assuming they are healthy). Which leaves Dougie Hamilton, Drew Doughty, Aaron Ekblad, Colton Parayko, Brent Burns, Ryan Pulock and Mackenzie Weegar battling for the other two RD spots.
On the left side, today I see Shea Theodore, Thomas Chabot, Darnell Nurse, Morgan Reilly, Devon Toews, Jakob Chychrun, Mark Giordano, Adam Pelech and Jake Muzzin as the front runners.
Recently, Hockey Canada management and coaches have leaned towards L-R pairings, but there is always a chance they move someone to their off-side.

I see Price and Marc-Andre Fleury as the front runners right now. Experience in goal will matter and both have played in big games on the  NHL and International stage.
Mike Smith was the third goalie in 2014, behind Price and Roberto Luongo, so I don’t buy they will go with a young guy as the third goalie. They will bring whoever they feel is the best option.
Jordan Binnington, Darcy Kuemper, Jake Allen, MacKenzie Blackwood and Carter Hart are some options. What if Adin Hill is playing great in San Jose or Cam Talbot is solid again in Minnesota? They could be the mix. I think it will come down to who is playing great. If Smith continues his stellar play from last season, he’d might in the conversation as well.
I do think the top two spots are Fleury and Price’s to lose.
Having NHL players back in the Olympics is great. We haven’t had a best-on-best since 2014. The 2016 World Cup was still exciting, but it didn’t have the same excitement due to team Europe and team North America. I understood why they did it, but having the best players representing their respective countries is the best scenario.
Are there any players I didn’t mention who you think could get a look?
Who are your top-six defenders?
Would you play McDavid with MacKinnon? I would start the tournament with them on the same line. It would be unreal to watch their speed together. 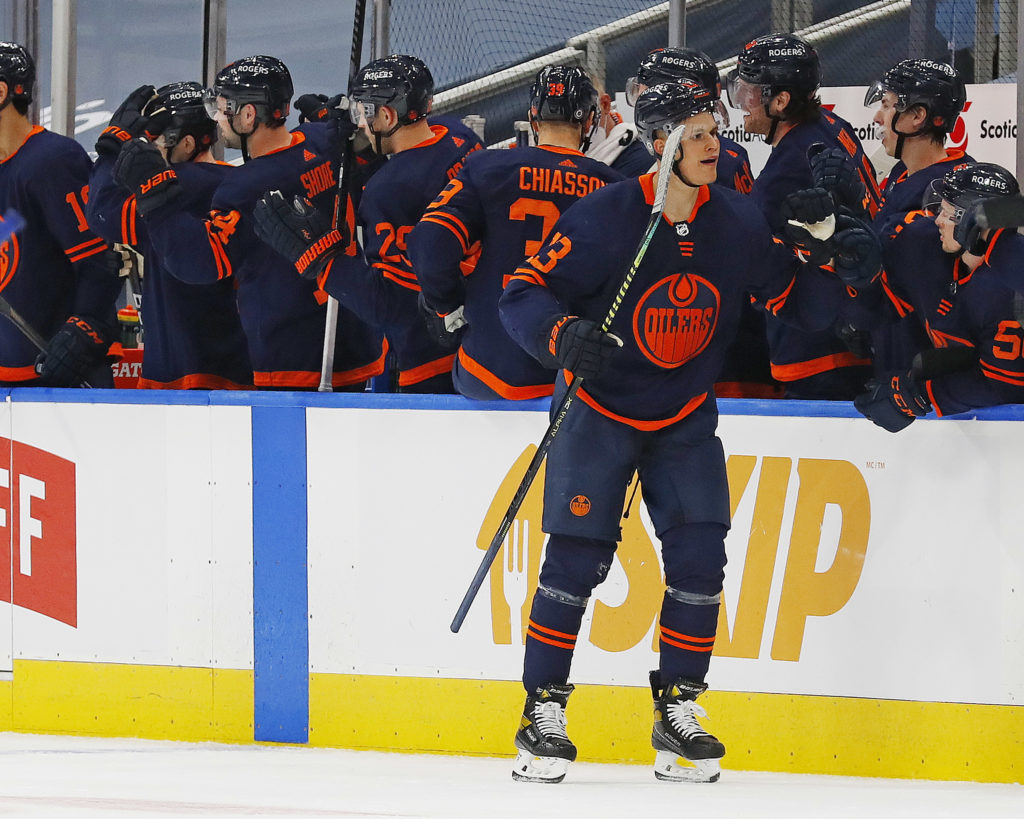 May 8, 2021; Edmonton, Alberta, CAN; Edmonton Oilers forward Jesse Puljujarvi (13) celebrates after a second period goal against the Vancouver Canucks at Rogers Place. Mandatory Credit: Perry Nelson-USA TODAY Sports
Jesse Puljujarvi will be on Finland’s long list and I think he has a great chance to make the team because I’m expecting him to take another positive step in his play this season. He was 6th among Finnish players in goals last year.
Dylan Holloway is still recovering from his wrist surgery. He will have another meeting with the Oilers doctor next week to decide if he will partake in rookie camp on the 15th. They don’t want to rush him back, so that is something to monitor.