Coming Together and Winning the Division 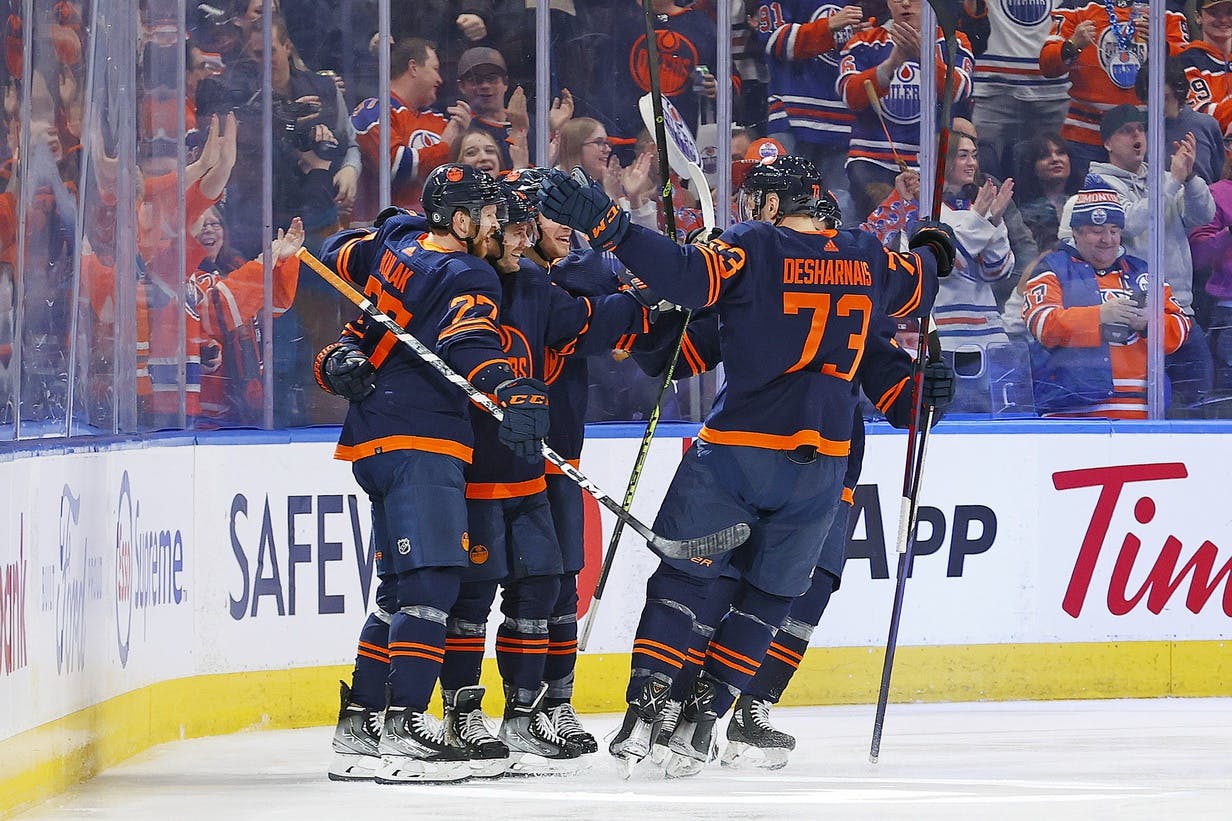 By Tyler Yaremchuk
11 days ago
The wins keep coming for the Edmonton Oilers and the team is starting to play a lot more like the way we thought they would at the start of the season. Grabbing six straight wins is impressive regardless of who your opponents are but the Oiler’s heater has featured more than a couple of wildly impressive performances.
First, it was a 4-3 victory over the Vegas Golden Knights. The Oilers rolled into T-Mobile Arena for their fourth road game of the week, playing on the second of back-to-backs, and largely outplayed the then-division-leading Golden Knights. It was one of their better 5v5 games of the year in my opinion and they started strong as well, which is something they really struggled with early in the season.
Then they returned to home ice and beat the then division-leading Seattle Kraken in relatively convincing fashion, outscoring them 5-1 at 5v5. Natural Stat-Trick had the 5v5 scoring chances at 29-15 in that game as well. They also won a thrilling game against the Tampa Bay Lightning last week. A game in which they came out of the gates hot, which they rarely did earlier this season, and showed a strong ability to push through adversity against one of the best teams in the league.
There are a lot of really positive signs to sort through but perhaps none are bigger than the situation between the pipes.
Jack Campbell has been outstanding throughout this stretch and his turnaround came at t a time when they really needed it. With Stuart Skinner stepping away from the team for close to a week because of the birth of his first child, Campbell had to take on the entire workload and he didn’t just survive, he thrived. He’s now won six straight starts and has had at least a .900 save percentage in every single one of them.
The most impressive performance was the game against Vegas when he was given the start for a second night in a row. That’s usually a situation that sinks a lot of goaltenders but he managed to stop 27 of the 30 shots he faced and made some key stops late. The Oilers don’t win that game if it were not for Campbell.
Newly named All-Star Stuart Skinner has since returned and looked strong in his first game back, posting a .931 save percentage in the team’s most recent win against the Canucks. Suddenly, Jay Woodcroft has two goalies who he can trust.
It hasn’t just been one area of the team’s game that’s turned around though. They’re playing much better at 5v5 compared to what they were early in the season.
They are shooting the puck more, they’re preventing shots better, and their goaltending has improved. All of that has led to them surging up to the top ten in both five-on-five scoring and goal prevention. It’s a turnaround that is very similar to what they went through last season and here’s the really encouraging part: the team managed to keep up their strong level of play for almost three months last season so there is reason to believe that this turnaround will be more than just a flash in the pan. This could be the new Oilers.
Enough with the stats and numbers though, that’s kind of boring. You know what else is really impressing me right now? The way the Oilers are suddenly playing like a tight-knit group.
They’re standing up for each other and I am absolutely loving it. Remember a few weeks ago when MacKenzie Weegar knee’d McDavid and no one did anything about it? Well, compare that to what happened when Patrick Maroon took down #97. It’s night and day.
How about big, bad Vinny Desharnais going after Keegan Kolesar a few periods after he took a run at Leon Draisaitl? That stuff just wasn’t happening earlier in the season and the fact that it is now is a very encouraging sign. It shows that this team is starting to come together as a group and I think that can only help fuel them down the stretch.
Things like big goal celebrations, being willing to get into scrums after the whistle, and even dropping the gloves might seem trivial or silly but I’m telling you they’re important. They’re the sign of a healthy locker room and the sign of a team that wants to play for each other.
The Oilers are starting to come into their own and that is bad news for the Pacific Division. The Oilers are suddenly sitting third in the division based on points percentage and they’re just three points back of the Vegas Golden Knights with the same number of games played.
With Vegas and Los Angeles both sputtering right now and the Oilers staring down a stretch that will see them play seven straight teams that are out of the playoffs, there is a legitimate chance Edmonton is sitting in the top spot in the division by the middle of February and that is not something that I thought would have been possible a month ago.
Giddy up Nation Citizens, it’s going to be a fun few months in Edmonton.
Editorials
Featured
Oilers Talk
Recent articles from Tyler Yaremchuk