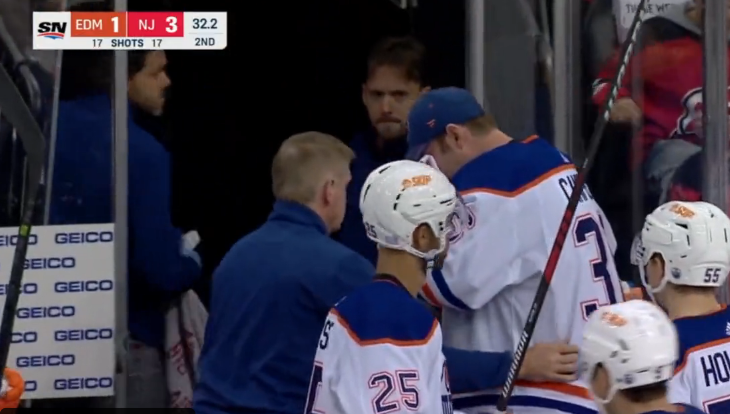 By Zach Laing
17 days ago
Edmonton Oilers goaltender Jack Campbell’s tough season got even tougher Monday night.
While sitting on the bench backing up Stuart Skinner in the Oilers’ 5-2 loss to the New Jersey Devils, Campbell got hit in the face by a deflected puck. Oilers teammate Dylan Holloway tried to dump a puck into the offensive zone, but Devils defenceman Dougie Hamilton tried to bat it down, but it changed direction and clipped Campbell.
Campbell got a towel from the training staff right away and appeared to be holding his face just under his left eye. The Oilers had an emergency backup, George Blinik, ready to go, but he wasn’t needed.
After the game, Oilers head coach Jay Woodcroft had no updates on Campbell’s condition. Teammate Stuart Skinner, however, said Campbell had a bloody nose and was joking around with him. Skinner said that he was okay.
Since signing his five-year, $5-million AAV deal things have been rough for Campbell. Despite starting the year 6-4, he’s posted a .873 save percentage, 4.27 GAA while allowing 10 goals more than expected.
He’s bound to find his game at some point, but in the meantime, the team seems to trust in Skinner.
Zach Laing is the Nation Network’s news director and senior columnist. He can be followed on Twitter at @zjlaing, or reached by email at zach@oilersnation.com.
Featured
Nation Takes
Oilers Talk
Recent articles from Zach Laing