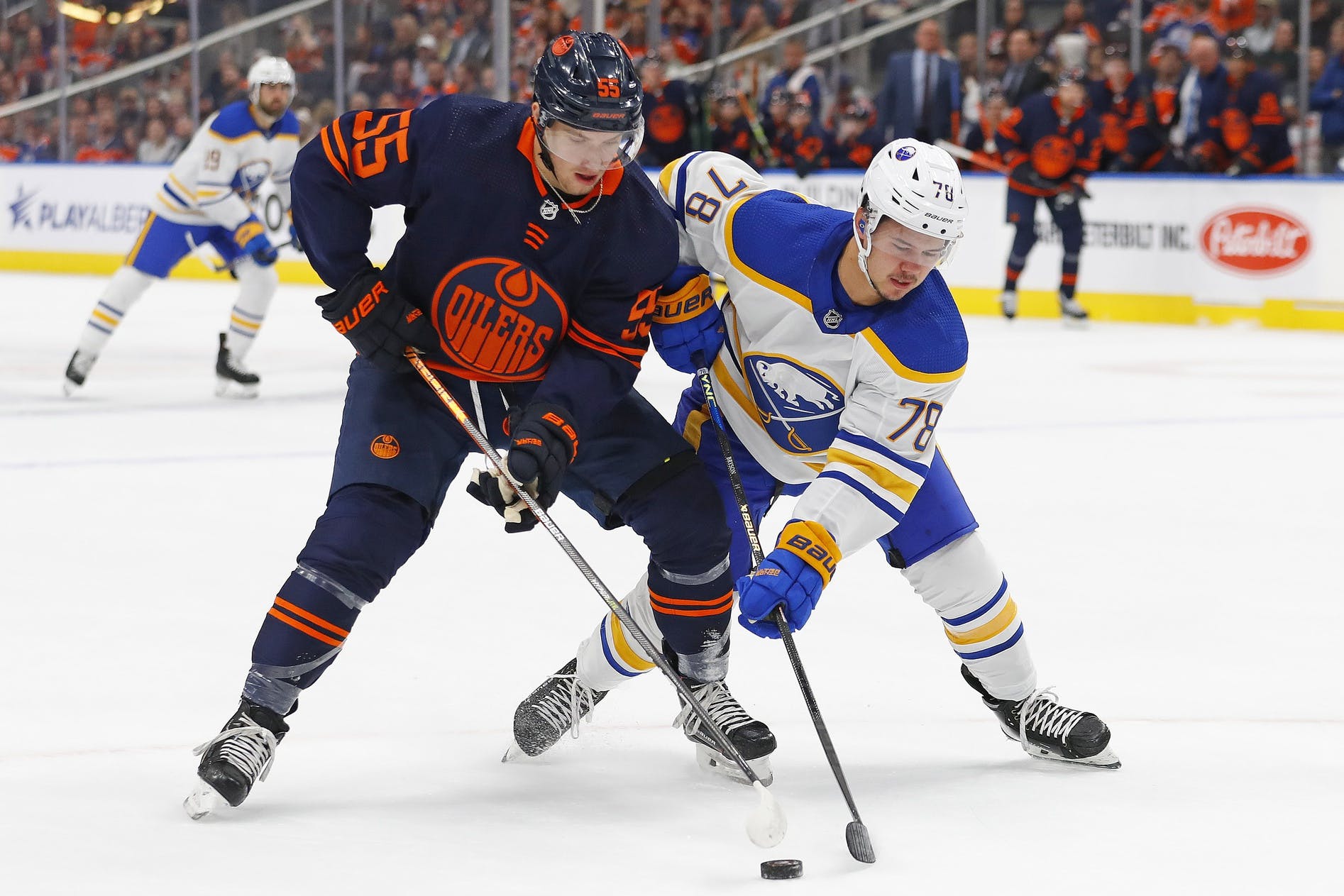 By Tyler Yaremchuk
1 month ago
Darnell Nurse came out after last night’s loss and said that this team can’t accept moral victories, even though it’s early in the season.
“Anytime you lose, there is no satisfaction in this room, there are no moral victories,” said the blueliner.
That is exactly the take that you would hope a player would have following a frustrating loss. The Oilers absolutely peppered Sabres backup Eric Comrie, throwing 48 pucks on net, but they only found the back of the net once. I can’t imagine that dominating a game at 5v5 and still losing is fun and that’s exactly what the Oilers went through last night as they dropped their second straight game on this homestand.
It wasn’t like the Oilers were just throwing pucks on net from bad angles and making Comrie look good either. They were going to high-danger areas, they just couldn’t solve Comrie.
Here’s the heat chart from Natural Stat-Trick: 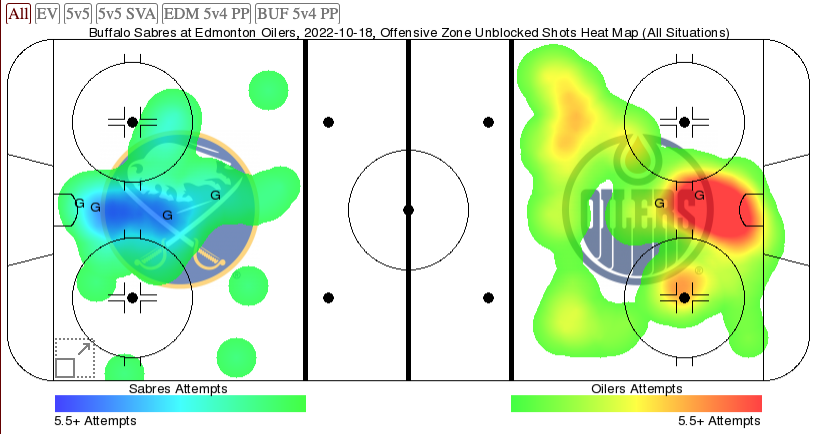 So while I love that the loss isn’t sitting well inside the Oilers locker room, I think from an outside perspective we can look at that game and kind of just accept that sometimes in hockey, the other team’s goalie just steals one. That’s what happened last night.
Could the Oilers stars have finished off a few more of those chances? Sure. Could their powerplay have grabbed them a big goal? I guess, although the powerplay more or less singlehandedly pulled them to victory once already this season.
At the end of the day, if the Oilers put up 40+ shots on goal on a routine basis, they’re going to win a whole hell of a lot more than they’re going to lose.
Losing to a team like the Sabres, who are just hoping to get a sniff of what it’s like to be in a playoff race, is always frustrating and it’s not fun watching those points slip away but that was the best that the Oilers looked at 5v5 in any of their three games. They controlled play, granted they did it against their weakest opponent and dominated the possession battle at even strength. If they bring that kind of effort for the rest of this home stand, they’ll be fine.
In the moment, it’s frustrating. Seeing Zach Hyman and Evander Kane miss on a handful of great scoring chances rightfully drives fans mad, but, Hyman was their hardest worker through two games and Kane is a guy who scored at a 40-goal pace last season. When we look back on this season, I really don’t think we’ll remember this loss to the Sabres as being one of consequence. Those two players will be fine.
There are good losses and bad losses. Heck, there are good wins and bad wins. The Oilers opening night victory was an incredibly fun game to watch but the Oilers got outplayed at 5v5 and only won the game because the Canucks special teams were junk and the Oilers’ elite powerplay flexed its muscles. There’s nothing wrong with that either, the Oilers’ powerplay will steal them plenty of games this season, but there’s also nothing wrong with pointing out that the Oilers’ only victory this season wasn’t exactly a masterpiece.
This team is not playing perfect hockey to start the season, far from it. They aren’t getting enough 5v5 production from any parts of their lineup, their blueline is prone to making a handful of ‘Grade A’ mistakes on a nightly basis, and their $5 million goaltender hasn’t gotten off to the start that he’s wanted to.
Still, there is no reason to panic here. McDavid and Draisaitl will find a groove, I still believe the top nine on this team is capable of being one of the best in the league, and the duo of Campbell and Skinner is more than capable of bringing this team to the playoffs. The concerning parts of their game so far this season, with the exception of the blue line, are all areas I think will bounce back in short order.
The only team in the NHL that should be panicking right now is the Vancouver Canucks. YIKES. They’re setting NHL records for all the wrong reasons to start the season and honestly, I wonder if we won’t see a coaching change in the next 7-10 days if they don’t start turning things around here.
From an Oiler’s perspective, what’s slightly more concerning than their 1-2-0 start is the fact that both Vegas and Calgary look really damn good to start the season. The Pacific Division might be a little bit tighter than I thought it would be. Giddy up Oilers fans, because this might just be another roller coaster of a season.
Editorials
Featured
Oilers Talk
Recent articles from Tyler Yaremchuk