By Robin Brownlee
1 year ago
Even with Sidney Crosby not being the player he once was and his Pittsburgh Penguins likewise diminished, Wednesday’s match-up for the Edmonton Oilers made me nervous. When I looked at the Oilers’ blue line, shot full of holes by injuries and illness, I was immediately doubtful.
Before the opening face off, I opined on Twitter that if the Oilers were to win with this blue line group in front of Mikko Koskinen, it might take five goals to make it happen. As good as they’ve been with a 15-5-0 record coming in, I didn’t know if the Oilers could handle even a faded Sid and a team that’s beaten them for fun in recent years with three blue line regulars out.
Well, sure enough, the Oilers scored five goals even though they didn’t need them, the defence and Koskinen held up and coach Dave Tippett created a spark when he tweaked his lines after 40 minutes of a disjointed effort on the way to a 5-2 win. All this in a game the Oilers had every reason to lose but didn’t — a game that too often would have gone the other way in years past.
Finding a way to win against the odds instead of phoning it in with a built-in excuse is just as impressive as the record, and it might serve the Oilers better down the road when it matters most than the numbers do now. That’s the end game everybody is looking for. 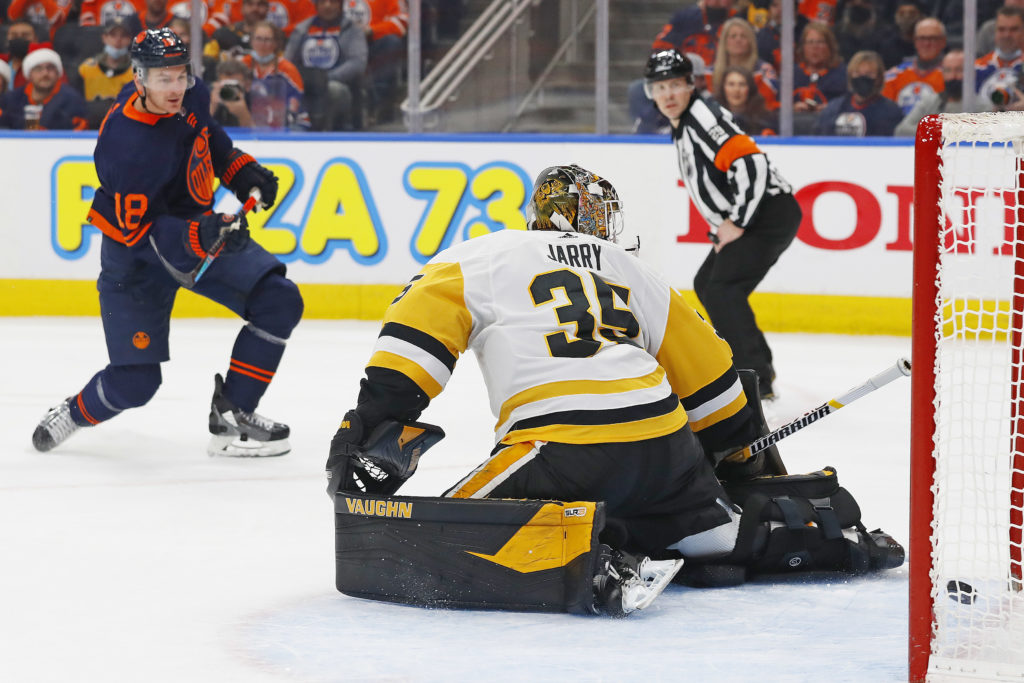 Dec 1, 2021; Edmonton, Alberta, CAN; Edmonton Oilers forward Zach Hyman (18) scores a goal against Pittsburgh Penguins goaltender Tristan Jarry (35) during the first period at Rogers Place. Mandatory Credit: Perry Nelson-USA TODAY Sports
With Darnell Nurse, Duncan Keith, Slater Koekkoek and Cody Ceci out, it was Philip Broberg, William Lagesson and Markus Niemelainen, in his NHL debut, dressed along with Tyson Barrie, Kris Russell and Evan Bouchard. Even a middle-aged Sid would shred this group, no? Well, no — although there were more than a few anxious moments.
Aside from Zach Hyman, who scored the first two goals for the Oilers, and Connor McDavid, who set both of them up, Tippett’s team didn’t have much going in the first 40 minutes. They hung around, 2-2 at the second intermission, thanks to Koskinen and Hyman’s drive and hustle. That prompted Tippett to drop Zack Kassian from the first line with Kailer Yamamoto taking his spot. Jesse Puljujarvi moved up along Leon Draisaitl.
“We should have a few of our players stop looking at the iPad and start looking at Hyman out there,” offered Tippett. “He plays the game honest. He plays the game hard.”
Yamamoto scored what would stand as the winning goal on a deflection to make it 3-2 in the third period. On a night Crosby finished minus-4 and wasn’t even the best player on his team, let alone the planet, McDavid had four points. He set up Bouchard to make it 4-2 and scored into an empty net for the 5-2 goal.
“We were better in the third,” Tippett said. “We turned the puck over far two much in the first couple. Just couldn’t get any, no rhythm to our game whatsoever. Just batting it around like it was a tennis ball. Once we got to work, we still turned it over a few times, but at least we worked to get it back in the third. That’s the difference.”

The lone face-palmer in the final 20 minutes was Hyman seeing what would have been the first hat trick of his career negated by an offside (Yamamoto) on review. Hyman was also right with McDavid on his empty-net goal, trailing behind, but with a defender between them, McDavid didn’t have a chance to get him the puck.
“He had no chance to get it to me,” smiled Hyman, who has 11 goals in his first 21 games with the Oilers. “I told him, put it in, finish the game and we’ll get another one another time.”
Flaws and all, the Oilers jump a jet for a game in Seattle Friday at 16-5-0. They’ve got another two points in the books and another lesson about how to win games even when you’re not at your best tucked away in the memory banks. This is how you do it.