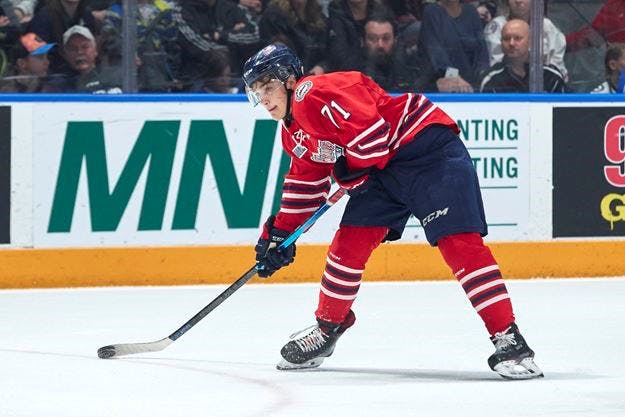 By Liam Horrobin
1 year ago
There’s plenty to discuss on this week’s edition of the Oilers Prospect Report, so let’s waste no time and dive into the thick of it.

It comes with no real surprise, but the Oilers 22nd overall pick from the 2021 NHL Draft, Xavier Bourgault, has been selected for Team Canada’s World Juniors camp this month. Bourgault has dominated the Quebec Major Junior Hockey League with 17 goals and league-leading 33 points.
The biggest surprises, though, are the snubs. Outside of the Oilers organization, Brandt Clarke was the most notable admission and a couple of others like Matthew Savoie and Brennan Othman. Also missing from the list were Matthew Savoie’s older brother Carter and Oshawa Generals forward Tyler Tullio.
Carter Savoie has put up great numbers in the NCAA for the University of Denver. The sophomore leads with 11 goals and 19 points in 12 games. He’s also top 15 in the NCAA points race and 5th in goals.
As for Tullio, out of the seven OHL players invited to the camp, only Luke Evangelista has more points than him. Tullio’s 28 points are also more than Dylan Guenther, Connor Bedard and Shane Wright, who have all played equal or more games than him.
When you have the depth that Team Canada has, there will be snubs. It would’ve been great to see those two in Edmonton, but it’ll still be good to watch Xavier Bourgault on the Rogers Place ice surface potentially.

Similarly to the Oilers, the Condors were hit with a COVID scare, which postponed one of their games. Due to that, they only played one game which came against the San Diego Gulls on Saturday night.
The Condors fell 2-1 after Buddy Robinson beat Olivier Rodrigue midway through the third period. Rodrigue gave them a solid start stopping 19 shots for a 0.905 save percentage. That now back-to-back starts for him with a .900 save percentage or better.
Ostap Safin scored the Condors lone goal late in the second period, with Dmitri Samorkov getting the primary assist.

There isn’t much talk about the European prospects of the Oilers. The one that stands out is Maxim Denezhkin, who Edmonton selected 193rd overall in the 2019 draft.
Denezhkin is currently with Lada Togliatti in the VHL in Russia. He’s producing at just under a point per game rate with 8 goals and 23 points in 29 games for them. He’s not a big forward at 5’10’, but his track record suggests that he has no problem scoring points.
Dezezhkin is the Oilers fourth-highest scoring prospect behind Bourgault, Tullio and Petrov.
News
Team News
Recent articles from Liam Horrobin