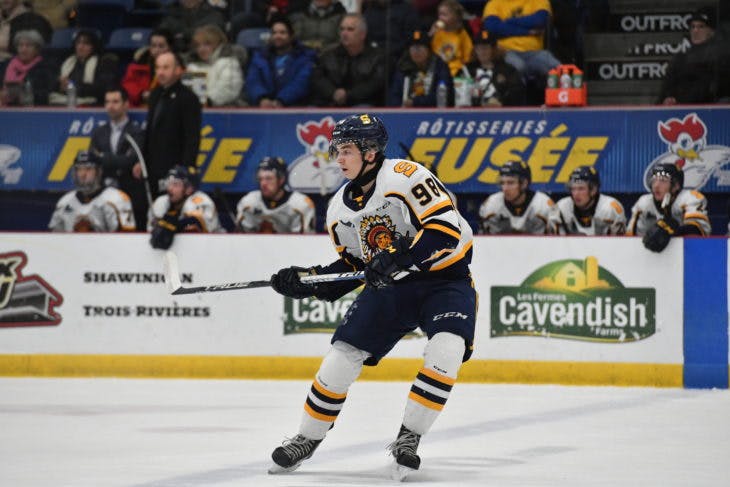 By Liam Horrobin
7 months ago
And then there were two.
Only Matvey Petrov and Xavier Bourgault are the final two Oilers Prospect remaining in the postseason.
Petrov and North Bay are in the OHL Conference Finals while Bourgault and Shawinigan are doing the same in the QMJHL.
Not much else to cover, so let’s see how they are doing.

North Bay On The Brink

Matvey Petrov and North Bay have made it to the conference finals in the OHL. However, they’re struggling heavily to go toe-to-toe with the Hamilton Bulldogs.
They’ve been outscored 16 to 4 and are down 3-0 heading into game four tonight.
Petrov was held pointless in the first two games of the series but managed to break the streak in game three. Petrov scored the game’s opening goal and grabbed a primary assist on North Bay’s third goal which tied the game.
Petrov now has two goals and 10 points in the postseason.

Bourgault Is The Hero

Xavier Bourgault came up clutch for the Shawinigan Cataractes in game two against the Quebec Remparts.
Just over three minutes into overtime, Bourgault broke the deadlock with his 7th goal of the season giving the Cataractes a 1-0 victory. The win tied the series up at one each after Quebec took game one 3-2.
Bourgault will look to guide his team to victory again on Sunday back on home ice.

A couple of members of the Bakersfield Condors said their goodbyes this week.
Ostap Safin and Filip Berglund signed contracts in Europe for next season. They’re both heading back to their home nations with Safin signing with HC Sparta Praha in the Czech Republic. And Berglund heading to Orebro HK in the SHL.
Read more about the deals in Zach Laing’s piece from yesterday.
Nation Takes
Oilers Talk
Recent articles from Liam Horrobin